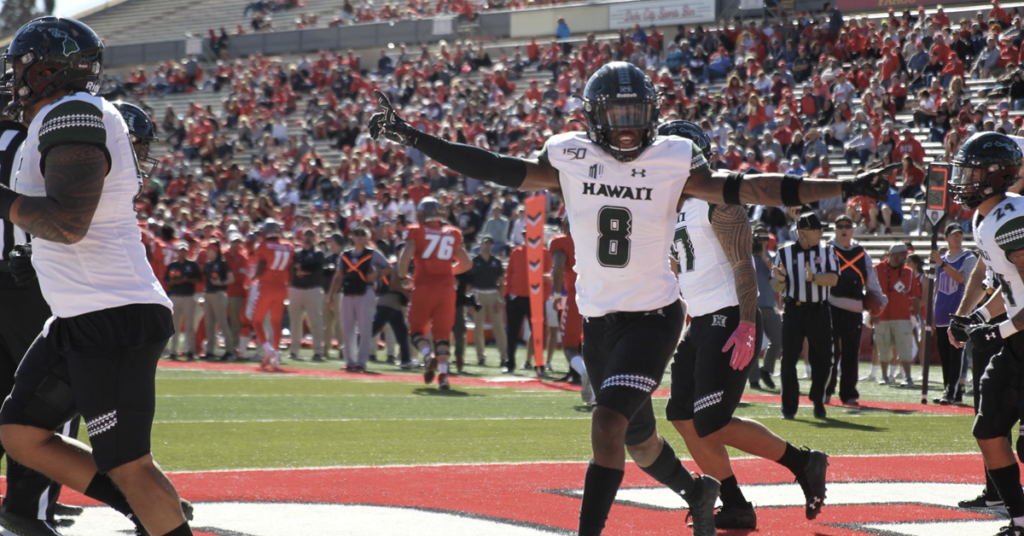 Nick Rolovich should be a familiar face to Bulldog fans. The Hawaii head coach played quarterback for the Warriors from 2000-2001 under former coach June Jones.

Rolovich took on David Carr and the Bulldogs in 2001 and handed them a 38-34 loss, one of the many important games between the two schools.

Rolovich wasn’t around for the alleged screwdriver incident at Bulldog Stadium in 2002, but he’s made in that classic Hawaii mold that the Bulldogs have been facing for years. The schools first met in 1938 and have met every year since 1992. Fresno State holds the series record 28-22-1.

Fresno State will see the run and shoot offense that was a staple under Jones. Rolovich is in his fourth season as head coach and brought back the offensive scheme that Jones ran for years. Its working very well.

Hawaii’s offense is No. 1 in the Mountain West in both scoring and yards gained. The Warriors have a high powered offense that few teams have been able to stop.

The Warriors are 5-3 (2-2 in conference) and started the season with wins over Pac-12 schools Arizona and Oregon State. They lost in Week 3 to Washington, and their two losses in conference were to Boise State and Air Force.

It all starts with quarterback Cole McDonald, one of the top passers in the nation. He’s ranks fourth nationally in both passing yards (2,521) and touchdowns (24). He’s averaging 315 yards per game. He’s No. 1 in the Mountain West in all major passing stats.

This season he added another dimension with his ability to run. His 336 rushing yards is nearly equal to his total last year, which was in 13 games. McDonald is averaging 5.8 yards per rush, more than double his production last season. He’s always been athletic and mobile, but the pieces have come together this season.

He’s had more designed runs called, and he’s been successful with the run-pass option. Last week in Hawaii’s 45-31 win over New Mexico, McDonald broke away on a zone read run for a 76-yard touchdown.

“He’s a big physical guy, and he’s a strong runner,” Fresno State head coach Jeff Tedford said. “I wasn’t aware that he’s as fast as he is, but when he broke out on that run last week against New Mexico he ran away from everybody. So he’s a gifted guy. Not only is he a very accurate passer, but he’s a big physical guy that you’ve got to get on the ground. He’s got speed to take it all the way.”

Outside of McDonald’s success on the ground, the Warriors running game leaves much to be desired. They rank 10th in the conference in rushing, but that’s mostly by design given that they’ve passed the ball 145 more times than they’ve run. Top running back Miles Reed is barely outpacing McDonald with 370 rushing yards.

It’s as pass heavy as a team as Fresno State will see all season, and the Warriors have the receivers to pull it off. Four receivers have more than 400 yards. Cedric Byrd II leads the pack with 689 yards and 9 touchdowns, and JoJo Ward is second on the team with 587 yards and 7 touchdowns.

Defensively, the Warriors have struggled all season. They’ve given up more than 30 points five times and more than 50 three times – 52 to Washington, 59 to Boise State and 56 to Air Force. They did hold Nevada to three points though, so it hasn’t all been bad.

That being said, Hawaii ranks near the bottom of the conference in most defensive categories. Senior safety Ikem Okeke leads a pass defense that ranks eighth in the Mountain West. He’s been the standout player with 3 interceptions. Redshirt freshman cornerback Kai Kaneshiro is having a great start to his career – he’s second on the team with 2 interceptions, including one returned for a touchdown.

As challenging as it is traveling to the islands, where Hawaii is routinely strong, the Bulldogs do have some recent success. Fresno State holds a five-game win streak at Hawaii, and has won seven of the last eight contests.