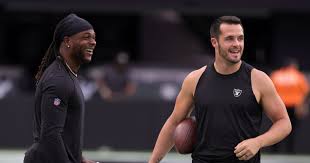 In his first year back with quarterback Derek Carr, NFL star wide receiver Davante Adams will also return to the duo’s collegiate roots to have his jersey retired.

Fresno State announced Thursday that Adams’s No. 15 jersey will be retired at the Oct. 15 homecoming game against San Jose State.

“We are honored to celebrate Davante Adams with this truly deserving tribute. Davante is one of, if not the most, dynamic playmakers we’ve ever had in our proud and historic football program,” said Fresno State Athletic Director Terry Tumey.

“His accomplishments here at Fresno State, in addition to his on-going remarkable professional career, are truly commendable, but who he is as a person will continue to positively impact Fresno State for generations to come. We are excited to welcome Davante and his family back to Fresno State and his No. 15 jersey will be displayed proudly forever inside Valley Children’s Stadium.”

While Adams was a Bulldog for three seasons, he only saw the field for his final two as he redshirted his freshman year.

The two seasons he played, though, were some of the most electric in program history.

Paired with Carr, Adams racked up 3,030 receiving yards and 38 touchdowns – a program record – in his Fresno State career.

His 2013 season was one of the best in the nation as he led all college players with 131 receptions and 24 touchdowns and was second with 1,719 receiving yards – all three program records.

Following his time with the Bulldogs, Adams was selected by the Green Bay Packers in the second round of the 2014 NFL Draft with the 53rd overall pick.

It took Adams a couple seasons to establish himself in the NFL, but he burst onto the scene in 2016 with nearly 1,000 receiving yards and 12 touchdowns, which tied for second in the league.

In his NFL career so far, Adams has recorded 8,262 receiving yards and 74 touchdowns.

Although the Las Vegas Raiders lost their Week 1 game against the Los Angeles Chargers, Adams got off to a good start in his reunion with Carr, posting 141 receiving yards and 1 touchdown.

After being traded from the Packers this last offseason, Adams signed a five-year $140 million contract with the Raiders, which made him the highest paid receiver in the NFL at the time.