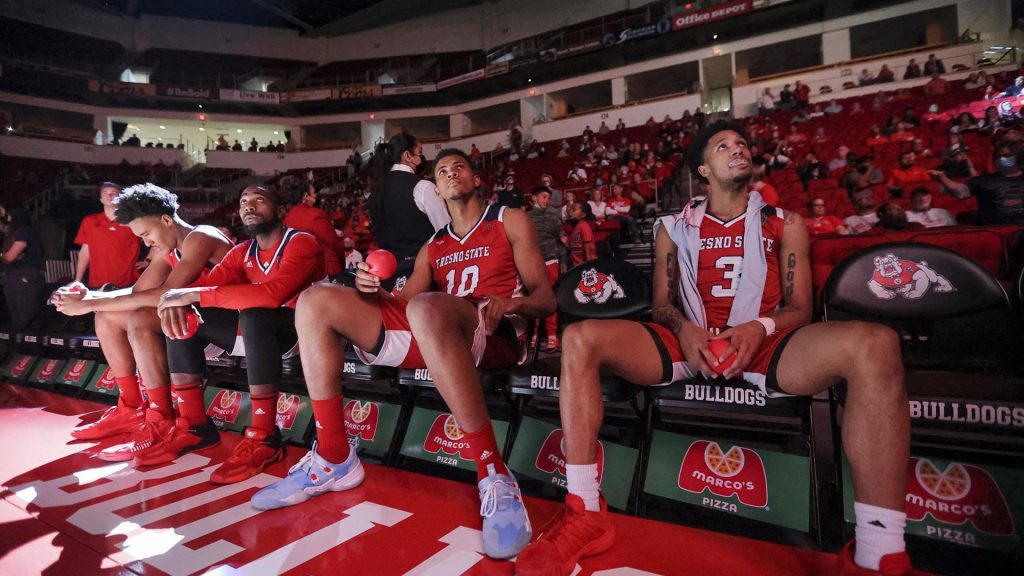 Despite a sizable early lead, Fresno State suffered a collapse within a span of just a few minutes and never truly recovered in a 60-57 loss to UNLV Wednesday at the Save Mart Center.

Fresno State quickly jumped out to a 13-point lead in the first half at two separate times, but with six minutes remaining in the half, UNLV kicked off what would be the start of a 16-0 run over a 4:10 period.

The Bulldogs had their chances to recover – even taking the lead twice in the second half – but the first half collapse gave the Runnin’ Rebels all the momentum.

Despite the collapse, the Bulldogs fought back and had an opportunity as they tied the game at 54-54 with four minutes left, but UNLV put together one final 6-0 run that put the game just out of reach.

While UNLV’s strong runs dominated the floor Wednesday evening, neither team came close to putting together a strong offensive performance.

UNLV only shot at a 40.4 percent clip from the field, but Fresno State managed an even worse 33.9 percent field goal rate.

Unlike past games which saw the ‘Dogs struggle to put the ball in the basket, Hutson was happy with the team’s ball movement.

“We didn’t play well tonight offensively,” Hutson said. “We shared the ball, I don’t think the ball just went in.”

Guard Junior Ballard was a bright spot off the bench with a team-high 14 points, but another off night from forward Orlando Robinson prevented the Bulldogs from coming away with what looked like early was going to be an easy win.

Robinson finished with 7 points on 3-14 shooting, making it the second time in the last three games that he struggled on the offensive end. He saw his minutes limited because of early foul trouble in the second half, which disrupted his rhythm to get anything going near the basket.

While Robinson saw 29 minutes of action on the court, guard Anthony Holland had a team-high 36 minutes but also had a poor shooting performance, finishing 3-10 of the field with 11 points.

Just a few weeks ago Fresno State looked to be one of the top teams in the Mountain West and had an opportunity to stake its claim for the No. 1 seed in next month’s conference tournament.

It even looked like the Bulldogs could earn an at-large bid into the NCAA Tournament with the Mountain West shaping out to be one of the nation’s deepest conferences.

But the ‘Dogs have now dropped three in a row and four of their last six games, leading Hutson to comment on his team’s chances to make their mark in March: “We’re definitely going to have to win some games in the tournament to go where we want to go.”

Fresno State drops to 6-6 in conference, 16-9 overall, and now ranks in sixth place in the Mountain West.