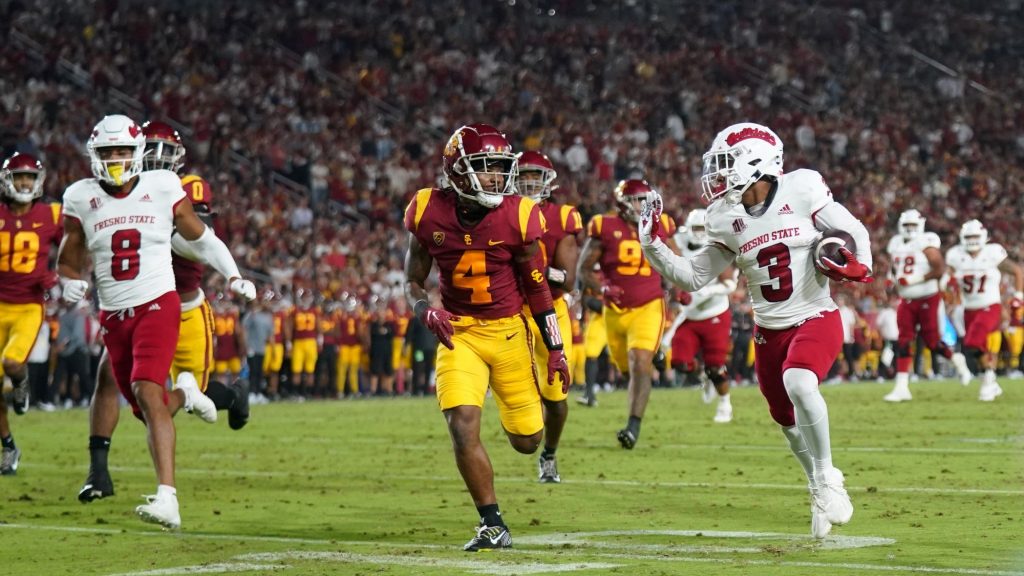 Physically outmatched from the opening kickoff, Fresno State limped out of the Coliseum Saturday night down two of its best players in a 45-17 loss against No. 7 USC.

Senior safety Evan Williams, one of the team’s two permanent captains, was carted off the field in the second quarter after already racking up 5 tackles in the game.

Williams returned to the sideline later in crutches as he was unable to take the field again.

After the game, Head Coach Jeff Tedford said Williams’s injury looked serious and might be a ligament issue in his knee. Williams will undergo an MRI before the team will determine the extent of the injury to see if he will be able to return this season.

Shortly after the start of the 2nd half, Haener suffered a brutal hit that twisted his ankle and required the injury cart to drive out to the field once again.

Tedford said high ankle sprains can take a long time to recover from, but he credited Jake for his toughness and clarified that he will return this season.

The good thing for the Bulldogs is that they enter their first bye week of the season before heading out east on Oct. 1 to face 1-3 UConn.

In Haener’s absence, backup quarterback Logan Fife saw extended action for the first time as a Bulldog and did not disappoint.

Fife finished the game 11 of 12 for 140 yards without any touchdowns or interceptions.

Fresno State’s rushing attack was its most consistent weapon on offense all night. Running back Jordan Mims led the team with 114 yards, averaging 7.6 yards per carry, and backup Malik Sherrod added 47 yards and 1 touchdown, which came on a 32 yard rush shortly after Haener left the game.

Defensively, especially without Williams, the Bulldogs could not do much to stop the talent that USC Head Coach Lincoln Riley brought in through the transfer portal.

Quarterback Caleb Williams threw for 284 yards and 2 touchdowns, but it was USC’s run game accounting for 233 yards on the ground that proved to be too much for the ‘Dogs to handle.

With the loss, Fresno State drops to 1-2 on the season, the worst start since 2019 when they also lost to two Power 5 opponents to open up the season.