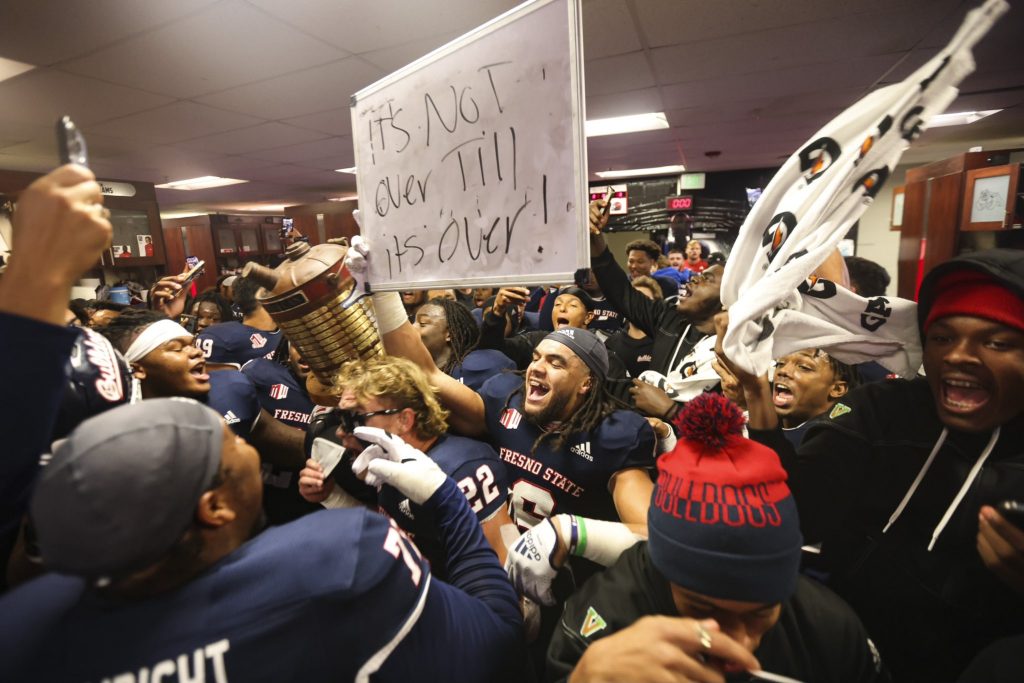 Heading into the fourth quarter after just scoring a touchdown to pull within 11, Fresno State Head Coach Jeff Tedford had a message to his team.

“I told a couple of the guys there going into the fourth quarter that this is what great memories are made of right here when we come back,” Tedford said after the game. “I didn’t expect it to be quite like that, but what an exciting game. It’s a game these kids will never forget the rest of their lives.”

Chance after chance of missed opportunities – interceptions, a muffed punt and getting tricked on a fake punt, to name a few – had the Bulldogs dead in the water long after Tedford delivered his comeback speech based on hope to the team.

Several events in the latter half of the fourth quarter had the ‘Dogs down with no reasonable shot at a comeback.

But rivalry games follow a different nature than the rest of college football, as Fresno State proved by beating San Diego State 32-28 on Saturday.

With just over six minutes left in the game and the ‘Dogs still trailing by 11, quarterback Jake Haener – who made his long-awaited return from injury – threw his second interception of the night, putting the Aztecs in prime position to run out the clock and take the Old Oil Can to San Diego.

That newfound hope was just as quickly lost, though, as Haener threw three straight incompletions and San Diego State blocked the field goal attempt that would have made it a one-score game.

The Aztecs took over at their own 20, but Fresno State’s defense, which had trouble containing the Aztecs for much of the game, forced San Diego State’s first punt of the game.

Fresno State built on that momentum with an 11-play drive spanning 2:46 to score a touchdown and pull within five. Tedford called for a two-point conversion, and Haener hit wide receiver Zane Pope in the end zone to make it 28-25.

What happened next was the greatest moment of Pope’s career, fitting on a day when he had 10 receptions for 143 yards and 1 touchdown.

Fresno State attempted the onside kick in the hopes of pulling off a once in a generation comeback.

Kicker Dylan Lynch kicked the ball with enough movement that made it difficult to handle for the Aztecs, giving Pope just enough time to race down the sideline and grab the ball.

“Executed it great,” Tedford said. “We work hard on that on Fridays, go over and over on that stuff. I thought it was a great kick by Dylan. It was a hard one to handle, and once it bounced off that first guy our guys did a great job of covering it. It all starts with the kick, so we got a really nice bounce off of somebody because it was a hard one to handle. Sometimes if you kick a one hopper it’s so easy to catch, but if you keep them on the ground and they’re squirrely, they’re hard to handle. So that was a really nice kick.”

On the first play of the possession, which started at the SDSU 37 yard line, Haener hit Nikko Remigio up the middle, and the receiver evaded Aztec defenders and ran it in for the game-winning touchdown.

After the kickoff, the Aztecs attempted a shot downfield on the first play, but cornerback Carlton Johnson sealed the game with an interception, a special moment that marked the end of the first game that he ever played for the Bulldogs after dealing with an injury up to this point in the season.

It was by all means a wild and miraculous win for the Bulldogs. As Tedford noted, “It wasn’t perfect by any means.”

San Diego State came out firing and held a 21-10 lead heading into halftime. The Bulldogs had trouble containing Mayden, who was only starting his third game for the Aztecs after playing safety for the first part of the season. He gouged the ‘Dogs for 291 yards through the air and 48 yards on the ground, accounting for all 4 Aztec touchdowns.

For the Bulldogs, Haener saw his first action in several weeks after missing the last four games due to an ankle injury.

His ankle was still noticeably taped up, but Tedford said his quarterback was at full health, and Haener agreed that once the adrenaline hit him and he loosened up after the first few minutes of the game he was good to go.

Although he had 2 interceptions – one of which was tipped – Haener had the type of game that fans have grown accustomed to, going 34-45 for 394 yards and 3 touchdowns.

His excellence through the air was much needed as the ‘Dogs only had 47 yards in production from their running backs, and when accounting for the 7 sacks Haener took, Fresno State actually finished the game with -3 rushing yards.

Along with Haener’s return, the Bulldogs also got wide receiver Josh Kelly and safety Evan Williams back – both of whom also missed the last four games.

Kelly didn’t record a reception, but Williams was second on the team with 8 tackles.

Fresno State didn’t make it through Saturday night unscathed, however. Right tackle Dontae Bull suffered what Tedford called a significant injury and had to be carted off the field. Tedford did not provide an update on what Bull’s injury specifically is.

While the injury bug continues to bite, Fresno State proved its resiliency and did just enough to pull off the miracle win.

Valley Children’s Stadium was far from full at its peak Saturday night, and many fans left as the game looked to be out of hand for the ‘Dogs, leaving what looked like just a few thousand people left to see the improbable victory.

It was a situation that reminded Tedford of the 1982 Cal Bowl, which saw Tedford – who was the quarterback at the time – and the Bulldogs come back from a 28-7 deficit in the fourth quarter to win.

“I thought the people who stayed did a great job. I saw a lot of people leaving though. What it reminded me of is the 1982 Cal Bowl game where we were down 28-7 in the fourth quarter and everybody left the stadium and then listened to it on the radio and tried to get back in. I can’t tell you over the years how many hundreds of thousands of people told me they were at that game the whole game,” Tedford said while laughing.

“I’m like, ‘No you were not.’ Everybody left. But there’s a lot of people who left tonight. Really appreciate those people who stayed, because they did give us an extra boost there at the end, and they did get loud in certain situations. Their last couple series we tried to use our timeouts, and they could put the ball in the air, and it all worked out. That last turnover was awesome.”