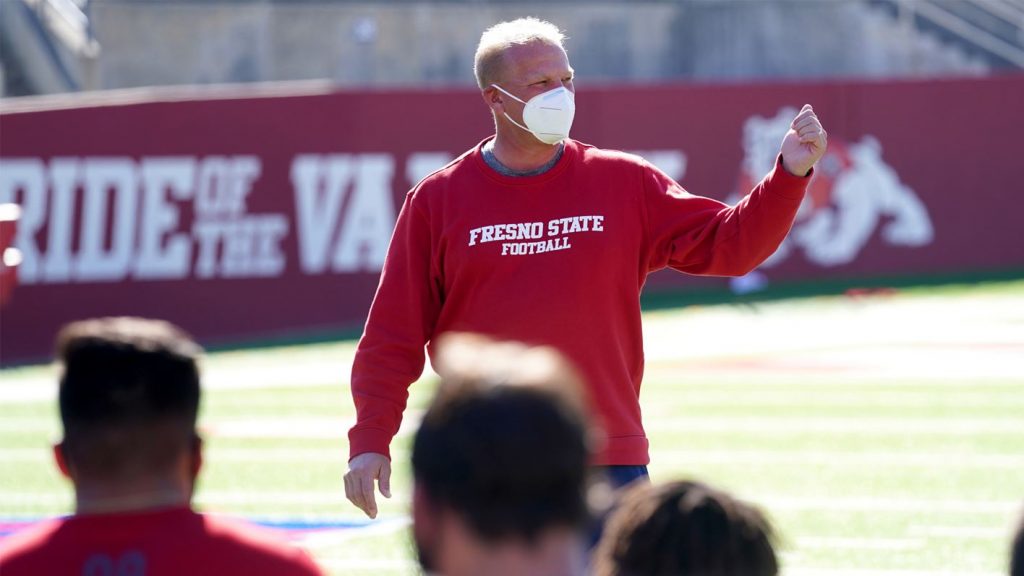 This time last year Fresno State football was supposed to be kicking off the Kalen DeBoer era with the start of spring practice.

Instead, the world shut down in response to the COVID-19 pandemic, depriving DeBoer and the Bulldogs of a spring camp and resulting in a modified season that saw Fresno State finish 3-3.

Now the Bulldogs have just finished up a seven-week training program over the winter and held their first spring practice on Saturday.

“I’ve reminded the guys many times we’re never going to take football in general for granted,” DeBoer said after practice. “It’s something I think the guys really have paid attention to, and once in a while when you feel the energy isn’t quite there on a 7 a.m. run, you remind them, ‘Hey, we didn’t have a chance to do this a year ago.’ Quickly it snaps them right back into the right mental frame.”

Quarterback Jake Haener won the starting job in fall camp last year and went on to post numbers that have not been seen since Derek Carr slung the ball around Bulldog Stadium.

Spring practice offers Haener and his teammates the opportunity to grow together and build chemistry.

“We just want to maintain an upward trend on offense, keep being explosive, grow together and just limit turnovers,” Haener said. “Just staying within ourselves and just trusting the system and doing what we do, I think that’s going to take us a long way with the growth and the foundation that we’re trying to set with our offense. And I think we like where we’re at.”

Since the NCAA granted all players an extra year of eligibility because of the pandemic, Fresno State is returning nine starters on offense.

Key to the group is star running back Ronnie Rivers, who is tied for first in program history with 44 touchdowns.

“I was super ecstatic,” DeBoer said regarding Rivers’ decision to return. “He even kind of pushed me till the very end in telling me before he announced to the entire world. I just think the way he operates day-to-day, our team – obviously the Red Wave – just all have such a great respect for who he is.”

Haener added, “Having Ronnie, it’s really valuable to have a guy like that who’s been here who’s honestly going to be considered one of the best football players in Fresno State history. To have him in the backfield with me and just being able to have that outlet to get the ball in his hands is awesome to have, and it’s great to have confidence in a really good running back.”

Defensively, all 11 starters return for the Bulldogs, including Sanger native Arron Mosby, who is moving to defensive end from linebacker.

DeBoer compared Mosby to former Bulldog linebacker/defensive end Mykal Walker – who recently wrapped up a very successful rookie season in the NFL with the Atlanta Falcons – calling him a “hybrid guy.”

Mosby said the position change is a big one, but the similarities between linebacker and defensive end make the transition easier.

“You’ve got to be a little more physical going down there in the trenches with the big boys,” Mosby said.

In total, 14 “super seniors” opted to play another year for the ‘Dogs, leaving DeBoer with a stacked roster.

“We’re over 80 guys, and that’s not typical in a spring format,” DeBoer said. “There’s a lot of guys fighting for reps, and the competition is great. The competition always makes you better. I think it’s been great because guys are really pushing themselves to make sure they know when they get that rep they’ve got to take advantage of it.”