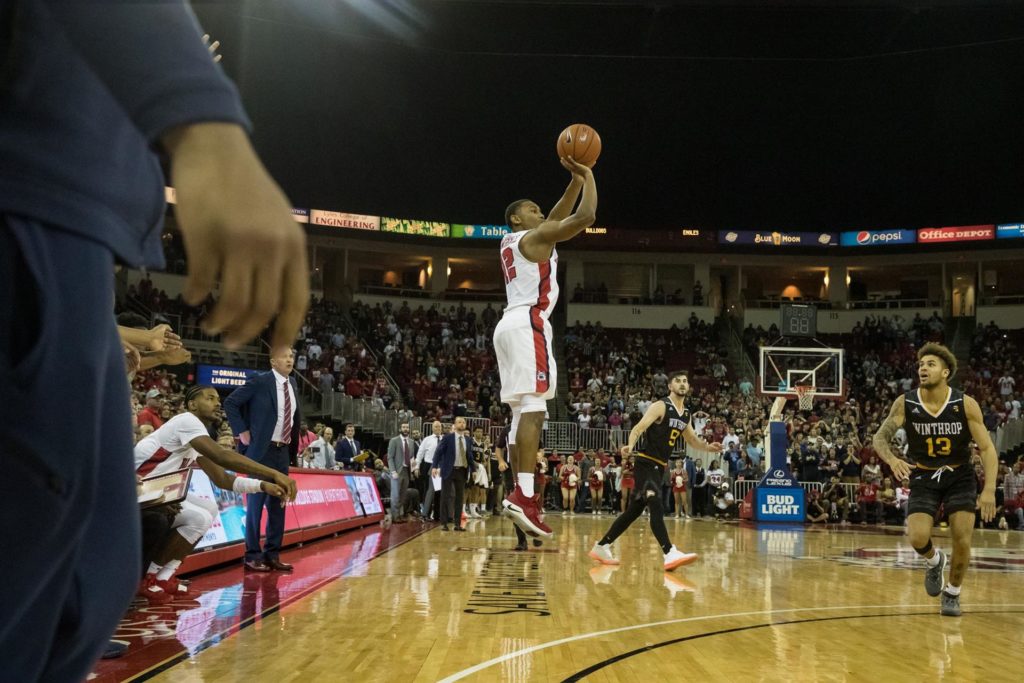 The pressure wasn’t too much for the Bulldogs Sunday. With Paul George sitting baseline at the Save Mart Center for his jersey retirement ceremony and members of the Los Angeles Clippers in attendance, Fresno State pulled through with a buzzer beater three by junior guard Mustafa Lawrence to beat Winthrop 77-74.

Multiple Bulldogs made their home debuts Sunday, including Lawrence and freshman guard Jarred Hyder, who scored a game-high 26 points.

“You didn’t know what was going to happen coming into the game with eight new guys and five freshman, and your starting guard out, and playing a really good team that runs hard stuff to guard that spreads you out that can play a big guy inside,” Fresno State head coach Justin Hutson said.

“What you should bank on is to play hard and play together, try to stay emotionally stable, move into the next play, see if the coaching staff can help in any way with adjustments – but to have guys step up like they did was not a surprise, but it was very optimistic for our future.”

Starting senior guard Noah Blackwell missed his second of three games due to a suspension for violating team policy, so Fresno State was shorthanded from the start.

The Bulldogs went down early and found themselves in a 19-10 hole at the midway point of the first half. They battled back and finished out the half strong with a 9-0 run to head into the locker room with a 35-30 lead.

Whatever momentum the ‘Dogs built heading into halftime was quickly lost as Winthrop battled back.

After a tightly contested second half, Hyder sunk a three – his fifth of the game – with 17 seconds left. But, once again, Winthrop answered with a three of their own, leaving the Bulldogs with 4 seconds on the clock.

Instead of calling a timeout and setting up a play, Hutson trusted Hyder to take the ball down court and make a play, and the freshman found Lawrence in the corner for the game-winning shot.

“It was no panic,” Lawrence said. “Coach Hut always has us prepared not to panic in situations like that – freshman bringing up the ball like that. I knew to get to my spot. My first three steps had to be hard. I was sitting there waiting for it, and Jarred made a great play.”

Although Hyder already figured to play a prominent role, he had to step up since senior guard New Williams had to leave the game with an injury.

“New’s back has been hurting him a little bit, and I think he tweaked it in the first half,” Hutson said. “He drove into the paint with his left hand and ran into somebody. I think it was a charge play. And he tried to get it out, but as I saw him limping up and down the floor then I got him out.”

Senior forward Nate Grimes came through in a big way with 15 points to go along with 15 rebounds. Lawrence was the only other Bulldog to score double digits, contributing 13. He hit all three attempts from the three point line.

Hyder’s performance showed he’s not too young for the spotlight. He only scored 2 points in the opening loss at Oregon, but he bounced back in a big way as the Bulldogs’ most crucial player Sunday.

“It was exciting coming into this game,” Hyder said. “I knew the energy was going to be good from the crowd. Coming in as a freshman, sometimes it’s hard to really get comfortable right away. My teammates did a great job preparing me every day.”

Winthrop’s gameplan was centered around the three point shot – the Eagles attempted 34 of them, hitting 13. Guard Russell Jones Jr. led the Eagles with 15 points and was a problem for the Bulldogs all night from beyond the arc.

Fresno State evens its record at 1-1 and travels south to face the University of San Diego (0-2) on Tuesday.

“Coming into here, I was told that Fresno’s a great community and great fans to play for,” Hyder said. “They really showed tonight, and we really appreciate everyone that came out today to support us.”