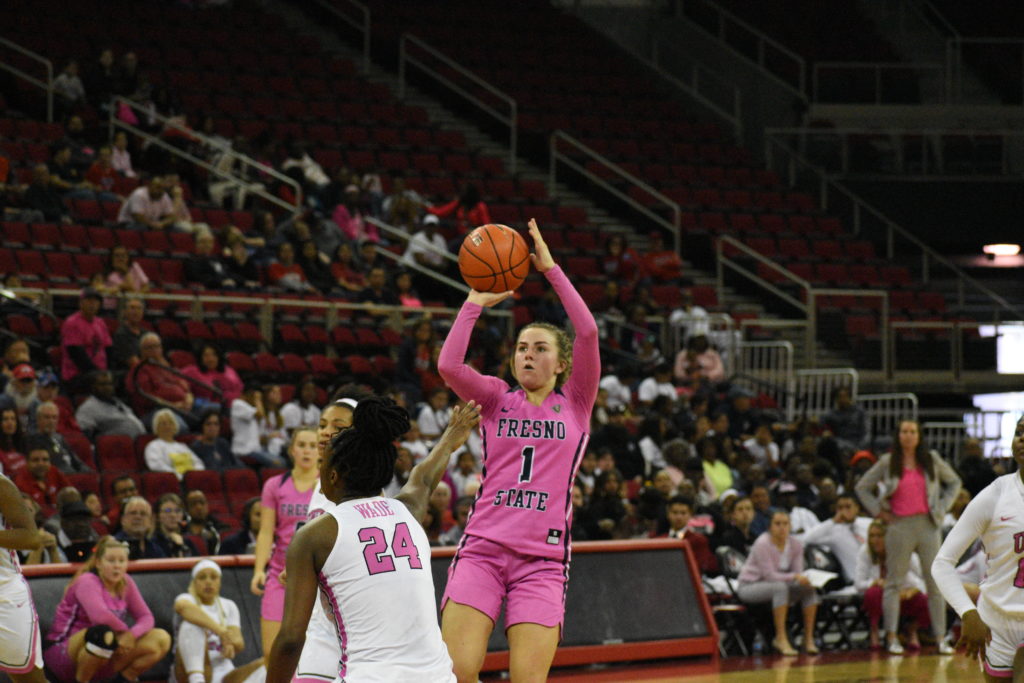 UNLV brought a tough, physical team into the Save Mart Center Saturday afternoon, but the Bulldogs didn’t flinch, taking whatever challenge the Rebels threw their way and came out with a 72-58 win.

“We knew this was going to be a tough game, and I think UNLV is very physical and athletic and talented and probably a little taller in some areas, but I thought our kids did a good job,” said head coach Jaime White.

It didn’t matter though. Fresno State out-rebounded the Rebels 42-35, and seven Bulldogs had at least 3 rebounds.

“To out-rebound a team like that was fantastic,” White said. “I think that was our focus from the get-go. If you look at it, we had rebounding from just about everybody one the team, so that was nice.”

Fresno State struggled to score out of the gate as the Rebels took an early 8-3 lead, but after a few minutes, the ‘Dogs found their rhythm and went on a 14-point run.

Utti was the most dominant player on the floor in the first half. In a game where the Bulldogs struggled from the three-point line – making only four of 22 attempts – Utti’s presence in the paint made all the difference as she scored 20 points in the half.

The Bulldogs went into the locker room at halftime with a 38-23 lead, and even though the Rebels kept applying pressure in the second half, the ‘Dogs never let up.

Utti offensive dominance didn’t carry over into the second half – she missed her one shot attempt – but freshman guard Hanna Cavinder was on all night and led the ‘Dogs with 24 points.

It was as physical of a game as the Bulldogs will play all year. Wade was the focal point for the Rebel’s offense, leading the team with 21 points and 11 rebounds, but the Bulldogs played tight defense and forced her to ultimately have an inefficient performance. Wade was 6-17, although she did go 9-12 from the free throw line.

“We knew UNLV was going to be physical, because they have in the past, and they’re bigger than us, so we just kind of had to try to match that,” Utti said. “I think overall we did a pretty good job at getting them fouled and also being physical with them.”

While UNLV was focused on getting the ball to Wade in the paint, the Bulldogs played their typical fast-paced offense and excelled with moving the ball around. Fresno State finished with 17 assists as a team, while the Rebels only managed 6.

White praised the transition offense from her three guards – Hanna Cavinder, Haley Cavinder and Aly Gamez. Haley Cavinder scored 8 points, all in the second half, and Gamez added 14.

Fresno State improves to 20-4 overall and 13-0 in the Mountain West after taking care of the third place Rebels. With only five games remaining in the regular season, the Bulldogs have a shot at going 18-0 in the conference.

“I just think that we’ve definitely grown to work together really well, and we have a lot of different parts and a lot of different people that step up every game, so it’s just been really fun to play with this group of girls,” Utti said “And we work hard every day and compete, and I think that’s our main thing.”

Second place San Jose State is up next for the Bulldogs. The Spartans lost to Nevada on Saturday, so the Bulldogs hold a three game lead heading into Wednesday’s matchup. If the Bulldogs win, they will clinch a share of the Mountain West regular season title.

“Really exciting, as a coach, you don’t have to say much when the players know we had such a great game against San Jose when we were there,” White said. “It’s just exciting. I think we’re dialed in as far as game plan goes, and then I think this time of year everybody needs to stay healthy and happy and continue to work hard, but also be smart.”