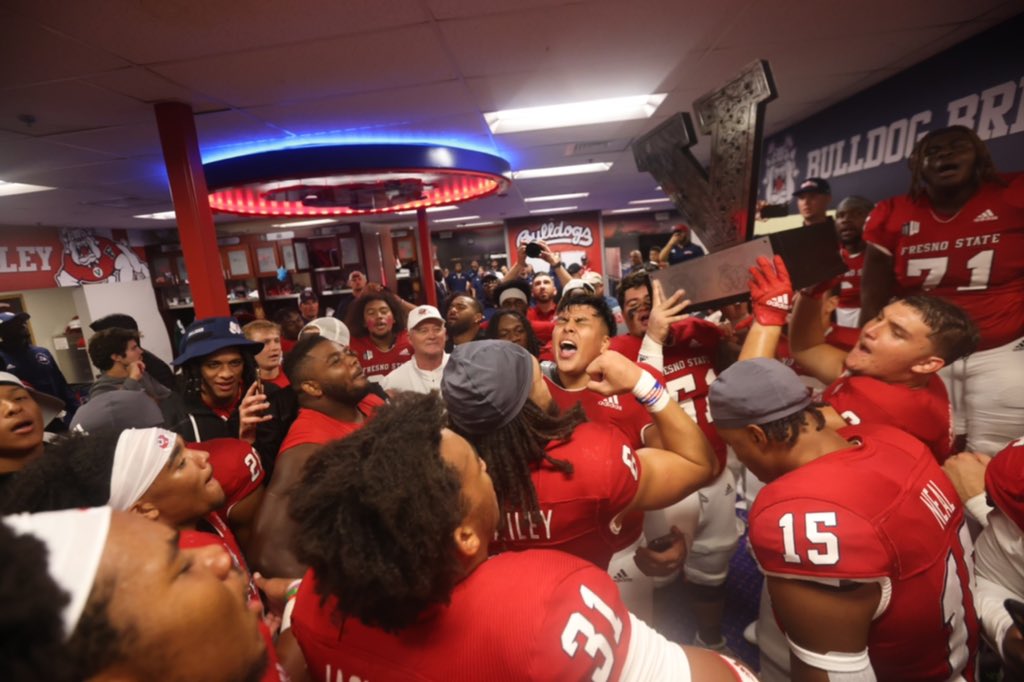 Coming off four straight losses, Fresno State’s defense stepped up and helped the Bulldogs bounce back with a 17-10 win over San Jose State.

The win, though, was just one of many happenings on Saturday for the ‘Dogs.

First and foremost, the Bulldogs improved to 2-4 on the season and 1-1 in Mountain West play. San Jose State had looked like the best team in the West Division heading into Saturday, but now the Bulldogs are in the driver’s seat and control their destiny in their quest to win the conference title.

The win also put Head Coach Jeff Tedford back on track. Dating back to the end of his first stint with the Bulldogs in 2019, Tedford had lost eight straight games against FBS opponents.

Saturday’s win, though, was a statement win for Tedford, a win that came in spite of the many injuries still plaguing the team.

Quarterback Logan Fife played his best game of the season so far, quelling some fears that he wouldn’t be able to lead the team to victory against conference opponents while starting quarterback Jake Haener remains on the sidelines.

The game was only half the fun. Former Bulldog and current Las Vegas Raiders star Davanta Adams was honored at halftime with his jersey retirement. Teammate and fellow Bulldog legend Derek Carr was also on hand to celebrate.

But not everything worked out according to plan Saturday.

Adams had been scheduled to hold a press conference before the game and speak with the team. At the eleventh hour it was revealed that Adams had an issue with his plane and would not make it in time to meet with the media or the team.

There was also an incident with Fresno State’s assistant coaches in their booth adjacent to the press box that reportedly resulted in a young girl suffering an injury.

Near the end of the first half with the ‘Dogs up 7-3, Fife was sacked and fumbled the ball on the play. San Jose State recovered the ball and ran it 13 yards to the Fresno State 32-yard line with 30 seconds left in the half.

On the next play, San Jose State quarterback Chevad Cordeiro hit receiver Elijah Cooks in the end zone for a touchdown to take a 10-7 lead.

Immediately after the Spartans took the lead, yelling and banging noises could be heard in the press box coming from the adjacent coaches’ booth.

Those noises were followed by the sound of glass breaking. People in the press box can partially see into the coaches’ booth. Whatever reaction the assistant coaches had to San Jose State’s touchdown resulted in a broken window, which rained down untempered glass on the fans sitting below.

GV Wire reported that a young girl was injured and required stitches.

When asked about the incident after the game, Head Coach Jeff Tedford said he was unaware of what happened until asked.

After giving up 40 points to Boise State last week, Fresno State’s defense completely flipped the script and put up its best performance of the season against the Spartans.

San Jose State was averaging 28.8 points per game and 380.6 yards per game heading into Saturday.

Fresno State held the Spartans to their lowest scoring game of the year and only gave up 331 yards in the process.

The secondary had a vastly improved performance from previous weeks, breaking up 12 passes. San Jose State only recorded one pass breakup all game.

While the defense excelled, Fife and the offense did just enough for the ‘Dogs to end up victorious.

While Fife had an interception and a fumble, he went 22-32 for 230 passing yards and 1 touchdown, earning Tedford’s praise.

Fresno State travels to 2-5 New Mexico next Saturday before returning home for another rivalry matchup against San Diego State.