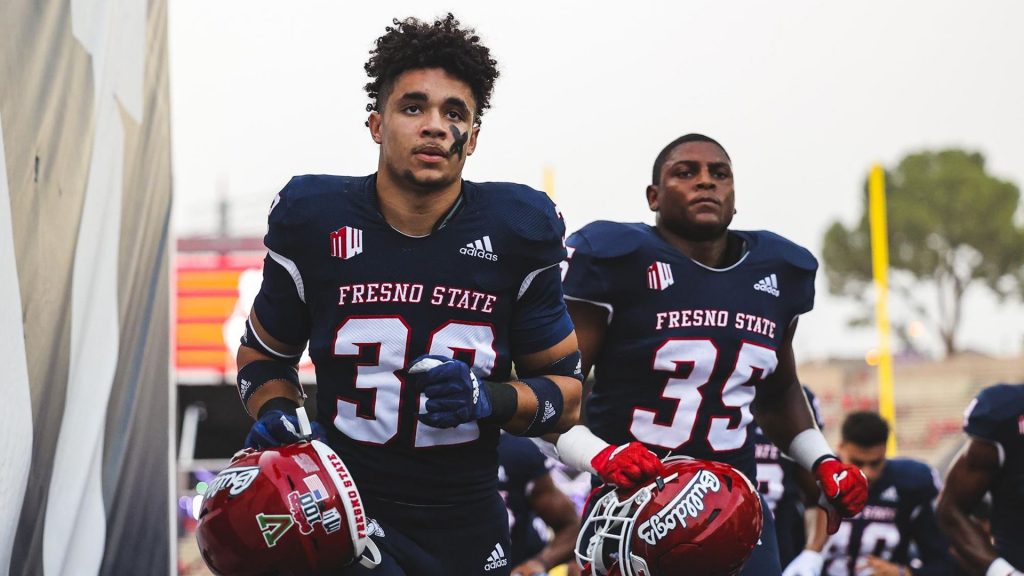 Coming off some rest with the bye week, Fresno State’s defense performed in dominant fashion pitching a shutout on the road as the Bulldogs beat Wyoming 17-0.

The defense set the tone from the start, forcing a fumble on Wyoming’s first possession to give the offense the ball at the Cowboys’ 41 yard line.

Fresno State capitalized on an 11 play drive to the end zone as quarterback Jake Haener hit tight end Juan Rodriguez for a touchdown to take an early 7-0 lead.

That turned out to be the path to victory for the Bulldogs as they scored all of their points on drives that started with turnovers. In addition to the early fumble recovery, the ‘Dogs snagged 4 interceptions and gave Wyoming quarterback Sean Chambers little room to work with.

“The defensive energy, the defensive playmaking ability – those balls that are tipped, they haven’t gone our way a lot of times, and when you hustle and you’re flying to the ball, you make your breaks,” Head Coach Kalen DeBoer said after the game.

“I think that’s really what happened today. Guys made their breaks. There were some plays that were made defensively where maybe we just missed it one time and then we executed it better against the same play the next time. I’m really proud of the way the guys just came off the field.”

Safety Evan Williams came down with 2 interceptions, while safety L.J. Early and linebacker Malachi Langley each added one apiece.

Evans and the defensive unit held Chambers to 111 passing yards on a 34.8 percent completion rate. The defense was so stifling that Wyoming pulled Chambers – a Kerman native – in the fourth quarter for backup Levi Williams, who only completed 1 pass on 7 attempts.

“It just felt great, just knowing that you kind of demoralize the team into that,” Evan Williams said. “They threw everything at us, and we had all the answers. It just feels great to know we have that type of power, and when we’re at our best we can operate like that, we can operate at the highest level. That just felt great, big confidence boost heading into this next week.”

While Wyoming found little success on offense, the Bulldogs nearly struggled just as much. But a turnover-free, clean performance was just what they needed to come home with a win.

The gameplan was simple from the get-go: Set the tone with the offensive line and running backs Ronnie Rivers and Jordan Mims.

While Haener had 2 touchdowns, he only managed 96 yards through the air on a 53.6 percent completion percentage.

That left it up to Rivers and Mims to get the job done. The duo combined for 151 yards on the ground. Mims was particularly effective, averaging 6 yards per carry.

“I thought they both had their times where they just really did a good job of taking care of the football, first of all, and getting those hard yards, finding some seams. It’s really cool to see Jordan, because he’s always ready to go,” DeBoer said.

“Jordan’s becoming a team favorite I think behind the scenes, just because when he gets his opportunities, he’s just taking advantage of it. I’m proud of how he and Ronnie work together every single day in practice and how together they just lead the running back corps, as well as the offense.”

The fact that the game turned into a grind-it-out physical fight was not surprising to the Bulldogs. Even though they turned the ball over six times in the 27-24 loss at Hawaii two weeks ago, the defense had its own questions to answer after blowing a late lead.

“We kind of just made it an emphasis – it wasn’t going to be us,” Evan Williams said. “It wasn’t going to be the defense that’s letting up the points. Everybody can point their fingers to us to why we gave up the game, and we took that personal two weeks ago. We took that to heart, and I’m just so proud. I love the aggression and just everything we played with today, I love that, and I want to see it for weeks to come. So we’re just going to try to build on it and keep going.”