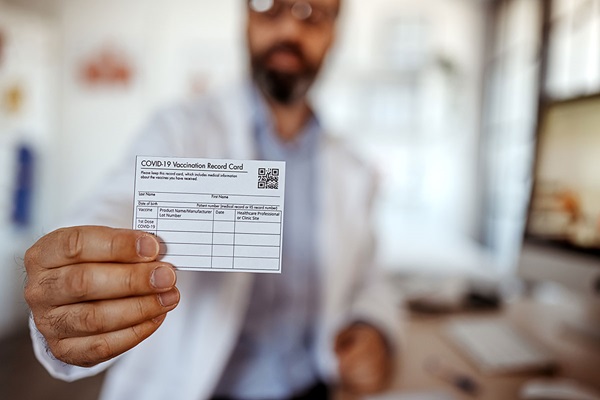 Oct. 12, 2021 – With San Joaquin County Supervisor Kathy Miller noticeably absent, members of the Board of Supervisors unanimously approved a resolution barring the use of vaccine passports to gain access to indoor government establishments and advocating businesses follow suit.

Debate on the vaccine verification scheme lasted nearly two hours stretching from Tuesday morning into the afternoon, with as much of the debate focused on the efficacy of the coronavirus vaccine to the concepts of passports themselves.

At the heart of the matter: a debate on freedom of choice in medical decision making.

The vast majority of residents commenting on the measure, proposed by Board Chairman Tom Patti, said the vaccine requirements in Los Angeles and San Francisco infringed on key rights.

“It’s a god-given right to be able to move around freely in the communities that we live, work, and support,” one speaker said early in the debate.

“I chose to get the COVID-19 vaccine several months ago and I typically choose to get the flu shot each year, but that’s my choice – well occasionally my wife has some input in that,” said small businessman Steve Colangelo said to laughter from Board watchers.

He walked through recent efforts by Gov. Gavin Newsom to mandate vaccination among the state’s school children, citing a slow removal of choice in medical decision making.

“I urge you to send a strong message today: No to the mandates and no to the passports.”

During debate, Supervisor Miguel Villapudua concurred with residents that the fundamental issue behind requiring proof of vaccination for access to certain accommodations was a removal of personal choice.

“I get it, I don’t think anyone’s arguing with you,” Villapudua said. “We’re in America, you choose what you what you want to do with your body, your life. I support you and I hope this passes.”

“We have heard for decades ‘My body, my choice,’ but here it seems to be something ignored,” Winn said.

He noted that his concern over coronavirus policy overreach stretched back to the declaration of “essential businesses” for national chain establishments over homegrown businesses in the early aughts of the pandemic.

Patti, the measure’s author, deliberated with County Counsel J. Mark Myles over the potential to enact an ordinance to extend the bar on vaccine passports to subsidiary governments and businesses, as the resolution only contains an advisory for businesses.

“I stand in support of the vaccination if that’s what a person so chooses, I’m sure that we all do,” Patti said in concluding the debate. “But we should not be penalizing our businesses, those in our community, our children nor ourselves for a freedom of choice.”

Oct. 11, 2021 – With two of the state’s largest counties adopting requirements barring access to indoor establishments without proof of vaccination, one Valley county is angling to head in the opposite direction.

Tuesday, the San Joaquin County Board of Supervisors will debate a ban on so-called vaccine passports, proposed by Board chairman Tom Patti.

“Our businesses have suffered throughout the Pandemic,” a memo from Patti reads. “This unnecessary restriction will further erode many businesses ability to survive by eliminating a larger percentage of the un-vaccinated population from entering, working, [or] using specific businesses or government services.”

The resolution describes currently enacted vaccine passport requirements in communities including Los Angeles and San Francisco as “the next generation of a ‘Show me your papers’ totalitarian regime.'”

As written, the legislation would ban the requirement that residents and visitors furnish proof of vaccination for entrance into county offices or premises.

Reid Stone and Alex Tavlian contributed to this report.