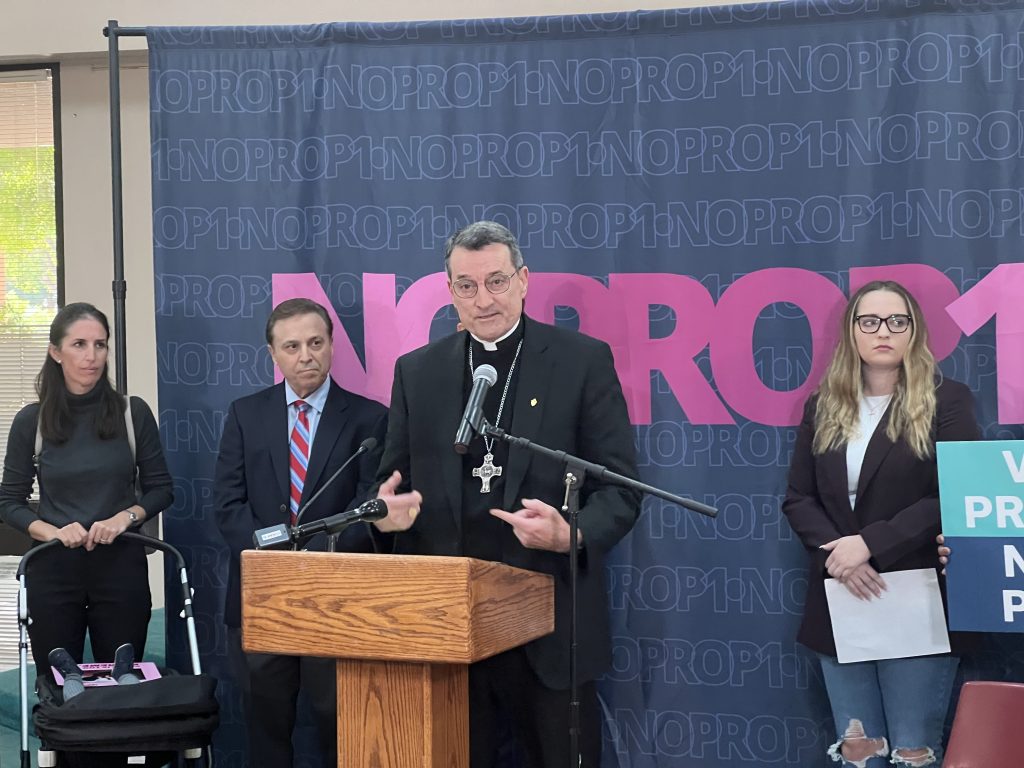 The spiritual leader of the Central Valley’s Roman Catholic population is urging voters to oppose a state ballot measure that would protect abortion.

Proposition 1 would amend the California Constitution to say that the state cannot deny or interfere with a person’s reproductive freedom.

“At this time it should come as no surprise to anyone that the California Catholic Conference of Bishops is in total opposition to Proposition 1, the amendment to the State Constitution which as many of you know would enshrine the right of abortion at any time for any reason, in a sense for no reason at all other than to take the life of a baby,” Brennan said.

Brennan acknowledged that some people think the church and politics should not mix.

Brennan argued that Proposition 1 would allow for unrestricted and unregulated late term abortion through all nine months of pregnancy.

He also said that the amendment could eliminate the ability to advocate for any reasonable limits of abortion in California, as well as putting religious freedoms and conscious protections at risk.

John Gerardi, the Executive Director of Right to Life Central California, Fresno City Councilman Garry Bredefeld and Addison Worth, the President of Students for Life at Fresno State, joined Brennan in their opposition to Proposition 1.

“Existing California law limits abortion to the period prior to fetal viability. Viability is the point in pregnancy where theoretically a child could survive being delivered, somewhere between 22 and 24 weeks of pregnancy. After that abortion is only legal if a healthcare provider determines there is a threat to internat health. The text of Proposition 1 is amending the California Constitution,” Gerardi said.

“So we have those existing protections for abortion in normal California laws. Prop 1 is changing the California Constitution. It’s our fundamental law in the State of California. It’s going to override anything prior that’s been passed in normal statutes if they contradict it. Proposition 1 is much broader than prior California statutes regulating abortion. It simply says that there can be no state action denying or even interfering with a person’s right to have an abortion.”

Bredefeld called on all Christians and Jews in California to speak up and stand up to Gov. Gavin Newsom and the government and to preach morality.

Brennan added a comparison of life after conception to life on Mars, arguing a hypocrisy among many elected officials.

“You’ve heard this before, but it’s a great analogy. It they were to discover on Mars a single cell life form surviving under one of the ice caps of the Martian planet, the headline would be: Life found on Mars, and it would include a story about how this is Martian life,” Brennan said.

“And there would be politicians falling over themselves to be the first to propose legislation that would protect that life and persecute to the fullest extent of the law anyone who takes that life or destroys it – single cell creature. Brothers and sisters, as soon as conception takes place we’re talking about more than a single cell animal. We’re talking about human life who will become that beautiful baby, a beautiful fetus in the womb.”