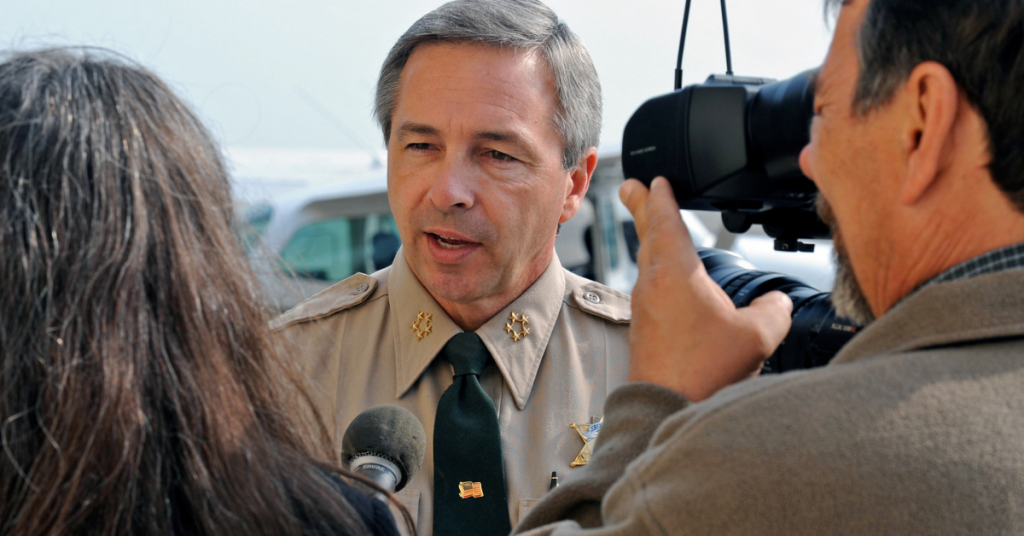 With much of the attention focused on two Fresno City Council members contending for an open Assembly seat anchored in Merced County, it’s easy to forget that there is a Republican in the race.

Nearly a decade removed from his time as the Merced County Sheriff, Mark Pazin is running in the four-man field for the 27th Assembly District.

The district opened up after Asm. Adam Gary (D–Merced) announced his candidacy for Congress, opening the door for Pazin and others to enter the arena.

The 27th district covers Merced, Madera, west Fresno and much of the western Central Valley. Democrats hold a 15 percent voter registration edge in the district, while President Joe Biden won the area by over 13 percent in 2020.

Pazin, who served as the Merced County Sheriff from 2003-2013, is running as a Republican and spoke to The Sun about the race:

Daniel Gligich: Why are you running for the Assembly?

Mark Pazin: “This district is going to be very important to basically get the Republican Party on the Assembly side out of what I call the superminority. There’s very little leverage when the other side of the aisle has what I call a super super majority. For me the negotiation process needs that flexibility and leverage so everybody can come to the table to work for better conditions here in California.”

DG: You were the Merced County Sheriff for an extended period. Can you tell me about your time as sheriff as well as your background in law enforcement?

MP: “Basically I have been in the public safety sector in one form or another. I started off as an emergency medical technician with a local ambulance service during my early years and then went into the law enforcement field as a deputy sheriff for Merced County. From there, just went through the ranks. I did detectives and worked our violent crime suppression units going after parolees at large. I was picked by then-sheriff Tom Sawyer to go to the, what I call, prestigious FBI National Academy back in ’94 and came back with much more knowledge as I interacted with law enforcement from around the world. That graduating class from the FBINA really set the tone for the rest of my law enforcement career where I was able to interact with a lot of federal, state and local agencies. From there, I was promoted and then as luck would have it Sheriff Sawyer retired, there was an opening and I ran in 2002, reelected in ’06 and reelected in 2010 – which was also a capstone of achievement. I was elected by my peers to lead the California State Sheriffs’ Association and was able to work with a lot of legislators. I saw how the sausage was made during that time. As you start to go through the chairs – sergeant at arms, first vice president, then president, treasurer, secretary and such – you do a lot of interaction with state officials and state legislators both on the Senate and Assembly side. So I saw how the negotiation process works, and it was a great tutorial for me going through the chairs of the California State Sheriffs’ Association eventually leading to my presidency.”

DG: What have you done since you retired as sheriff?

MP: “I’ve been working as the law enforcement chief for the California Office of Emergency Services for the past few years. I was appointed by Gov. [Jerry] Brown as his law chief over there, and I’ve been working with what I call this three-tiered environment over at Cal OES (Office of Emergency Services). We have a law enforcement branch, fire and rescue and of course the emergency management. It was also a great experience working with FEMA (Federal Emergency management Agency), working with all the other state agencies through these disasters, providing law enforcement mutual aid for my counterparts up and down the state. Over the past few years we’ve just had a series of just horrific disasters, people have perished. Most notably was in Butte County, the Paradise Fire, over 80 persons died in that fire. And then as part of my portfolio, I also managed the mass fatality system for the governor’s office and CalOES, so that was pretty horrific.”

DG: Moving from sheriff to politics is quite the change. What makes this the right time to make that jump?

MP: “The time is right. This seat is open due to redistricting that as you well know happens every 10 years. Fifty-two percent of the vote is from Merced County, then it goes on through Madera, which I have great connections, and on through into Fresno County, which I have a lot of law enforcement friends. I have family in the Fresno area – my mother, God bless her soul, a number of cousins and such. I’m a Central Valley native, third generation Mercedian, and by extension that makes me a third generation Central Valley person. I’m easy to work with, try and remain unflappable in some of these very trying times, and I just believe it’s a good fit. Right now, after seeing the pendulum swing into this kind of open chaos where law enforcement has become the focal point and seeing what has happened – catch and release – we need to stop that nonsense and we need to start embracing what the law enforcement community does. Also what is going on with the fire and rescue component. There was a firefighter captain in Stockton that was shot and killed responding to a fire here just recently. For whatever reason it seems to be an open season on public safety in regards to what vehicle you drive. If it’s a patrol car, a Type 1 fire rig or an emergency management, we’ve got to stop that and we need to give the financial resources to our public safety to ensure that government’s first priority is protecting the public.”

DG: What are the top issues Assembly District 27 faces?

MP: “The three counties for the most part have a common denominator thread. It is public safety. I was part of the Ag crime task force. The state gave money to the sheriff’s offices to form a task force to stop thievery of anything that’s not nailed down. The other issue is water. When you have to fallow acres and acres because there is no water due to the drought, well the common cause of this we haven’t negotiated properly in raising – for instance Exchequer Dam here in Merced-Mariposa with the Merced Irrigation District. If you were just allowed to raise that 5-10 feet, that is just thousands and thousands of acre-feet of water that could be reserved for these droughts. We have not built anything lately. I know there’s one in Colusa. But it’s just all been talk. We need somebody in there to roll up their sleeves, say there is a fine balance that we’re going to have to find or the breadbasket that we know as the Central Valley is going to go dry. And with that fallowed land are less jobs, less jobs means less employees, less employees means less tax base. So the cascading effects over water is not lost on me, and that’s going to be one of my priorities.”

DG: With Democrats holding a 15 percent edge in the district, what gives you the confidence that you can secure votes from the other side of the aisle in order to win?

MP: “I’m right-of-center. I’ve worked with Democratic Senators and Assembly members throughout my whole career. The focus here is going to be public safety, in which there is no registration. You never know who’s going to be a victim. So I want to bring that to the table and go. There are some in this race that were part-and-parcel to wanting to defund law enforcement. Again I hearken back to my first comment – government’s first priority is to protect the public, and that’s my theme. The second pillar is going to be water, even if we have to somehow reintroduce recharging in some form or fashion the aquifers underground. The other, in talking to some other folks, is desalination plants, to put those down in L.A. if I could bring everybody together. I know it’s going to cost some money, but I tell you a lot of the water that is from Northern California is going straight to the parched areas of LA. So we’re going to have to take a comprehensive look on that. The other is taxes. For heaven’s sake, every time you turn around, if it moves, tax it. If it talks, tax it. It’s just incredible, and we have billions of dollars in reserves, let’s use it wisely. It goes back to my other comment for the Assembly district, that we’ve got to get out of that status where we’re kind of getting steamrolled by the super majority and there’s no negotiations.”

DG: If elected, how do you plan to operate in the super minority being vastly outnumbered by Democrats?

MP: “It’s not lost to me. It’s going to be a herculean effort. I’ve always said this in my law enforcement role: I may not know everybody in law enforcement, but as I go to seminars and meet with people, relationships need to be built prior to an incident, prior to a disaster. And I think that’s what one of my great strengths is, is able to meet with people, build those relationships, have an understanding that we may not agree on everything. But I look at that 80 percentile of agreement of what’s good for the Central Valley. Can we parlay this into what’s going to be good maybe for northern California or another geographical area? I was just with the Republican caucus, ensuring that I have their support, which I do. I’ve got Jim Patterson’s full endorsement. With that, we can then transition into working with other persons across the aisle. I know for some that’s just absolutely heresy, but look, we have to work together for the good of the Central Valley, and hence it’s my strong suit.”

DG: With gas prices continuing to rise, what should be done to address that crisis?

MP: “There should be no question there should be an immediate rebate. Anybody that owns a vehicle should get a rebate immediately. What that number is, that’s why I need to be in the assembly to start negotiating and pressing for money back in the pockets regarding these crazy fuel prices at the pump. That’s No. 1. No. 2, I would suspect that in consultation that we would have to drop that state sales tax, even if it’s for six months, until we get through this. I’m hoping that this nonsense over in Russia and Ukraine will stop, prices will start to come down. But we need to bridge that immediately through a rebate program for every registered vehicle and then also the gas tax, even if it’s for a few short months, that should put a moratorium on.”

DG: Two of your opponents serve on the Fresno City Council: Esmeralda Soria and Mike Karbassi, both Democrats. There has been extreme contention between them lately with claims of corruption and Brown Act violations running throughout many on the council. Do you have any thoughts on their feud?

MP: “That is a Fresno City Council issue, and I’ll just leave it on their dais.”

DG: Is there anything else you would like to address to wrap up?

MP: “So basically the four pillars of my candidacy really revolve around these items: public safety, water, less taxes/less regulation and a more comprehensive approach to the homeless situation. That has just gotten out of control.”