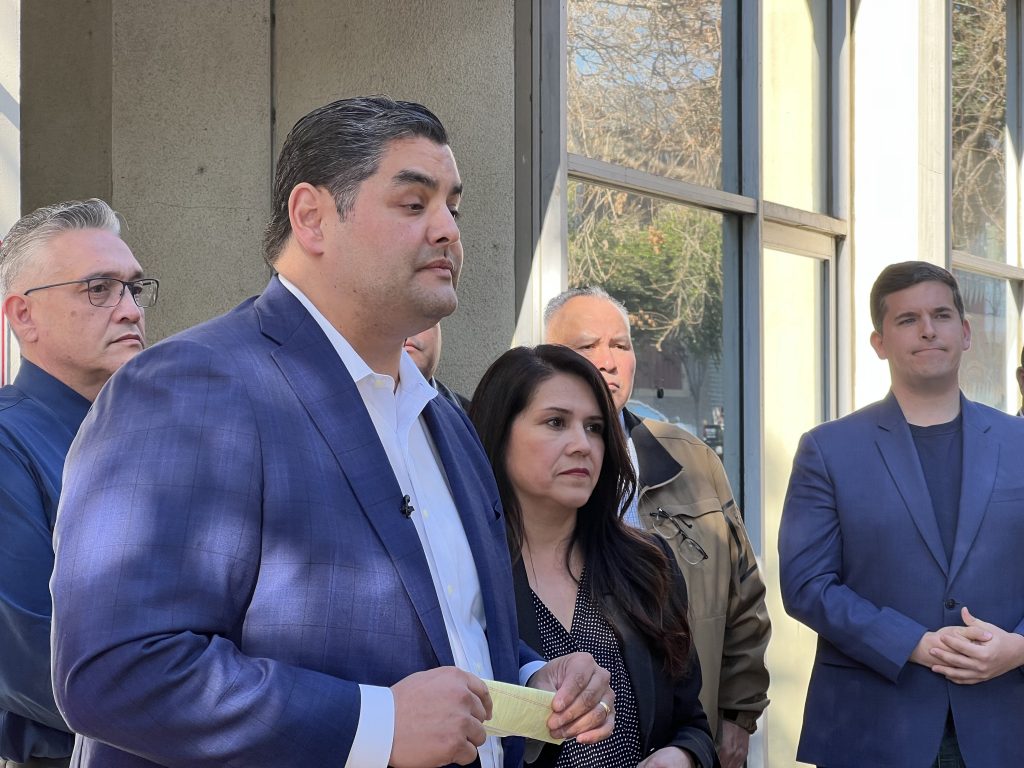 Mark Salazar, the Fresno Police Deputy Chief of Investigations, announced his candidacy Friday for Fresno County Sheriff. If elected, he would be Fresno County’s first-ever Latino Sheriff in the department’s history.

Salazar’s announcement comes one week after Sheriff Margaret Mims revealed that she will retire after her term finishes later this year.

Salazar, who made his announcement in front of the Fresno County Elections Office, said his goal as sheriff would be to change how the office fights crime.

“I’m running because I think the time is now to change how we fight crime in this county, so I’m going to bring my experience crime fighting to that focus as a sheriff,” Salazar said. “As sheriff, the plan is to bring technology, the plan is to focus on crime like never before, and then partner with our partners collaboratively with the Fresno Police Department and then the other departments as well, the DA’s office as well. My platform’s going to be crime. It’s going to be also engaging the community.”

A 25-year veteran of the Fresno Police Department, Salazar said one of his driving forces in law enforcement has been to ensure the safety of people no matter where they live.

Salazar is a Bakersfield native and a registered Democrat, which he says came from growing up with his grandfather who was involved with labor unions.

Salazar said he will continue to issue concealed weapons permits if elected sheriff as he supports Second Amendment rights.

“I believe in people having CCWs,” Salazar said. “When they need it, they should have it. The people that are holding those permits are not the ones creating tragedy in our communities.”

Salazar previously applied to be Fresno’s Police Chief but was ultimately passed over for Paco Balderrama.

He argued the need for a fresh set of eyes to oversee the Fresno County Jail and also committed to following state law in regards to not collaborating with U.S. Immigration and Customs Enforcement.

“In the Fresno Police Department, in the last year we’ve booked over 1,000 gang members. Over 900 have been released. The No. 1 reason was overcrowding. Of that 900, just under 500 have recommitted other crimes – violent crimes and property crimes,” Salazar said.

“There’s a crisis at the jail. I would bring a different perspective, a fresh set of eyes on the issue. And on the issue of ICE, I’m not here to grandstand on immigration issues. I’m going to follow the law, what the law says. I’m from the era of the Fresno Police Department when we do operations we don’t ask immigration status. I don’t know one ICE officer in my 25 year career.”