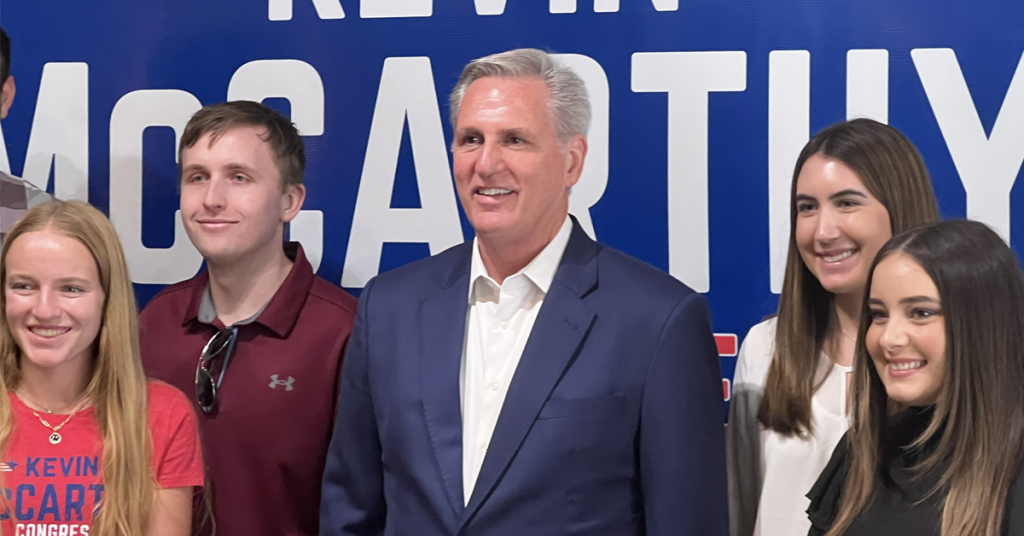 House GOP Leader Kevin McCarthy (R–Bakersfield) took another swing through the Fresno-Clovis area Friday, visiting campaign headquarters and staff in new territory that he hopes to represent if he is reelected in November.

Due to redistricting, the Bakersfield Republican will see his district run further north than it ever has.

With the new 20th Congressional district holding a Republican voter registration edge exceeding 20 percent, McCarthy handily won the primary with 58.7 percent of the vote and will face Democrat Marisa Wood in the general election.

After meeting with voters and attending a fundraiser earlier in the day, McCarthy met with local media at his Clovis campaign headquarters to discuss various national and local issues.

“I never did much with him in Congress because I always felt there was something just not right with him,” McCarthy said. “I watched and listened for people in the Valley how he had cheated them and nonprofits, and it was a real concern to me. What was really a concern to me too, after he had lost reelection, continued to play in politics and raise money online. I really wondered where that money went. Hopefully he gave that money back to the people that he cheated.”

Cox’s former opponent, Rep. David Valadao (R–Hanford), is locked into what appears to be one of the most competitive races in the nation as he faces Asm. Rudy Salas (D–Bakersfield).

McCarthy was confident in his party’s ability to retake the House in November, starting with the two local races.

“I think both of them – David’s going to get reelected, and John Duarte’s going to get elected. Small business owner, nursery owner that understands what it takes to run a company in California – the challenges, watching the country change before his eyes. Knowing the importance of water. Even when you look at the primary where California has the top two and everyone can vote, John Duarte came out on top above Adam Gray, when here’s a man that’s been in office for a long time but has been voting for a lot of these punishment bills going through,” McCarthy said.

“California was our very best state in Congress last election. We picked up four seats: Young Kim, David Valadao, Michelle Steel, Mike Garcia. Very competitive seats, but I think there are more seats in California we can win. We’re four seats away from the majority, but I believe we can win in Rhode Island, in Maine, Oregon, Nevada and Ohio and North Carolina and Florida as well. California’s going to be a good state for us.

“Just think of what California’s Democratic policies have done. The crime continued to rise. You’ve got inflation. For anybody in California, especially in the Central Valley, the No. 1 question that should be asked: Could you afford to give up one month’s salary. I believe they would say no they can’t, but that’s what’s been taken from them by the Democrats in causing inflation. One month’s salary is 8.3 percent. Inflation is higher than that. You’ve got gasoline that you can’t afford. You’ve got little challenges going on. All of that can change.”

A local policy McCarthy touched on was the decision from the California Air Resources Board this week to implement Gov. Gavin Newsom’s request and ban the sale of all gas-powered vehicles by 2035.

“I think that policy is bad and stupid. I think that policy only harms people from the standpoint that government is going to dictate what you can buy. Here we are with people with that like mind opinion that they know best and want to control all, they have now raised our pricing level. When the gasoline price topped $5 and they asked the president about that. He said that’s a good thing, now people would be forced to drive electric cars,” McCarthy said.

“When you’ve already lost one-month’s salary because of the Democratic policies, they’re now going to tell you you have to buy a new car, it’s more expensive, that you don’t have a choice. When we look in the Valley of what we have to do here, that we work with our land and others, is an electric truck really going to work when it comes to tilling farmland? Is it really going to work if that’s our only choice when we’re moving dirt or drilling for oil and natural gas or building a solar facility? Why did they take away options? Why did they take away choice?”