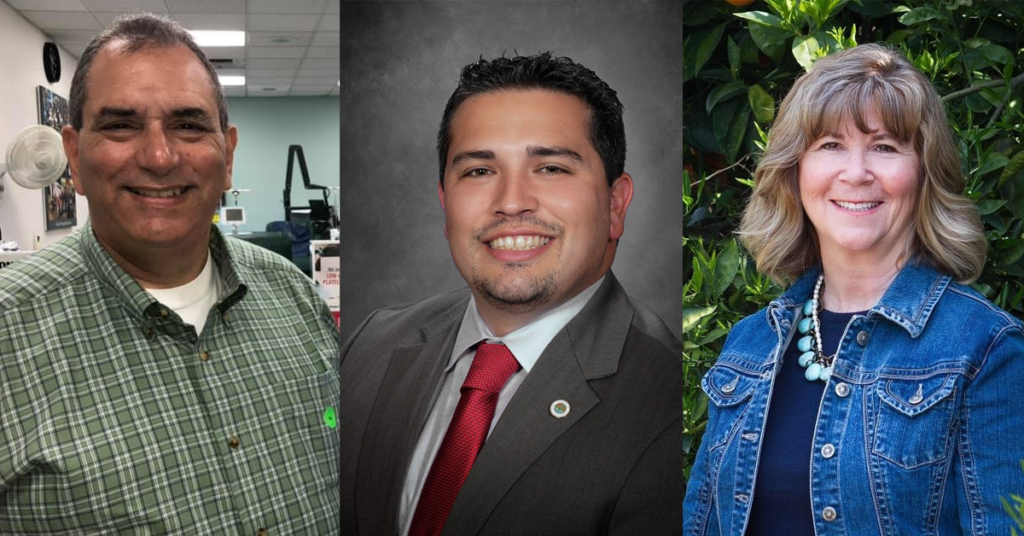 The Tulare County Board of Supervisors District 1 race is heating up. Incumbent Kuyler Crocker, who narrowly won the seat in 2016 and is serving his first term, faces two experienced opponents.

Former Exeter Mayor Robyn Stearns and retired Tulare County Sheriff’s Captain Larry Micari are looking to win the position, and they feel they have the path to make it happen.

Although the primary election is not until March 2020, the race figures to be close if it follows suit with the last election.

In 2016, Crocker won the election by 295 votes. He sees quite a few similarities with the two elections and feels he’s made good strides going into 2020.

Crocker said he engaged Tulare County in more advocacy efforts, including a fix for the Friant-Kern Canal, working with California Citrus Mutual, as well as other accomplishments.

They discussed water issues, homelessness and agriculture preservation among other topics, Crocker said.

Crocker has made an effort to have a more transparent board by instituting more evening meetings, holding meetings in unincorporated communities and ensuring all documents presented in meetings are collected and submitted when the agendas are published 72 hours before a meeting.

“That’s a change in culture as far as preparing a little bit more for our department to making sure that we’re doing that,” Crocker said. “I think it’s important for the public to have all the documentation, all of the materials that we as a board are going to see on a regular basis so that the public knows what we’re doing as well.”

Water quality issues are very prevalent in Tulare County, Crocker said. It’s an issue that can take several years to fix, but it’s something he’s working on solving.

His experience working for PG&E as an energy advisor helped him find the opportunity to push for a $28 million solar project for Tulare County. Crocker said the project will save the county around $1 million in electricity costs every year.

Crocker’s supporters include the Tulare County District Attorney Tim Ward, most of his colleagues, school board members and city council members from his district, he said.

Stearns has lived in the Valley her whole life and comes from a farming family. She was on the Exeter City Council for eight years, from and served as mayor for four years.

Stearns said she’s entering the race because she feels she can do a better job than Crocker and is excited to take on the challenge of running.

“I’m up for the challenge,” Stearns said. “I feel like I’m the better person for the job.”

Currently, Stearns is a self-employed realtor and has been to Sacramento several times to help lobby for home-owners rights.

While on Exeter City Council, she went to Washington D.C. twice to lobby Congress for additional funding for roads.

Stearns said she was a key contact for realtors with former California State Senator Andy Vidak, and currently works with and has a good relationship with State Assemblyman Devon Mathis.

“I really would like to get our water situation straightened out with the state of California,” Stearns said. “Work on our infrastructure, get more water storage built and not have all of our water shipped out to the ocean.”

Stearns also stressed her desire to help with the homeless situation in Visalia by working with the different volunteer organizations that address the issue.

Like Stearns, Micari has experience serving the people of Tulare County and wants to bring a change to the supervisor position.

Micari served for 33 years in law enforcement before retiring in 2017. He served in the Farmersville Police Department and was a captain with the Tulare County Sheriff’s Department.

Before deciding to run, he said he received calls from many people suggesting he run. He saw the support and felt he could be a positive change.

“I want to do this,” Micari said. “I want to help. I want to give back to my community.”

He didn’t want to comment on his opponents and doesn’t believe in running a negative campaign, but did say, “Two challengers to an incumbent should tell you something.”

Micari likened his career experience to customer service, saying he has nearly 23 years of experience navigating the county system and 33 years of dealing directly with public service providing for the people of Tulare County.

He said he was responsible to the sheriff for a budget that totalled $95 million. With that came plenty of experience working with the county to solve problems and navigate the system.

Miari said he doesn’t want to release any endorsements at this time, saying it is still early in the election process.

“I want to give back because I’ve had a good life,” Micari said. “My kids have a good life. We work for the taxpayer. I understand the importance of helping the constituents, understanding their needs and working with them. And I feel that coming in as a member of the board of supervisors, it would be a perfect opportunity to be able to give back as a thanks for everything that we have.”

The Tulare County Sheriff’s Office said Sheriff Mike Boudreaux has not endorsed a candidate and has no plans to do so at this point.