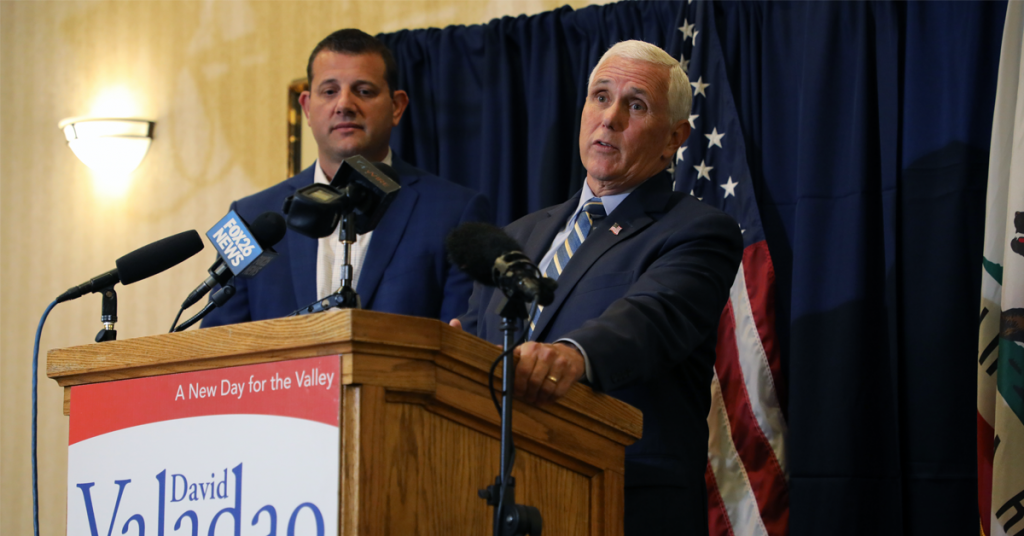 With more than $16 million on the line, Rep. David Valadao’s (R-Hanford) re-election bid got an added boost from former Vice President Mike Pence on Monday.

The former Vice President jetted into Fresno on Monday for a fundraiser hosted by business leaders Richard Spencer and John C. Harris and their wives.

After the event, Valadao and Pence spoke with local media about the state of the campaign, the economy, and the nation.

Of Valadao, Pence argued the Hanford dairyman-turned-lawmaker was “a man of integrity. A man that has stood strong for the conservative heartland values that literally are in the agricultural heartland of California.”

Pence also joked that Valadao had a leg-up on the former Veep: Valadao won his seat in Congress on the first attempt in 2012, unlike Pence who won it on his third.

“This country is in a lot of trouble,” Pence said. “In many respects, America is facing a crisis at home — in our economy, in a crime wave in our major cities, in the assault on our values and our liberties. That comes from the radical left.”

The former Vice President didn’t shy away from the stakes of the race, noting that a vote for Valadao would ensure Republican control of the lower chamber and the Speaker’s gavel for Valadao’s next door neighbor, House GOP Leader Kevin McCarthy (R–Bakersfield).

Valadao, for his part, noted that the differences between him and his Democratic rival couldn’t be starker. He argued that Salas, a five-term legislator who replaced Valadao in the California State Legislature, was a shill for Newsom.

“Newsom has been horrendous for us on water and you’ve got someone running against me who’s worked with him apparently over the last few years, has never stood up to him and asked him to step up and either one, stop the lawsuits against us on the federal level, that would help us on water or do something that would actually help us at the state level. And both those situations are dramatic,” the Hanford lawmaker said.

Pence has ties to the Valley area with his daughter, Charlotte, and son-in-law Henry Bond stationed at Naval Air Station Lemoore. Bond is a lieutenant in the U.S. Navy.

He noted that California’s punishing, top-in-the-nation gas prices have even crunched his own wallet.

“I took (my son-in-law’s) pickup truck down to the gas station this summer and filled up like a father-in-law is supposed to do it. Just broke the bank. California is paying some of the highest gasoline prices in the country and we need a majority on Capitol Hill to unleash American energy,” the former Vice President said.

Pence, who presided over the certification of the 2020 election before the siege of the U.S. Capitol of January 6, was asked about Valadao’s vote to impeach Trump. Valadao is one of two remaining members of the GOP who voted to impeach Trump and still seeking office after the primary season.

The other is Rep. Dan Newhouse (R–Wash.).

While reflecting on the terrible images of Jan. 6, Pence pivoted to the stakes of the election.

“Elections are about the future, we live in a time when inflation is at 40-year highs. We have gasoline prices that are through the roof, that are ravaging family budgets. We have a crime wave in many of our major cities, and frankly we have a crisis in immigration and at our border. I think the reason why David Valadao is going to be re-elected is because people of this district, and people all across America, want to focus on the challenges of today and not yesterday. They want to focus on the opportunities of tomorrow.

He noted that during the first two years of the Trump-Pence administration “David Valadao was there time after time and working every day to keep our promises to the American people right out of the gate, whether it was rolling back regulations at a record level or passing the largest tax cuts and tax reform in American energy, unleashing American energy, advancing government reform at every level, David Valadao never flinched from that.”