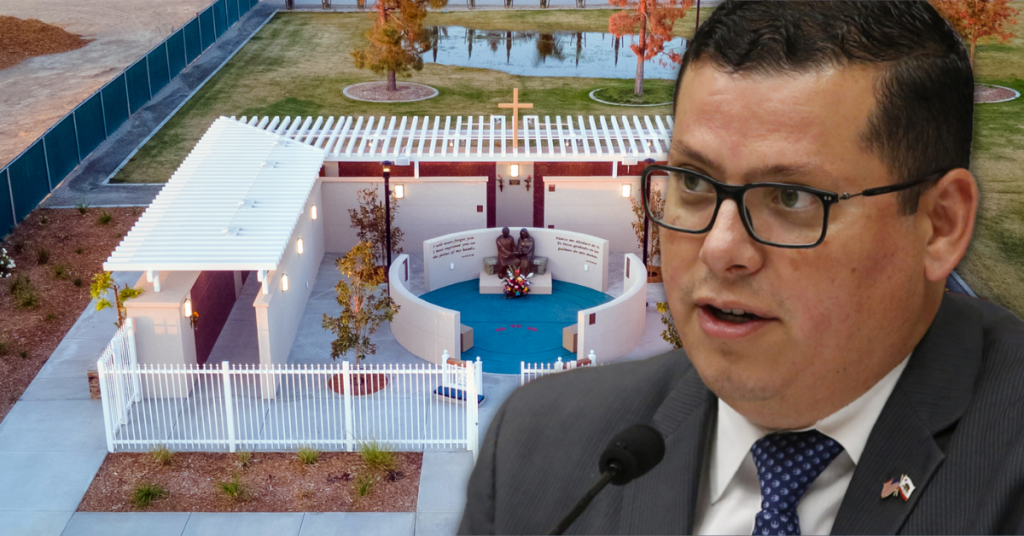 Asm. Rudy Salas (D–Bakersfield) could soon find himself in hot water with the Roman Catholic Church for his recently pronounced stance on abortion.

Salas, who is running for the 22nd Congressional District against incumbent Rep. David Valadao (R–Hanford) recently singled out abortion as a major campaign issue in the wake of the recent Supreme Court ruling that struck down Roe v. Wade.

In an interview with Politico earlier this month, the five-term Assemblyman banked on leveraging abortion as a wedge to separate Valadao and voters in the south Valley seat.

Valadao, a fellow Catholic, has long been an advocate of pro-life policies.

“People I’ve talked to door to door are upset,” Salas told Politico. “So I tell people like, ‘Hey, that’s a big difference’ … there’s a clear line between our two candidacies.”

Being pro-abortion, however, directly conflicts with Salas’ Roman Catholic faith.

Salas received his first Communion at Our Lady of Guadalupe Church, where he also attended school.

The church – which states that it is a pro-life community on its website – is notable for its Memorial for the Unborn garden.

“The Memorial of the Unborn is a place of consolation both for post-miscarriage and post-abortion healing, as well as a witness to the sacredness of all human life and the hope for reuniting with each tiny family member in Eternity,” the church’s website reads.

“As we begin to restore the culture of life, the Memorial Garden is a place where mothers, fathers, and other family members can come together to name their child and to permanently honor him or her with a memorial plaque.”

Pro-abortion stances have pushed politicians on the outs on the national stage.

Among the most famous of examples is House Speaker Nancy Pelosi (D–San Francisco).

In May, Rev. Salvatore J. Cordileone, the Roman Catholic Archbishop of San Francisco, announced that Pelosi would be denied Communion in his diocese because of her vocal support for abortion.

“After numerous attempts to speak with her to help her understand the grave evil she is perpetrating, the scandal she is causing, and the danger to her own soul she is risking, I have determined that the point has come in which I must make a public declaration that she is not to be admitted to Holy Communion unless and until she publicly repudiate her support for abortion ‘rights’ and confess and receive absolution for her cooperation in this evil in the sacrament of Penance,” Cordileone wrote in a letter to members of his diocese.

Following that announcement, Pelosi was also barred from Communion in the dioceses of Santa Rosa, California; Arlington, Virginia; and Tyler, Texas.

Locally, Salas has to answer to Bishop Joseph Brennan in the Diocese of Fresno, which spans much of the Central Valley – including Bakersfield.

“Bishop Brennan has the pastoral responsibility to teach and charitably correct anyone, especially of the Catholic faith, who may be in a sinful situation,” the Diocese of Fresno said in a statement.

“That is especially important when a Cathlic politician is promoting practices or legislation that are in contradiction to authentic Catholic teaching.

“Imposing any sanction on a parishioner of the diocese is a situation that is handled with care and diligence. If Bishop Brennan were to deny anyone the Holy Eucharist, there would be a process and a series of pastoral conversations between Bishop and the parishioner that would be held prior to the sanction. During this process and the conversations, Bishop Brennan would be trying to help the parishioner turn away from sin so that they can choose to receive the healing touch of the Holy Eucharist. Bishop Brennan is open to dialogue with local politicians if they are seeking further clarification.”

The Sun reached out to Salas’ campaign for clarification on how far long in pregnancy he supports abortion but did not get a response.