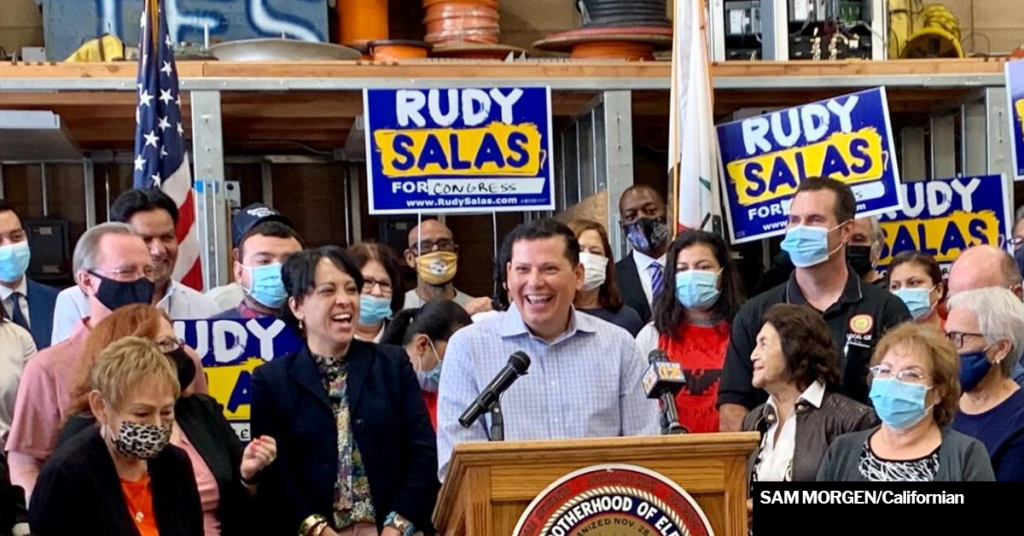 Standing at the hall of Bakersfield’s local chapter of the International Brotherhood of Electrical Workers, Asm. Rudy Salas (D–Bakersfield) made official what has been rumored for months.

He’s taking a challenge of Rep. David Valadao (R–Hanford) head-on, eschewing a run for his sixth and final term in the California State Assembly.

Out of the gate, Salas wasted little time jumping in to attack Valadao, decrying perceived failings by the four-term Congressman to represent the highly rural, and Hispanic district.

“One of the reasons why I’m running for this job is really for every person who wants their work recognized and respected,” he added.

Salas joins a crowded field of Democrats chomping at the bit to oust Valadao after the Hanford dairyman retook the seat in 2020 following the single term of Rep. TJ Cox (D–Fresno).

Most have struggled to gain sufficient traction to keep pace with Valadao’s prodigious fundraising.

Washington-based Democratic operatives hope that Salas, a business-friendly moderate Democrat whose legislative district has considerable overlap with Valadao’s Congressional district, can chart a path toward retaking a heavily Democratic seat.

Because of this, Salas has long been at the top of the recruitment list for the Democratic Congressional Campaign Committee, the campaign arm of House Democrats.

While Salas made his announcement to enter the race with considerable pomp and circumstance in Bakersfield, one of his fellow competitors sought to dampen the mood.

Parra, who launched her campaign mere weeks after Valadao won back his seat in the House in 2020, announced a slate of endorsements from Salas’ own colleagues in the California State Legislature.

All are fellow moderate, business-friendly Democrats akin to Salas.

“Nicole Parra is a daughter of the Central Valley — she is one of us. She is the dream of her immigrant grandparents, who pinched and scraped to provide education and opportunity. She is the experienced servant leader who has devoted her life to making life better for families like yours and mine. She will be the trail blazer who speaks the truth and stands up for us in Washington D.C.,” said Hurtado, who also represents portions of the 21st Congressional district.

Amid Salas’ announcement, at least one attendee didn’t get a chance to hear from the new-comer candidate.

A video released early Monday shows a Valley resident standing as part of the local media ahead of Salas’ remarks only to be booted from the union hall.

A Salas representative, as shown in the video, said the event was invitation only and not open to the public.

The Sun has reached out to the individual for comment.

This story be updated.