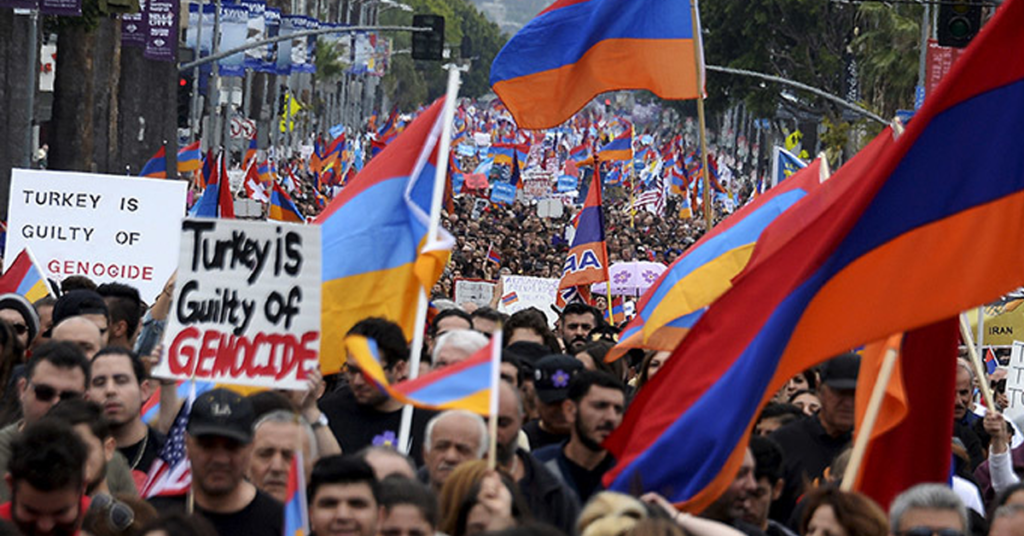 Oct. 29, 2019: Following a 22-year push, the House of Representatives voted in overwhelming and bipartisan fashion Tuesday to recognize the Armenian Genocide, spanning from 1915 to 1923 in Ottoman Turkey.

A final vote count closed at 405 members of Congress in support of House Resolution 296, 11 in opposition, with three representatives voting present.

The resolution was the first in a one-two punch in rebuke of Turkey, a longtime strategic American ally and member of the North Atlantic Treaty Organization, for its recent military operations in northern Syria threatening Kurdish allies.

Shortly after the Armenian Genocide resolution vote, the House approved the Protect Against Conflict by Turkey Act by a similarly wide 403-16 margin.

Both represent sizeable Armenian communities and have long been supportive of the legislation in its various iterations over the years.

The sizeable vote on the resolution followed an hour of debate that occurred Tuesday afternoon. Costa was among the Democrats to take to the floor and voice his support.

Beyond Costa, the floor debate featured a cavalcade of California members speaking in support of the bill, including Speaker Nancy Pelosi (D–San Francisco) herself.

No speakers spoke in opposition to the recognition resolution during floor debate.

Before debate and the vote, Kim Kardashian, arguably the most well-known Armenian American worldwide, lent her support for House Resolution 296 in a tweet and Instagram story.

Today, the House of Representatives is voting on H.RES. 296 which would recognize the #ArmenianGenocide. This is personal for me, and millions of Armenians who descended from genocide survivors. Call Congress and tell them it’s time to act! https://t.co/SymQZNYPg1

Advocates for the Armenian-American community celebrated the historic moment from the House floor.

“The passage of H.Res. 296 by the House of Representatives reflects the best of America. It honors a proud chapter in U.S. history of humanitarian intervention. It recalls the extraordinary contributions of America’s front-line diplomats, philanthropic leaders and relief workers in helping save a people from annihilation,” said Bryan Ardouny, Armenian Assembly of America Executive Director.

“The purpose of this resolution is crystal clear. It formally acknowledges the Armenian Genocide. It condemns genocide denial in any form. It encourages human rights education to help prevent future genocides.”

“The ANCA welcomes the U.S. House of Representatives vote overriding the longest-lasting foreign veto in American history – Ankara’s gag-rule against honest American remembrance of the Armenian Genocide,” ANCA executive director Aram Hamparian said. “We must now move forcefully toward a truthful, just and comprehensive resolution of Turkey’s crime against humanity that killed over 1.5 million innocent Armenians.”

Former Rep. David Valadao (R–Hanford), a long-time sponsor of the language of the resolution during his tenure in the House, similarly praised the wide approval of genocide recognition.

“During my time in Congress, I introduced several resolutions calling for the House of Representatives to formally recognize the Ottoman Empire’s engagement in the systematic and organized deportation and extermination of over two million men, women, children from Armenia,” Valadao said in a statement.

“As a result, Armenians throughout the United States have been steadfast in their efforts to ensure the memory of those lost never fades. I applaud the House of Representatives in recognizing and remembering the millions of lives lost or forever changed by these tragic events.”

Among the few to vote present on the resolution was controversial Rep. Ilhan Omar (D–Minn.). Despite the vast historical record in the United States of Armenian Genocide history, Omar suggested in a post-vote statement that recognizing the Armenian Genocide was not “based on academic consensus.”

She also argued that she declined to vote to affirm the Armenian Genocide because it did not include “both the heinous genocides of the 20th century, along with earlier mass slaughters like the transatlantic slave trade and Native American genocide.”

Despite her bona fides among progressives, Omar was roundly criticized on Twitter shortly after her dissenting vote and lackluster explanation.

In an attempt to downplay legislation it had long prevented with its expansive lobbying presence through political and official channels, the Turkish Ministry of Foreign Affairs referred to the legislation “a meaningless political step” in a statement issued after the House’s overwhelming approval of House Resolution 296.

Oct. 28, 2019: The resolution to recognize the Armenian Genocide is set for a vote on the House of Representatives on Tuesday after the House Rules Committee adopted a rule governing floor debate on the bill late Monday.

During debate, House Foreign Affairs committee member Rep. Chris Smith (R–N.J.) gave an impassioned breakdown of the history of the legislation dating back to the last-second nixing of the bill’s consideration on the House floor in 2000.

“When I had the hearing in 2000, the Ambassador from Turkey – because I had both sides at the table, the Armenians and the Turks – he threatened us with Incirlik,” Smith said, referring to threatening the American presence on Turkey’s largest air base. “Frankly, with a friend like that in NATO, who needs enemies?”

Debate on the bill will be limited to one hour, equally divided between both parties, led by House Foreign Affairs chair Eliot Engel (D-N.Y.) and ranking member Michael McCaul (R–Texas).

The bill is also closed from any amendments being offered on the floor.

Following the adoption of the rule on the bill, advocates for Armenian Genocide recognition were quick to celebrate another step forward.

“Today’s adoption of the rule for H.Res. 296 sets the stage for a historic vote on the House floor,” Bryan Ardouny, executive director of the Armenian Assembly of America, said. “As Chairman McGovern highlighted, if dark chapters in our history are not acknowledged they’re doomed to be repeated.”

House Majority Leader Steny Hoyer (D–Md.) announced late Monday that the bill would be placed on the floor for debate and a vote on Tuesday.

Also up for vote Tuesday is a bill, sponsored by Engel and co-sponsored by McCaul, to impose sanctions on Turkey for its intervention in northern Syria known as the Protect Against Conflict by Turkey (PACT) Act.

Oct. 27, 2019: A resolution to recognize the Armenian Genocide of 1915 may soon see a vote by the full House of Representatives, owing to a rebuke by Capitol Hill of Turkey’s incursion into Syria.

House Resolution 296, sponsored by House Intelligence Committee chair Adam Schiff (D–Burbank), is set to be taken up by the House Rules Committee on Monday afternoon in anticipation of an eventual floor vote before the full House.

“[It’s] the first time that the House of Representatives has unequivocally stated the facts of what happened in Armenia and called it a genocide,” Rules Committee chair Jim McGovern (D–Mass.) told NPR’s All Things Considered. “You know, for a long time, various administrations have used euphemisms to describe what happened in Armenia. I mean, they call it a mass atrocity or something like that. But this calls it what it is. It is a genocide, and it is the right thing for us to do.”

The Armenian Genocide resolution has a long history in both the House and Senate. The exact legislative language has been offered up by a variety of members of Congress for nearly 20 years, including by two Valley Republicans – Reps. George Radanovich (R–Mariposa) and David Valadao (R–Hanford).

Some versions have seen moderate success circulating the committee process – narrowly passing out of the House Foreign Affairs Committee in 2007 and 2010. However, neither of those pushes managed to reach the House floor.

The closest the resolution ever managed was 2000, when Radanovich carried the legislation. The resolution was scheduled for a floor vote, but ultimately nixed by Speaker Dennis Hastert (R–Ill.) following conversations with President Bill Clinton and his administration over concerns of upsetting the American alliance with Turkey.

In 2009, two years after leaving the House, Hastert would sign on to lobby on behalf of the Republic of Turkey.

As of Sunday, the current Armenian Genocide resolution had 117 co-sponsors, with a vast majority being Democrats.

However, one co-sponsor stands out among the rest: Schiff’s counterpart on the Intelligence committee and arch-rival, Rep. Devin Nunes (R–Tulare).

Despite the enmity between the pair, Nunes and Schiff both represent districts with sizeable Armenian populations concentrated in Fresno and Glendale, respectively.