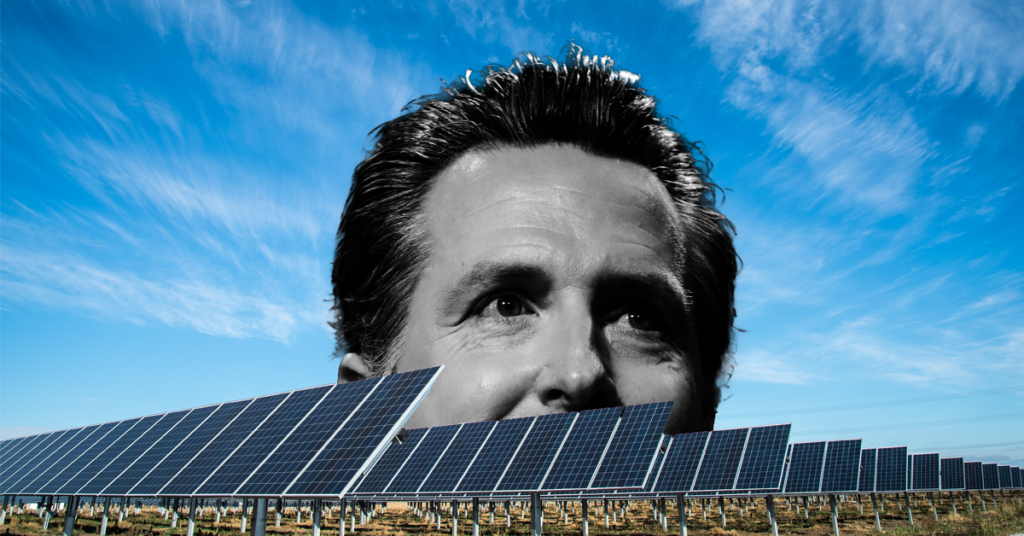 Kings County Supervisor Joe Neves guided his pickup to a stop next to a long line of chain-link fencing. On one side of a gravel road stood row after row of glinting solar panels. The automated mirrors pivot and turn, following the sun in its daily path across the Central Valley sky.

Neves, a big man with a wispy Santa Claus beard, was showing off the county’s newest mega solar power project, still under construction on 1,600 acres. A state-of-the-art facility, it includes powerful batteries to store and deliver power after the sun sets.

This solar plant in King County is one of the scores of new renewable energy puzzle pieces across the state considered vital to California’s transition to cleaner electricity and its pursuit of climate change solutions.

Rural California counties like Kings — with lots of land, sunshine and wind — are the focal point for many of these projects. Now they are at the epicenter of a statewide controversy, too.

Last month, Gov. Gavin Newsom pressured lawmakers to approve an energy plan that aimed to expedite and streamline construction of new clean energy facilities. Included is a controversial clause that lets developers bypass local permitting and instead turn to the California Energy Commission for fast-track approval.

The new strategy is an end run around local authorities who sometimes balk at allowing wind and solar facilities in their own backyards.

But if Newsom sees small, rural counties as impediments, Kings County begs to differ. Neves and other local officials have been busily opening up their county to solar projects for more than a dozen years.

Far from scoffing at the idea of renewable energy, some Kings County farmers have embraced solar generation as a profitable problem solver – they get paid for the use of their barren land and can transfer the water to higher-value crops.

Whatever the intent of the new law, Kings County doesn’t think it’s the problem: Most projects in the county’s 40,000-acre solar zone receive approval in less than six months — in some cases in six weeks, county officials say.

“We are not unsophisticated, we know what we are doing,” Neves said. “We planned for this. We can see the future.”

Across the state, local officials were miffed at state officials for being excluded from the discussion as the law was being crafted behind closed doors in late June, then piqued again after it passed the Legislature and was signed by Newsom, meaning they no longer had the final say-so for projects in their counties.

“Local governments are viewed as an impediment, another layer you have to go through to get your project across the finish line. But we permit these facilities all the time. It’s one of the core functions we perform as local government,” said John Kennedy, a lobbyist for Rural County Representatives of California, which advocates for 39 small counties.

While a few projects have been stalled by local officials, some energy developers said Newsom’s initiative is a solution in search of a problem.

“What is this proposal solving for?” said Alex Jackson, director of California state affairs for American Clean Power, an association of renewable energy companies.

“In general we work really well with local government. We have invested a lot in those relationships. We prefer to work with them rather than strong-arm them. Overall we don’t see this as unlocking the path to accelerating clean energy.”

The idea that opposition to renewables follows a political, red-blue divide doesn’t play out across the state. Conservative Kern and Riverside counties are “built-out” Nancy Rader, executive director of the California Wind Energy Association, said. Kern, for a century the state’s provider of fossil fuels, has extensive renewable energy projects.

What Kern County officials and others balk at, though, is a statewide law that exempts solar projects from property taxes, denying local governments operational cash. Neves, from Kings County, estimates the solar tax break costs his region some $3 million a year. The law is set to sunset in 2025 but a similar measure is making its way through the Legislature. (Wind projects are not offered similar tax breaks.)

But rather than providing an advantage for solar projects, the tax exemption establishes a disincentive for local jurisdictions to approve the projects, said