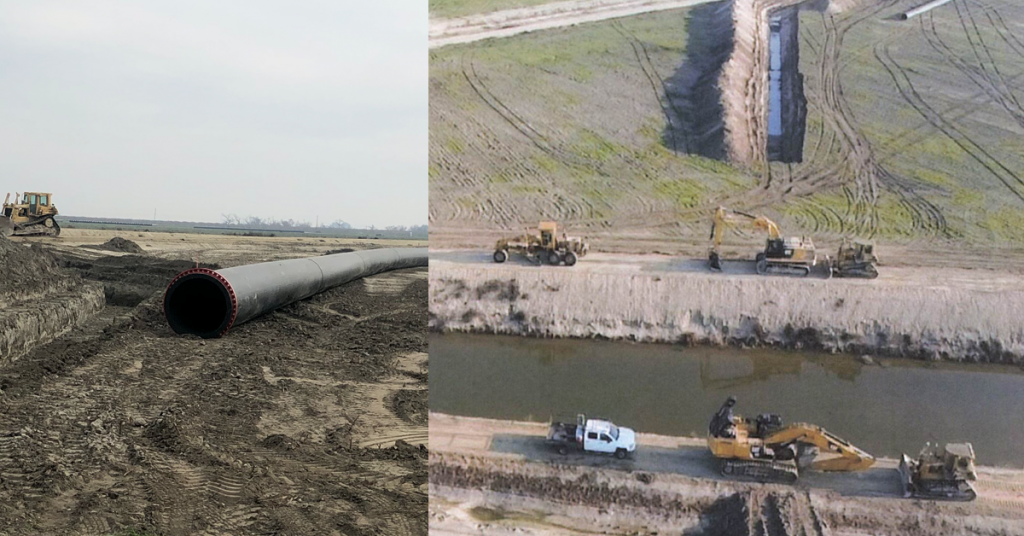 A push by one of Kings County’s largest farming outfits and water players to resume construction on a mysterious water pipeline will continue to face a literal blockade of heavy equipment, including some provided by one of its top competitors.

At the center of the controversy, a physical barrier stopping Sandridge Partners, the diversified farming and water giant owned by Santa Clara County native John Vidovich, from constructing a water pipeline in southern Kings County.

Shortly thereafter, it placed heavy equipment, including some owned by the J.G. Boswell Company (a heated rival of Sandridge).

Sandridge responded to the initial suit by filing a cross-complaint against Tulare Lake Canal Company. Last week, it also filed for a temporary restraining order hoping to compel Tulare Lake Canal and Boswell to remove its equipment from a canal berm.

Per a report from SJV Water, Tulare Lake Canal and Chrissakis pressed Sandridge to demonstrate irreparable harm if it was unable to proceed with construction uninhibited by heavy equipment blocking its path:

In arguing that Sandridge didn’t meet the urgency requirement for its restraining order request, Tulare Lake Canal Company attorney Leonard Herr asked “Where is the water going? When will it be used? Who is going to use it? Without that information, your honor, I don’t think this case is entitled to the emergency that (Sandridge is) claiming.”

Sandridge said it needs to complete the pipeline and start moving water quickly to “pre irrigate thousands of acres.” It did not, however, provide any contracts or cropping information as to the need for the pre irrigation, which Judge Chrissakes noted in her denial of the restraining order.

The two sides are set to return to Kings County Superior Court on Feb. 25 for an evidentiary hearing.