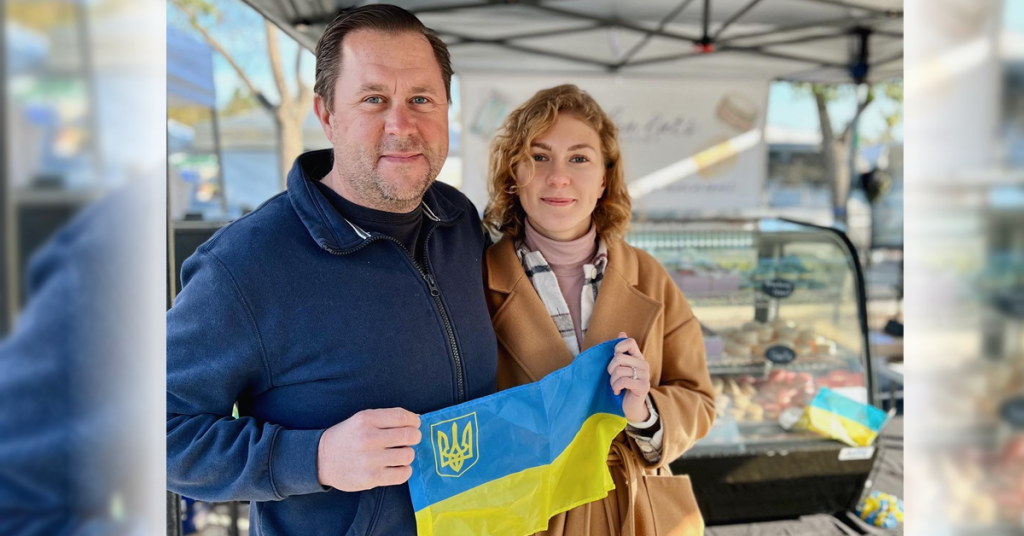 More than 6,000 miles away from the fighting, a Ukrainian immigrant living in Hanford is dealing with the pain every day that her home is under attack.

Yuliya LaMattino moved to the United States in 2019 and lives in Hanford, where she runs a home bakery business named Dobra Eats that specializes in handcrafted macarons, which she sells at the Visalia Farmers Market on Saturday mornings.

Since the fighting started last week, LaMattino has started every morning worried for her family and friends back home in Ukraine.

“Every morning starts with sending about 15 messages about “how are you” or “are you OK” to people that I care about,” LaMattino said. “And then every couple of days whenever I hear about the bombing of a certain city, I go, “Oh my God I know somebody from there,” and I send them a message.”

LaMattino, 24, left Ukraine at the age of 17 to attend university in Poland. She moved back to Ukraine for half a year after she finished her school and worked in Kyiv.

Her parents, brother and grandparents still live in her hometown of Khmelnytskyi, located in the western part of the country, and are relatively safe for the time being. They live near a military base, and the Russian army has not advanced on the city yet.

“My grandparents have seen rockets and missiles hitting the airport and that military base,” LaMattino said. “They can hear it all. The air raid sirens go off three, four times a day where they live, so they get to spend a good part of the day in the basement.”

Khmelnytskyi has become a new home for many refugees from Kyiv and east Ukraine, and LaMattino said her family is helping to provide food, clothes and shelter to those in need.

LaMattino and her husband Brandon were visiting her family in Ukraine for a few weeks in January, which included five days spent in Kyiv. At the time, Ukrainians were not expecting this to happen soon after celebrating Christmas and ringing in the New Year.

As has been reported, the Ukrainian government has handed out guns and ammunition to its citizens that are willing to take up arms against the Russian military.

LaMattino has friends in Kyiv who have joined in the fight, and it is “nerve-wracking” for her as she worries about what each new day will bring.

“I have thought so many times I wish I could be there with them and I wish I could help them somehow, because I feel just so helpless over here. And then I realized that the best thing I can do is stay here and just try to help them as much as I can from here,” LaMattino said.

Despite the turmoil and the constant worrying, LaMattino is confident that the Ukrainian people will continue to resist.

What can people who live in the Central Valley do to help?

LaMattino urged everyone to speak about the crisis, keep up to date and spread information about what the current situation is in Ukraine.

She also urged people to call their representatives in government to say that they stand with Ukraine.

“I just hope that the war ends very very quickly, and people in Ukraine are able to get their country back,” LaMattino said.