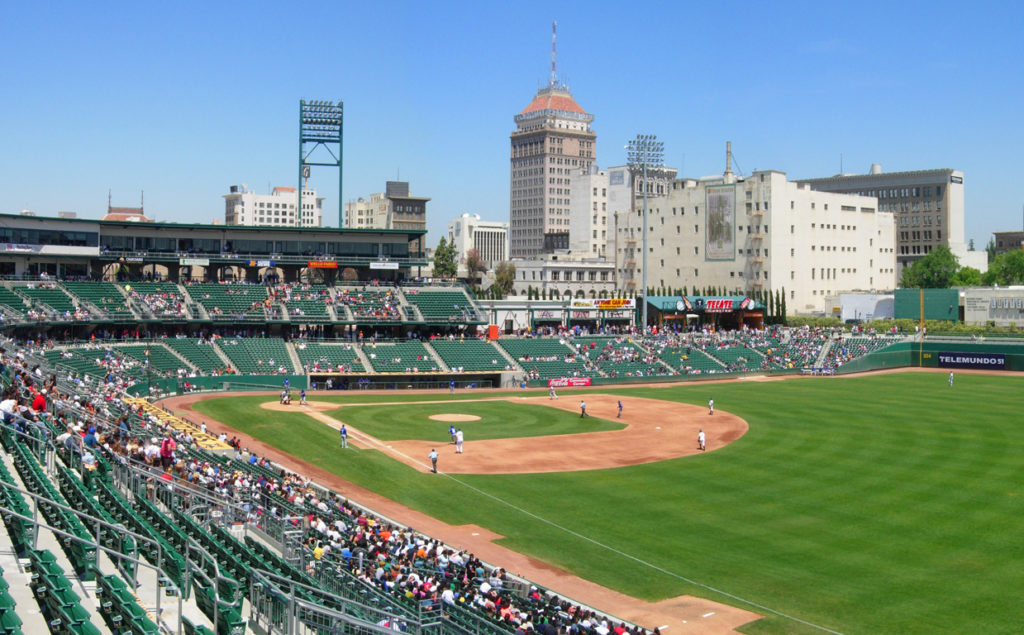 As Spring Training kicks off, signaling the start of baseball season, the Fresno Grizzlies welcomed the Colorado Rockies to town on Wednesday.

The Grizzlies signed a 10-year agreement with the Rockies to be the Major League club’s Low-A affiliate last December.

Formerly the Triple-A team for the Washington Nationals, the Grizzlies were effectively forced to accept a transition to the Single-A California League as part of Major League Baseball’s complete overhaul of the Minor League Baseball player development system.

During a press conference at Chukchansi Park, team president Derek Franks said the Grizzlies are committed to this partnership with the Rockies and are not focused on any possible transition back to the Triple-A level that could arise over the following decade.

“We want to let our community know that baseball in Fresno is strong, and our 10-year partnership with the Rockies really sets us up to come out of a very long off-year that nobody anticipated, setup for the future to reopen this ballpark – Chukchansi Park, to our fans and hit the ground running with a new Major League affiliate,” Franks said.

Zach Wilson, the Colorado Rockies Assistant General Manager for Player Development, said this new relationship with the Grizzlies is more than just a typical affiliation, but a true partnership in which he expects the players to connect with the community.

“Part of our culture here that we’ve worked really really hard at in the minor leagues is making sure that our players understand the impact that they can have not just on the field through performance and doing the right thing and playing hard and being exciting ball players, but through what they’re able to do out in the community,” Wilson said.

“And not only is that an expectation of ours, but it’s a desire of our players because of the culture that we have formed here over the last several years. So you’re going to see our players out and about. We’ve done everything from autograph signings, to hospital visits, to school visits – among many other things – and that’s an important part of who we are. So our desire, our goal, is to bring fantastic baseball to Fresno, and also to bring true impact and involvement in the Fresno community.”

Wilson and the Rockies are excited to have a city the size of Fresno be the home for their Low-A team, which will be made up of young players just starting their professional careers.

Wilson sees Fresno as a special case in the low Minor League world, given the city’s size and the 11,000-seat stadium.

“To go into a city like Fresno and be able to establish themselves in a bigger city, that’s been different than how it generally has been in the past,” Wilson said. “It’s usually smaller cities that have been involved in Low-A, so to be able to have them thrust into a bigger community I think is going to be great for them.”

Wilson added, “The frosting on the cake is this beautiful gem landmark of a stadium that you have there. And when you fill that with the great fans of Fresno, we couldn’t think of a greater development environment for our players to start their career in.”

Gone are the days of having top prospects like Buster Posey, Madison Bumgarner and Carlos Correa who are on the cusp of breaking into the big leagues.

“Obviously the experience levels are going to be very different,” Wilson said. “That’s going to be the most glaring difference between Triple-A baseball and Low-A baseball. But I think the excitement of the players isn’t going to change.”

Like Wilson said, the Grizzlies will have young prospects getting their first taste of professional baseball. While those players will be years away from the Majors, some of the Grizzlies will be top draft picks fresh out of high school and college that have the same potential as players like Posey.

One of those prospects is 19-year-old outfielder Zac Veen, the No. 9 overall selection in last year’s draft.

Wilson would not guarantee that Veen would spend the season in Fresno, but he said there is a good chance highly-rated prospect plays for the Grizzlies in 2021.

“I think [Veen] showed a lot in this past fall instructional league that shows that he’s likely ready to come to Fresno and begin at a full season,” Wilson said. “Not guaranteeing it, but I think it’s a reasonable expectation to think that you can see Zac Veen playing baseball in Fresno.”

In addition to prospects, Wilson said the Grizzlies will be in play to host Major Leaguers rehabbing from injury.

“There’s definitely a possibility that somebody could come there and rehab,” Wilson said. “And let’s face it, you’ve got the Triple-A facility that’s there, and it makes sense to send a Major league Player there for a bunch of different reasons. Certainly that is a possibility as we move forward, no question about it.”