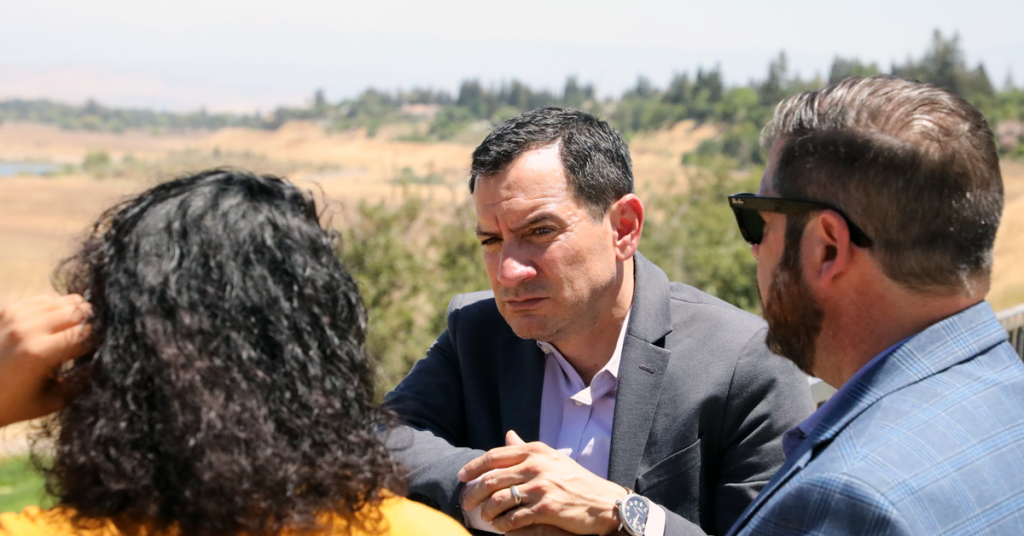 It’s not often that the legislative leaders who often dominate policy decisions in Sacramento make their way to the San Joaquin Valley to see first-hand their impact – either real or potential.

For Newsom, it’s the first time he’s been met with any form of resistance from the state’s legislative leaders on pathways for spending money, as California’s budget season largely receded from the high drama, IOU-laden sagas of the Schwarzenegger era.

As for San Joaquin River, its parkway has become the hub of a new-found tug of war between residents and allies who have long-served on the board and advocated for the parkway’s expansion via local control backed by state funding and social justice advocates who have sought to shift more responsibility toward Sacramento.

Rendon, in pushing for a critical $15 million earmark to fund local ambitions of a useful public waterway, joined the tug of war on Tuesday.

Alternatively pressing for consideration of his earmark and plugging Arambula’s legislative achievements, Rendon compared the lack of investment between his land-locked Los Angeles County district and the oft-forgotten Central Valley.

“It’s always been my focus to see what people need on the ground level and see how that fits into the big picture,” the Speaker said. “People in my district and people right here have not been the big beneficiaries of environmental projects in the past.”

Arambula presses Newsom to rethink the Conservancy Board

Arambula proposed Assembly Bill 559, which seeks to change a 2000 law authored by then State Sen. Jim Costa (D–Fresno) over how the San Joaquin River Conservancy board is comprised.

Currently, the Conservancy – a 29-year-old state agency tasked with developing the river parkway – is made up of appointees from the Mayor of Fresno, Mayor of Madera, one member of the Fresno County Board of Supervisors, one member of the Madera County Board of Supervisors, Executive Director of the Wildlife Conservation Board, Secretary of Natural Resources, Director of California Fish and Game, Director of State Parks and Recreation, Director of Finance, and Executive Officer of the State Lands Commission, and the chairs of the Fresno Metropolitan Flood Control District and Madera Irrigation District.

Three other seats are occupied by a resident of the City of Fresno, and two seats each alternatively named by the Madera or Fresno County Board of Supervisors derived from river-adjacent property owners or from recommendations by environmental organizations.

Arambula’s bill seeks to scrap the alternating seats for property owners and environmental organizations and require County’s consider from a list supplied by “nonprofit organizations that have a presence within the county and support outdoor recreation, conservation, environmental justice, or social justice issues.”

It also creates a seat for a member of a local tribal organization, and a non-elected official member to “represent statewide interests.”

“What is the city or Central Valley that they want to see 20 or 30 years from now?” she asked.

She said the bill allowed for diverse perspectives and generating more inclusive decision-making, stating a need for tribal voices and those who do not own a home.

“For folks from local tribal organizations who have a natural connection to the land to those who may not be land owners,” Celedon said. “Land ownership, historically, has been a racist practice.”

“How do we remove that as a requirement to enable more voices to join the table?”

The Fresno doctor-turned-legislator has attempted to shake-up the status quo on the river. In 2018, he proposed converting the San Joaquin River Parkway into a state park.

Then-Gov. Jerry Brown vetoed it, saying that the bill didn’t achieve the end goal: adding land within the parkway for public use.

As for Rendon’s push to include the $15 million earmark, he noted that he has at least twice raised it with Newsom in hopes of preserving it when a finalized budget reaches his desk.

In his view, the push to fund parkway operations arrives suspiciously as Gov. Gavin Newsom faces the threat of a recall.

“It is not lost on me that this funding comes at a price,” Karbassi said in a statement. “The Governor, Speaker, and Assemblyman Arambula are eroding local control that has allowed the City of Fresno, County of Fresno, City of Madera, and County of Madera to make decisions critical to their residents being able to safely enjoy the immense asset that is the San
Joaquin River.”

“The Governor is now leveraging the San Joaquin River as his own personal recall life raft—attempting to win over Central Valley residents with funds, while reducing their control over their own community asset,” he added.

Costa, for his part, struck a more conciliatory note regarding the one-two punch from Arambula and Rendon.

“For years, supporters of the San Joaquin River Parkway have had a vision of what a 22-mile parkway would mean for expanded recreational opportunities in the valley,” Costa said in a statement. “It’s important to assess the progress of the last 30 years and consider what meaningful change we can create in the next decade to make this an inclusive river parkway for everyone.”

“Assemblymember Arambula’s bill, along with additional state funding, can be helpful as part of a larger effort to do just that. As a strong advocate and author of the legislation that created this conservancy, I believe it’s critical that we work together – and I have suggested coordinating a workshop to bring all parties to the table – to plan how we build for a better future.”

The Sun contacted Sen. Andreas Borgeas (R–Fresno), another vocal advocate of the San Joaquin River Parkway, for comment. His office did not issue comment before publication.