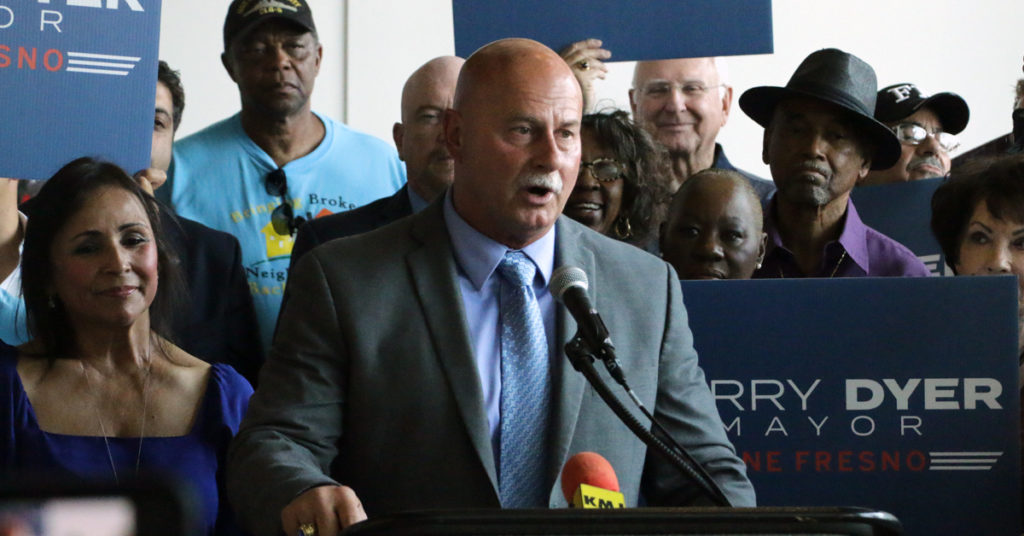 Hall, a 40-year department veteran, had been a deputy police chief for the last three years. For many years he was perhaps best known to Fresnans as the department’s top traffic cop.

Jerry Dyer officially retires in mid-October. However, Brand and Quan left no doubt that the transition to a new “top cop” begins immediately.

Brand is not running for reelection in 2020. Dyer is already a hard-charging candidate to succeed him. Thus, the pressure on Dyer from certain quarters to distance himself from the chief’s office has been intense.

Dyer was the assistant police chief when he succeeded Ed Winchester as police chief on Aug. 1, 2001. Alan Autry had been sworn in as Fresno’s second “strong” mayor (Jim Patterson was the first) in January 2001. Dyer would serve nearly eight years for Autry, a full eight years for Mayor Ashley Swearengin and what will be two years and nearly 10 months for Brand.

Eighteen years of stability at the top of the police department in California’s fifth largest city is a remarkable feat.

1.) “Process” was just about the most popular word at the event. The Brand Administration went through an elaborate process – part external, part internal – to find Dyer’s successor. In the end, city officials said, the job went to someone who hadn’t even applied and has no intention of matching Dyer’s 18 years at the helm.

I sensed from reporter questions that some people felt the process had somehow been betrayed or was flawed. But in light of all of the above, how could Dyer’s successor have been someone other than a member of the department with a limited time frame in the job?

The new mayor will want his/her own police chief. Potential candidates for the police chief’s job in 2019 realize this. Such a reality almost certainly impacted the candidate pool this time around.

Andy Hall is a superb choice. Mayor Brand and City Manager Quan are to be commended.

Andy Hall also is the practical choice. I wish him the best.

2.) Brand, Quan and Dyer had nice things to say about Hall. But it was Hall who carried the day with his brief and heartfelt remarks. Here are a few of Hall’s comments:

“If someone had told me when I was 18 years old and applied for this job as police cadet – honestly, before I started shaving – that I was going to end up as the chief of police of the fifth largest city in California I would have laughed. But here I am.

“I would like to start by thanking the Mayor and the City Manager. Their support has been unbelievable. I can’t thank you enough. I would also like to thank Tim Orman, the Mayor’s chief of staff. He’s really been a resource for me since he came to the city and since I’ve been a deputy chief. I really value him. Most of all, I would like to thank Chief Jerry Dyer for his leadership throughout my career. He’s truly been there for me as a friend. He’s an amazing chief.”

Hall amended his “most of all” comment, saying such praise was really meant for Jeanne, his wife of 35 years.

“Her support and patience is truly my rock. She has always stood behind me, in the good times and the bad, and she’s always been my friend. I can only hope to be the person she is.

“I want to take this opportunity to thank the community members. I sat last night and read every comment that the community made in the survey – every one. I’ve taken them all to heart. I want to thank you for everything that you’ve done in this process….

“As I stand here today, I am humbled. I love this city. I’ve spent 40 years of my life (in the Police Department). I can’t think of a better place to be. I believe this is one of the finest police departments in America. I truly do. I’m proud to stand behind the men and women, both sworn and non-sworn, who make this department a model agency. Again, I’ve devoted 40 years to this community, and I have seen first hand the countless hours and sacrifices our folks make every day to keep our community safe, including some who have given their lives and sacrificed everything.

“This department is made up of caring individuals. I wish everyone could come and meet our employees. They’re not perfect. That’s by God’s design. And I will certainly stumble along the path, as will as the men and women of this department. But I will promise you that we will be held accountable for our actions. Anything less than that would erode the trust in me, the trust that the Mayor and the City Manager have given me, and this great department. Community trust is vital to this profession and is the cornerstone of law enforcement….

“We have been so blessed to have Chief Dyer as our leader over the last 18 years. He is an amazing leader. He is a once in a generation type person. And I honestly believe this. And I can only hope to be half the leader he is…. I know he will always be there for me and is only a phone call away.

“I would also like to ask the community to come together, to stop taking every opportunity break each other down. Whether it’s for political or personal gain, it really has to stop. We need to come together as a city and be the city that we want to be. We should support each other, in the good times and in the tough times. That’s what makes a great city, and I hope we can do that.

“With that said, I so excited about the future of our department and I’m so excited to be a part of it. And I hope that everyone in the community will work with me to make our community better. Thank you.”

UPDATE (Aug. 22, 11:00 p.m.): News surrounding the selection of Fresno’s police chief has shifted from selection of a permanent replacement for outgoing Chief Jerry Dyer and toward that of an interim police chief.

The move comes following months of surveying, community meetings, and a nationwide search to find a successor for the 18-year chief.

Thursday night, KFSN first reported that Deputy Chief Andy Hall would be named to take the helm of the department.

Fresno City Councilman Miguel Arias said that Hall would take over on an interim basis.

City Hall sources told The Sun that Hall’s selection as an interim police chief was a possibility outside of selecting one of the five finalists for the full-time, permanent position.

The move would allow the next Mayor, quite possibly Dyer himself, to make the selection in 2021.

Brand and Quan will hold a news conference at 10 a.m. at Fresno City Hall to announce the selection.

Fresno Police Chief Jerry Dyer was scheduled to retire in mid-October. He is currently running for Mayor of Fresno to replace Brand, who opted against running for re-election in May.

Brand initiated the process to replace Dyer with a public survey, followed by community meetings in each City Council district to solicit comments on the needs of each region.