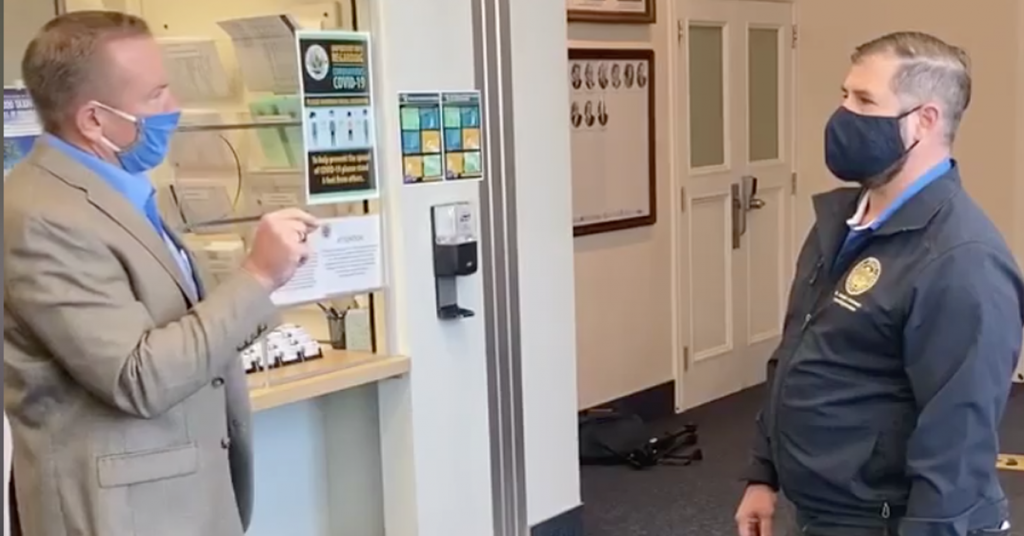 Instead, an attempted ambush turned into Arambula largely on the wrong end of an excoriation by Fresno County Supervisor Nathan Magsig.

County officials told The Sun on Friday that Arambula waited in the lobby of the Fresno County Board of Supervisors’ lobby with a copy of Sun Tzu’s “The Art of War” in hand and staffers from The Fresno Bee in tow.

As Magsig, Fresno County Board President Buddy Mendes, and their colleague Brian Pacheco returned from a San Joaquin Valley Insurance Authority Meeting in Fresno County Plaza Building, Arambula stopped them to request a meeting, following a similar request made in a letter criticizing the County’s spending of coronavirus relief funding from the Federal government.

Magsig turned the criticism of the County’s coronavirus response around on Arambula.

A video posted by Magsig details the exchange:

“Go back to Sacramento,” Magsig said during the exchange. ““Empower us at the local level. We know how to handle the issues of Fresno County better than the governor.”

“I am not the only one who is concerned about the lack of urgency coming from the supervisors about vigorously combating the COVID-19 pandemic in our county,” Arambula said in a statement to the publication.

He added that Rousseau’s explanations were not up to par.

“I felt they provided superficial information, and I am not satisfied with their responses,” Arambula said. “We are hearing from the community, and they are demanding an emergency public meeting that will allow real input from them so that we can all work together to determine the best measures to slow the spread of COVID-19 and save lives.”

In a regular briefing over coronavirus on Friday afternoon, Rousseau shot back at Arambula.

“I didn’t appreciate the tone of his letter that he wrote us,” Rousseau said during the Zoom call.

Rousseau also challenged the need for a formal pow-wow with the legislator, noting that the Board handled the issue recently.

“I immediately offered to, and I provided him the information that we received today on how we spent the CARES act dollars and how we plan on spending them going forward.,” the County chief said. “He said some of our categories are ‘squishy’ because we aren’t sure where these dollars will be spent on upcoming pandemic items.”

“I also took him to task – for again – if you want to help us and be a part of the solution, don’t throw stones and sticks before you’ve actually asked for information and asked to be a part of the process,” he added.