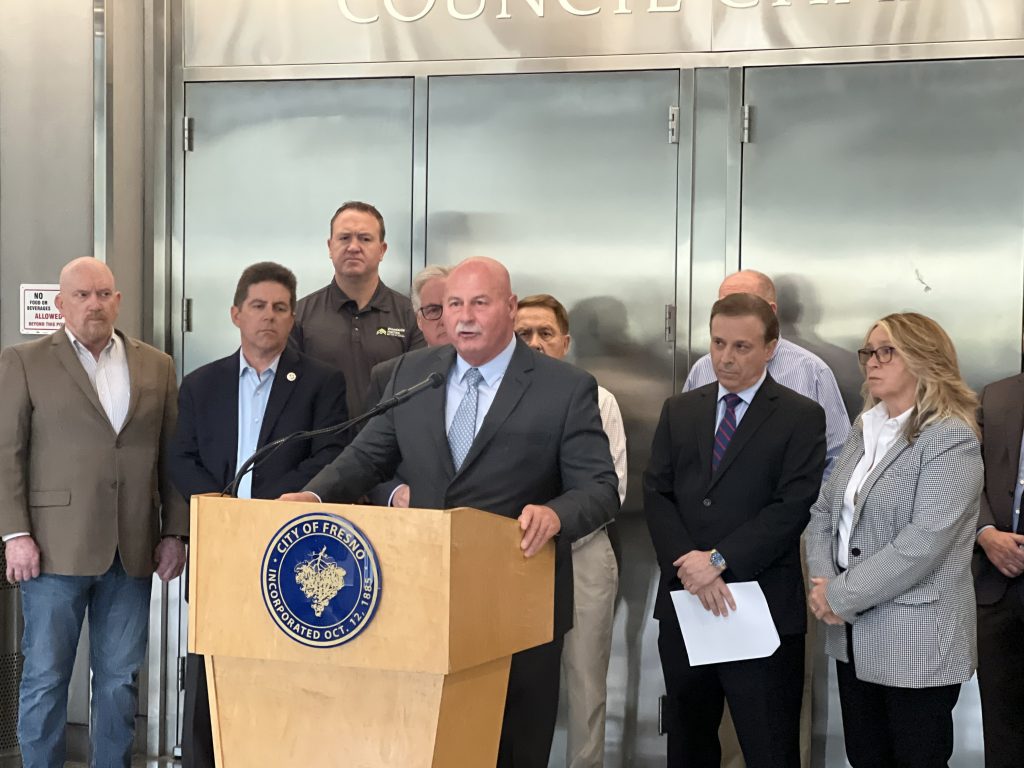 Pacific Gas and Electric, the utility that provides electricity to Fresno and much of California, is a “criminal enterprise,” according to one Fresno City Council member.

Councilman Garry Bredefeld sounded off on the utility at a press conference Monday to announce an item on Thursday’s city council agenda that would authorize the city to hire a consultant to study the feasibility of the city providing electricity directly to its residents.

Bredefeld, a conservative who has been vocal against government expansion throughout his time on the council, was asked how this idea fits with his beliefs of how government should operate.

“I trust the city much more than I trust a recidivist criminal enterprise like PG&E,” Bredefeld said.

He also offered up an alternate name for PG&E – which has been found responsible for starting wildfires across the Golden State that have killed over 100 people, declared bankruptcy in 2019 and raised rates by 22 percent last year and is seeking an 18 percent increase next year.

That name? The Plunder, Gouge, and Extortion utility company.

Problems with PG&E’s service center on the utility’s delays in providing electricity to new housing developments, businesses and school projects.

Goldsmith said the SCCCD has faced delays, stall tactics and miscommunication regarding the electrification of its new projects by PG&E over the past seven years.

Prandini said homebuilders have experienced delays of up to 18 months for the delivery of transformers. Developers have also had delays up to five months after the transformers have been delivered to provide power to subdivisions.

He added that there are more than 400 families that cannot move into their homes because PG&E has not provided electricity yet. Those families also find themselves in trouble when their mortgage rate locks expire, forcing them to reapply for rates that are now double what they were at the beginning of the year.

Ahead of the press conference, PG&E issued a statement saying it recognizes the challenges created by recent delays and is actively working to increase the number of customers it will connect through the end of the year.

“There are several factors affecting our ability to execute project schedules within our normal timelines. Currently, requests for new gas and electric service connections are outpacing our forecasted demand. Available resources to meet the growing demand are both reduced and more costly due to inflation and continuing supply-chain delays,” PG&E said.

“While we understand the frustration some are feeling, exploring a public takeover will not benefit customers – whether in Fresno or elsewhere. We are committed to working together to solve these challenges. PG&E’s assets are not for sale, and even exploring municipalization will likely impose significant long-term costs on local taxpayers.”

Dyer pointed to San Diego and Sacramento as successfully breaking off from their respective utility providers and are models that Fresno could follow.

The mayor said PG&E is “single-handedly destroying our local economy.”

“Over the past 18 months my office has been notified monthly by builders and business owners about PG&E’s delay in bringing electricity to their projects once they’ve completed them – what we refer to as the electrification of buildings. In each case we have reached out to PG&E, we have worked through their bureaucracy, and we have gotten electricity provided to those buildings. The truth is we should’ve never had to intervene in the first place, and the other fact is before we were ever notified there were months and months of delays that had occurred where people could not move into their homes or businesses could not be operated within our city,” Dyer said.

“And to all of our surprise, we recently learned that PG&E has now canceled all of their outside contracts with energizing crews, in essence creating a moratorium on housing and new business in our city. And this is in the midst of a housing crisis that we have right here not just in the City of Fresno but throughout California where we have people that cannot find places to live.”

Dyer met with PG&E CEO Patti Poppe in Bakersfield last Friday at an economic summit and said they had a cordial conversation. He said Poppe was attentive and understood the issue at hand.

He pledged to work with Poppe as the city explores all options to provide electricity to its residents.

“But the simple fact is I do not, as the mayor of this city, want to be pacified or placated by conversations that I have with PG&E executives,” Dyer said.

Dyer and Bredefeld did not know what the cost of the study would be at this time. Dyer said the study could take up to 120 days to complete once approved by the city.

One option to get to the bottom of the utility’s problems that is off the table is a state audit.

Patterson, who serves on the Joint Committee on Legislative Audit and has a history of working with the California State Auditor, told The Sun that his office explored an audit but was told that the state auditor cannot look into PG&E.

“This is what PG&E fears most, that large scale regions, municipalities with hundreds of thousands of utility customers already will take the next step not just to provide utilities and garbage and sewer and water, but the provision of electricity as well,” Patterson said.

“And so you’re seeing a number of municipalities that have done it well, a number of regions that have done it well in the state. And I predict that while we are doing the feasibility, we’re going to see PG&E making some decisions to start turning stuff on, because they fear this more than anything else. And I think it is justifiable fear on their part because PG&E has to participate in the effort to explore having the utility based in the region.”