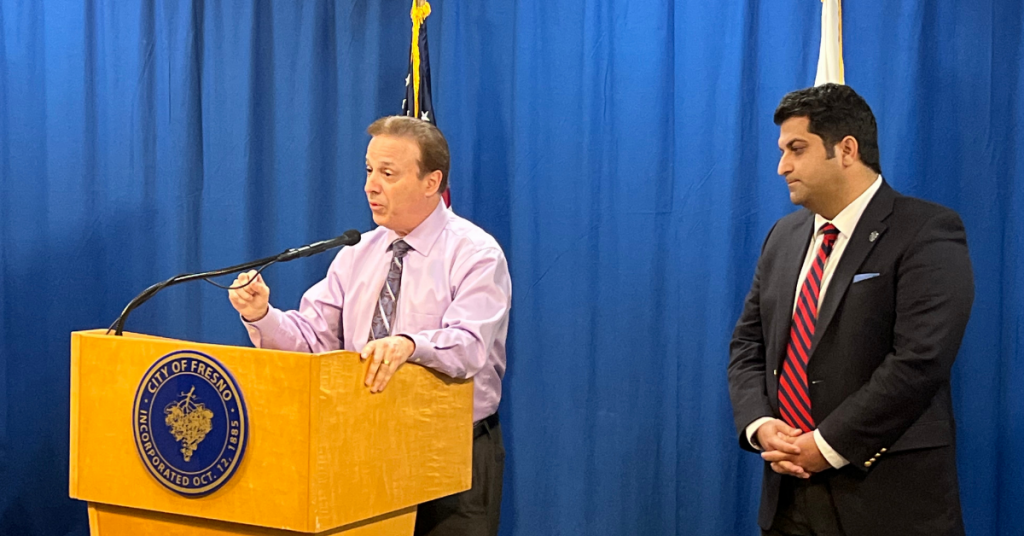 The operator of Fresno’s woebegone Granite Park is once again facing questions, this time over apparent lack of insurance coverage for the park, two Fresno lawmakers alleged on Wednesday.

Fresno City Council members Garry Bredefeld and Mike Karbassi held a press conference at City Hall on Wednesday in which they revealed an email from the city’s insurance coverage counsel to a lawyer for the Central Valley Community Sports Foundation (CVCSF), Frazier’s nonprofit that runs Granite Park, regarding an apparent lack of insurance.

Without insurance coverage, Bredefeld and Karbassi raised concerns that the city could be on the hook for a costly lawsuit if anyone is injured at Granite Park at an event, such as one of the many baseball games that are played there.

“Someone can get seriously injured and sue the city for tens of millions of dollars, and we would have absolutely zero protection,” Bredefeld said. “Someone can end up drinking, hurt someone, kill someone – the city can be sued for tens of millions of dollars with absolutely no protection. The city council is aware of this, and they’re completely negligent in meeting their fiduciary responsibilities to the taxpayers, to the constituents.”

With the council holding a special meeting Thursday, Bredefeld said an individual in the city administration made a request to Council President Nelson Esparza to discuss the breach of contract during closed session.

Esparza released a statement during the press conference saying that there was never a request made to place the item on the agenda.

Bredefeld’s response: “I can tell you for a fact that’s a lie because I know city staff – and I don’t want to place somebody in jeopardy who’s a city staff member – but it’s an absolute lie. But there’s nothing new. They often lie.”

Along with Esparza, Bredefeld was also referring to Council members Esmeralda Soria, Miguel Arias and Tyler Maxwell, whom he has branded the “Gang of Four.”

Their relationship has led to the two-term lawmaker recusing herself from a wide array of discussions on the council regarding Granite Park and Frazier, notably a proposed $4.3 million settlement for Frazier, which was pulled at the last minute last June when Fresno County District Attorney Lisa Smittcamp opened an investigation into alleged Brown Act violations.

Bredefeld said he became aware of this issue within the last two weeks and called out the bloc of lawmakers for not addressing it immediately, keeping the city at serious risk.

“It should’ve been addressed on the closed session meeting tomorrow. The council president, who’s a certified member of the corrupt Gang of Four, refused,” Bredefeld said.

“Why? Why would you not want to address this problem? Why would you want to wait one more dan than you need to to address this problem? Well it’s because we have a corrupt Gang of Four, and this is more of that kind of corruption where we just turn a blind eye to a developer/operator at Granite Park who for years has been doing these kinds of things.”

In an email dated March 30, James Wilkins, legal counsel for the city, detailed to CVCSF lawyer David Weiland how Frazier has not complied with his contract to operate Granite Park.

“CVCSF has not procured insurance as required by the Granite Park contracts. These failures are serious and constitute material breaches of the contract requirements. The City agreed to provide a conditional use permit but required insurance to protect the City from the increased exposure associated with the furnishing, sale, and distribution of alcohol,” Wilkins wrote.

“CVCSF has failed to comply with material terms of its contracts with the City. The City has made it clear that CVCSF must immediately cure these breaches. In the meantime, no furnishing, sales, or distributions of alcohol at Granite Park are allowed.”

Bredefeld and Karbassi also provided an email from the city to CVCSF’s counsel in March 2021 detailing that Frazier was in breach of contract for various issues, such as failing to install required improvements and for installing unauthorized improvements.

While Karbassi joined Bredefeld, he noted that his displeasure lies solely with Soria and Arias.

Karbassi and Soria are currently running against each other for the open 27th Assembly District, but Karbassi said the race was not a factor in his decision to join Bredefeld in speaking out.

Karbassi joining Bredefeld Thursday was in and of itself a statement.

Bredefeld previously held a press conference at City Hall to discuss how each member of the foursome spends their district funds, dubbing their budgets as “slush funds,” and accused them of using taxpayer money on personal and campaign expenses.

“I’ve already been threatened,” Karbassi said. “I’ve been told that if I do this, if I ever come out here with Garry, it’s going to be used against me – that I’m going to lose funding for this in my district, for that in my district.”

While Karbassi noted that this specific issue is a big deal, he called it “nothing” compared to other happenings behind the scenes at City Hall.

“Unfortunately there are a lot of things I can’t share with you because they’re attorney-client privileged,” Karbassi said. “I’m physically tired. I’m exhausted having to go through this all the time. I come here to do work, take care of my residents. This is not about partisan politics. This is about ethics, and unfortunately we’re dealing with a case that yes, a developer has a relationship with a council member, and that has plagued us for a long time.”

Karbassi said Frazier is “getting a sweetheart deal” from the city and called on Mayor Jerry Dyer, the U.S. Attorney’s Office and “the powers that be to get off their ass and do something about it,” adding that he is sick of Soria and Arias holding the city hostage.

GV Wire previously reported that the Federal Bureau of Investigation was assessing three lines of inquiry related to city business, including the city’s dealings with Frazier and former Rep. TJ Cox (D–Fresno) in contracting management of Granite Park to CVCSF.

“That’s what it is,” Bredefeld said. “It’s a specious lawsuit to hold over these people and say, ‘If you give us $4.3 million we’ll drop this $10 million lawsuit.’ It’s a bunch of crap. It’s ridiculous. There are a lot of things that the former administration were – racist was not one of them, but it’s just a tool to try to extort money from the taxpayers of the City of Fresno. And it was going to be successful until our DA investigated them for Brown Act violations, oh which by the way the corrupt Gang of Four refused to participate in.”

Speaking to McClatchy, Dyer expressed exasperation at the situation with Frazier, but noted that his hands were tied. Any changes to the contract require City Council approval:

“I can tell you if that authority did rest with my administration, that action would have already been taken. We have done everything that we possibly can within my administration to work with the folks at Granite Park, to work with Mr. Frazier, to do everything we can to allow his operations to be successful. Unfortunately, it appears that there is some something that is preventing them from being able to stay current on their insurance, something that has prevented them from staying current on paying their bills. The main concern for us is the fact we are allowing someone to operate on that property and exposing the city of Fresno to unnecessary liability.”