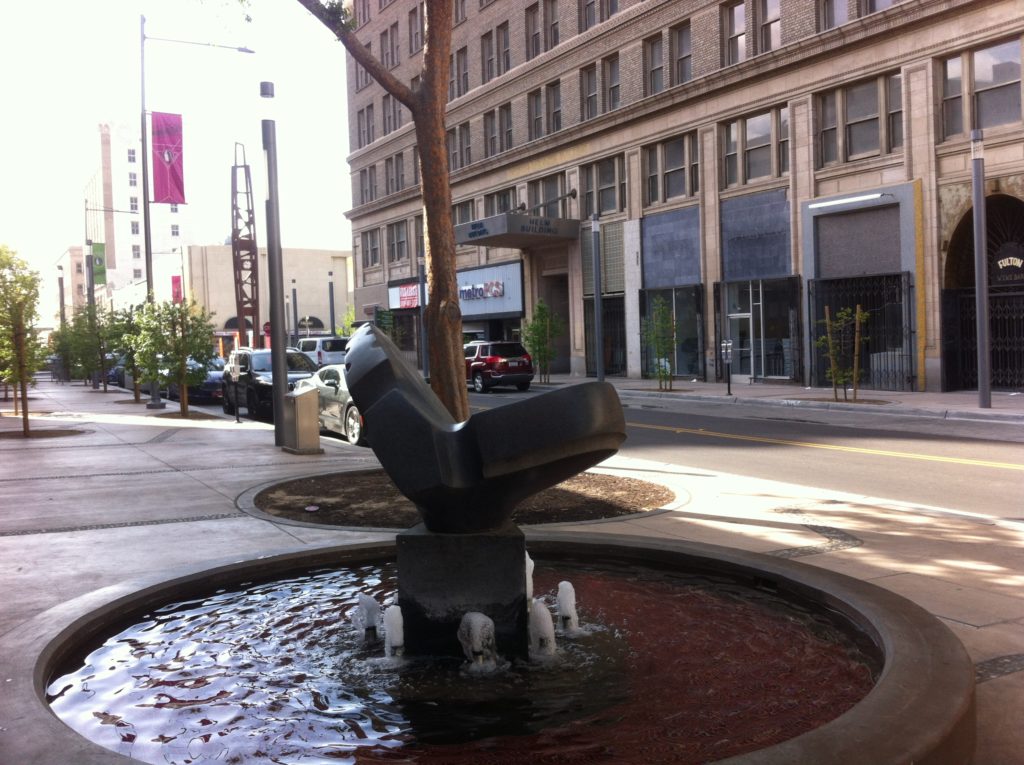 Transportation infrastructure was much on my mind Friday morning (April 12) as I hurried to Fresno Council of Government headquarters in Downtown Fresno.

It really is a thrilling topic, if often beyond my comprehension. Here’s an example of why the topic is so delightful for a reporter.

I parked on Amador near Broadway, next to the Vagabond Lofts apartments. That enabled me to get in a 20-minute walk to COG, located above Club One Casino.

My route took me south along Fulton. When I got to the southeast corner of Fulton and Mariposa streets (oh, how wonderful to type those words; no more Fulton Mall!), I bumped into Sevak Khatchadourian.  Khatchadourian is owner of the Pacific Southwest building on that corner. He also owns the Helm building (built in 1914) on the northwest corner of Fulton and Mariposa.

Khatchadourian and his partners have made considerable progress in modernizing the Pacific Southwest building. A sign on a ground floor window touts the coming of La Boulangerie bakery and restaurant. I can attest from long experience that La Boulangerie in Fig Garden Village serves up unforgettable brownies.

In my opinion, Khatchadourian and his partners have a bigger challenge with the Helm building. But I know they’re making plans to begin its transformation. I read about those plans on one of the agendas posted for the city’s Historic Preservation Commission.

“When do you begin work?” I asked Khatchadourian, pointing to the Helm’s ground floor.

“When we get the permits.”

“What are we talking about – retail and restaurants?” I asked.

“What about floors two through nine?” I asked. (My mistake; the Helm is actually a 10-story building.)

“No plans as of now,” Khatchadourian said.

With a smile, Khatchadourian went into the Pacific Southwest Building. I finished my journey to the meeting of COG’s Policy Advisory Committee (full of city managers and county representatives).

An operational statement submitted by Khatchadourian to the Historic Preservation Commission earlier this year outlines the first two phases of the Helm’s rebirth.

Phase I proposes a new door opening on Mariposa and new accessible bathrooms. There would be several improvements on the Fulton side, including restoration of the building façade.

The ground floor has seven tenant spaces and a lobby that leads to the upper nine floors. Those nine floors traditionally have been offices. Near as I can tell, the building is vacant.

A portion of a staff report to the Commission says: “1101 Fulton Mall is … an excellent example of Renaissance Revival commercial architecture designed by noted architect George Kelham. The building was the first steel frame high rise building on Fulton Street.”

The Helm is a historic treasure. Khatchadourian needed the Commission’s blessing to proceed with his project. He got it, along with certain conditions, on a 5-0 vote.

According to meeting minutes, Commission Chairman Patrick Boyd said in conclusion: “Like many of our projects, a lot of interesting archaeology can come up as the projects go along. It will be interesting to see what we find when the newer facades are taken down.”

Replied Dan Zack of the city’s Development and Resource Management Department: “I would be shocked if there weren’t any surprises under there.”

The obvious takeaway here is that the multi-phase Fulton Mall-to-Fulton Street project, initiated by former Mayor Ashley Swearengin and continued by current Mayor Lee Brand, is moving ahead. Improved transportation infrastructure along Fresno’s high-rise corridor is key to any success.

It’s a story many years in the making.

But take a look at my photo of the Helm that accompanies this story. What struck me throughout my walk to COG was how clean all that transportation infrastructure was. I’m talking about Fulton and its sidewalks. I’m talking about the streets and sidewalks in the Cultural Arts District. Everything looked freshly scrubbed (this was between 9:30 and 9:50 a.m.). I saw only a few pieces of litter. I picked them up.

Fresno, like any city of a 500,000-plus people, will always have transportation infrastructure challenges. That was the main topic of the COG Policy Advisory Committee. I will file several reports later this week on what the committee members heard from staffers and discussed among themselves.

But regardless of its status, the transportation infrastructure of any city is greatly enhanced if it’s clean and the entire community takes pride in cleanliness.

Fresno, when it’s clean, is a beautiful city.