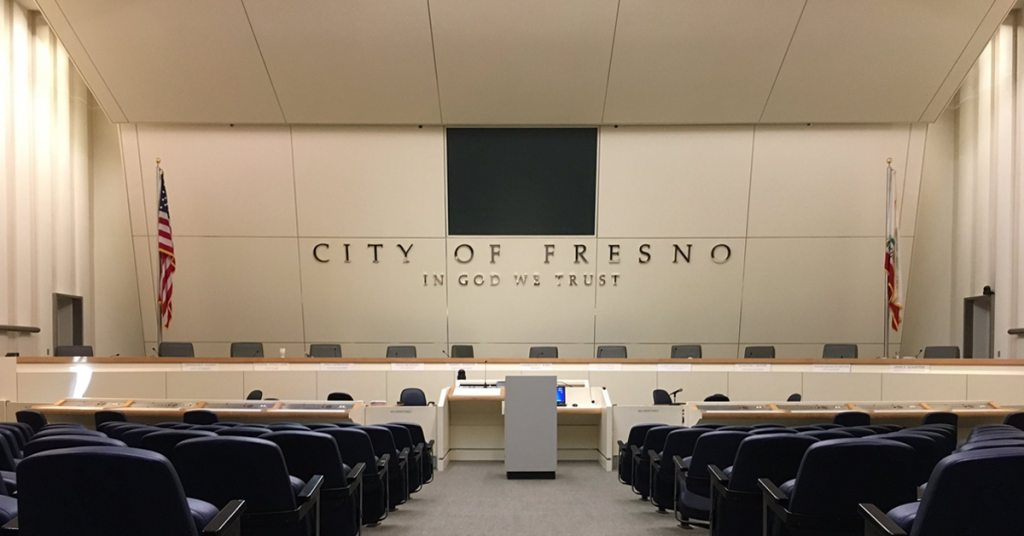 After hours of back and forth argument and debate, the Fresno City Council worked its way through 53 budget motions on Thursday.

Notably, public safety and emergency services played a central role in much of the heated debate as accusations were leveled against certain councilmembers for trying to “defund the police.”

Here’s a look at some of the bigger budget plays panned out:

The original motion was to remove $1 million from the mayor and city manager’s budget to go toward the fire department’s budget to fund new firefighters.

It was sparked by the surprising announcement that the Brand administration opted to not apply for a FEMA-administered SAFER Grant in pursuit of hiring nine firefighters.

One such firefighter was a full-time safety officer, a position prescribed as part of the Fresno Fire Department’s review of a 2015 incident.

Councilman Mike Karbassi took issue with the fact that the decision would negatively affect not only Mayor Lee Brand’s team, but the upcoming administration of Mayor-Elect Jerry Dyer.

In response to Karbassi, City Councilman Nelson Esparza amended the motion to $550,000, which more closely lined up with what the Fire Department would need to cover the new positions.

Brand chimed in, calling the motion a “punitive action” against his office.

“I think this would send a terrible message,” Brand said. “We’ve been working very well this past year together – a series of crises and came through. This, I think, would damage the relationship dramatically.”

Ultimately, the council agreed with Brand’s evaluation and decided to shy away from attacking the mayor’s budget.

That led to an idea to take the needed funds out of the police department’s budget instead, which spurred more debate.

“I don’t want to be in the position where I’m essentially robbing Peter to pay Paul and have to layoff people, especially when there’s a pandemic,” said Councilman Luis Chavez.

After arguing whether to amend the motion to defund the police department instead of the mayor’s office, the council voted on Esparza’s proposed amendment to remove $550,000 from the mayor’s budget.

After some time, the council voted on Esparza’s proposed amendment to remove $550,000 from the mayor’s budget. The motion failed 2-4-0, only garnering support from Esparza and Garry Bredefeld.

The next motion was to add three sworn firefighter positions, although there was no funding source identified.

The council extrapolated the cost to fund the firefighter positions over five years, which totaled over $2.6 million.

Quickly, Esparza proposed to find $2.6 million in one-time costs from the police department’s budget to cut and use that to fund the new firefighter positions for five years.

Bredefeld questioned Police Chief Andy Hall asking if the missing $2.6 million would affect the services the department could provide.

Hall’s answer: Yes, it would.

“This is all political now,” Bredefeld said. “This is a bunch of crap and just really unfortunate that we’re focused on the fact that we’re getting you a SAFER Grant to get you firefighters, and now it’s a political agenda to mess with the police department and help defund them for the future over five years under the guise that we’re funding firefighters. This is a sad day, it’s pathetic. I will not support any of this crap, and it’s really disgusting.”

Since the motion wasn’t gaining any traction, Esparza backed off and proposed that the administration look for one-time costs to cut and fund the $2.6 million needed for the firefighters and report back on June 30 with its findings. The motion passed 6-0.

City Council also considered a motion to allocate up to $300,000 toward the Advance Peace Program.

The controversial program passed the Council last year only to be vetoed by Brand.

Advance Peace is designed to look for potentially dangerous shooters and bring them into the program with the intent to prevent gun violence.

In its previous iteration, those potential shooters could have received a $1,000 stipend to join the program.

Things are different this time around.

“I think it has the promise to be successful,” Brand said. I think we made the changes we can all live with.”

The Fresno Economic Opportunities Commission is taking on a role overseeing the program, and mayoral advisor H Spees said no money will go to the program participants.

City Council will also have oversight through approving a contract with the EOC for the program.

The motion passed 5-1-0, with Bredefeld being the lone councilmember to vote no, but saying that he’ll reconsider the program in a year once the results are in.