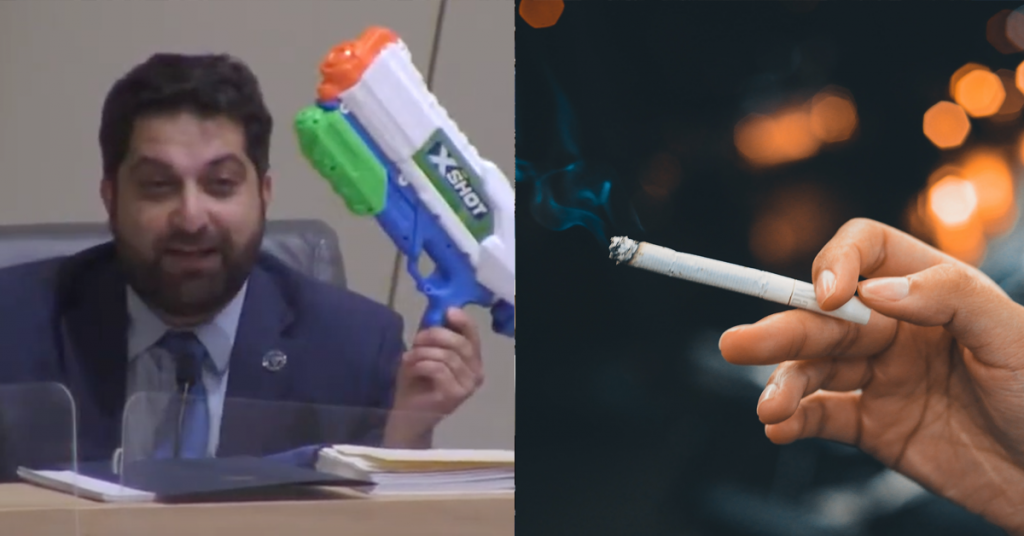 Firearms were on display at Thursday’s Fresno City Council meeting.

Water guns, that is.

On a 5-2 vote, Council members voted to ban smoking in and around multi-unit rental properties, with an exception for designated outdoor smoking areas and apartment patios and balconies.

Councilman Mike Karbassi – who along with Councilman Garry Bredefeld opposed the ban – had a suggestion to help the code enforcement department enforce the ban: Shoot the cigarettes with water to put them out.

“Our code enforcement – with $10 at Target – we can be equipped so when we go and see someone smoking in their own home, we can fire this and put out that cigarette or cannabis, whatever they’re using,” Karbassi said.

While Karbassi made his suggestion in jest, he raised the point that code enforcement will inevitably have a tough time with enforcement and face struggles similar to the mask ordinance that was imposed during the COVID-19 pandemic.

“Let’s find some squirt guns to keep our city code enforcement safe, because they had this exact same issue when we sent them into harm’s way to deal with the craziness of the mask ordinance,” Karbassi said. “We knew masks were right, but we were also putting them in a situation that was very challenging for them. I don’t know how that affected morale, but I just don’t want to do that again despite the merits of not wanting people to smoke.”

The opposition also centered on the idea that this bill infringes on personal rights in private residences.

Bredefeld said he wishes people did not smoke for their own health and to derail the effects of second-hand smoke, but the ban does nothing to help people stop smoking and instead represents further government overreach.

He also called his colleagues on the council hypocrites for their work to bring cannabis dispensaries into Fresno only to turn around and ban cannabis smoking in multi-unit rentals.

“There’s a lot of hypocrisy with this that I find as well. This council and people who are going to support this today eagerly and breathlessly supported bringing marijuana dispensaries to this city. Three in each district. And in this – it’s not only not smoking, you can’t smoke marijuana in your home, you can’t vape in your home, but we’re going to bring all the products to you to buy and to smoke,” Bredefeld said.

“If this isn’t ultimate hypocrisy I have no idea what is, because you all couldn’t wait to bring marijuana here. You got it here. The city’s going into the manufacturing and distribution business of marijuana, but we’re saying, ‘That’s a bad product, don’t want you to smoke it in your house. You’re not going to be able to do that.’”

But the bill’s sponsors – Council members Tyler Maxwell and Nelson Esparza – argued that the ban is rooted in creating a healthier Fresno, which comes first.

Maxwell and Esparza noted the vast community interest from their constituents for this action, including many youth who pushed for the ban.

However, some groups, while supportive of the policy, wanted to see the council take further action and institute more restrictions on smoking.

Lynda Barbour, a representative with the American Cancer Society, took issue with the exclusion for balconies and patios.

“Our experience in working with smoke free policies indicates that allowing smoking in exclusive use areas will not protect residents from second-hand smoke,” Barbour said. “You’ve already included a buffer zone of 20 feet, and you know that smoke travels. When smoke is on a balcony or patio, this often goes directly into nearby open windows or doorways or ventilation.”

A Denver consulting firm has been tasked with heading up future plans for broadband operations throughout Fresno.

The Fresno City Council unanimously agreed to sign a contract with Denver-based Magellan Advisors to develop the city’s broadband plan to enhance access to the unserved and underserved communities.

Magellan Advisors will receive a maximum of $91,770 as part of the contract for the services provided.

Fresno will have access to funds through the American Rescue Plan Act of 2021 (ARPA) and the state to use for it’s broadband development.

“They’re going to come up with some recommendations for us to use the fiber, because they know the funding sources in the state, they’re aware of the ARPA funds and there are other funding sources that we will see that they will bring to us,” said Bryon Horn, the city’s Chief Information Officer of the Information Services Department said, during Thursday’s meeting.

In its proposal to the city, Magellan Advisors said it will take five months to formulate the broadband plan.

The first step will be to conduct an asset assessment, which involves analyzing all fiber cables and infrastructure currently in place throughout the city, followed by a market analysis of the Fresno area to identify the services that are currently available.

Magellan Advisors currently serves over 400 cities and utilities in broadband efforts and has led the planning and management of over 50 fiber broadband networks which connect more than 1,000 schools, hospitals, government offices and community organizations.

“I think all of our priorities is to serve the underserved areas,” Assistant City Manager Georgeanne White said. “It’s how do we get there with what resources. We’re hoping that this plan will help us get all of those pieces together so we can figure out what the road map is.”