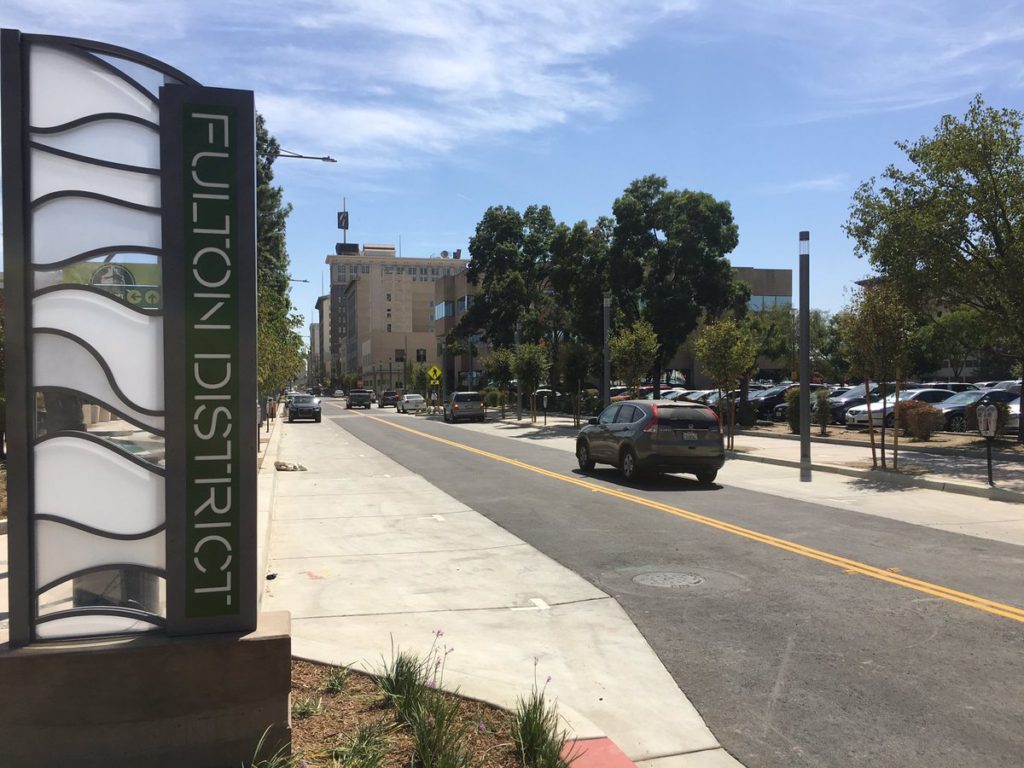 City Hall has proof that the reopening Fulton Corridor to vehicular traffic has been a success both to business and the community’s quality of life.

City Hall is also touting its latest effort to make paying for parking in Downtown (and anywhere else with city parking meters) a more customer-friendly experience.

City Hall has also been measuring daily bicycle and pedestrian traffic along Fulton Corridor. The measurement is called “Bike-Peds/day.” In 2015, City Hall says, the Bike-Peds/day number was 2,614. In 2019, the count was 3,505 Bike-Peds/day. That’s an increase of 34 percent.

At the time of Fulton Corridor’s grand reopening in October 2017, Mayor Lee Brand said both the city and the region would see a bold new beginning for the heart of Fresno’s Downtown. The numbers, Brand now says, “are proving that in a remarkable way.”

Brand, in a news release, goes on to say: “I’m pleased that our investment in Fulton Street is showing strong financial returns and we’re doing everything we can to encourage growth and provide stability. This is exciting news.”

Says City Manager Wilma Quan: “This is exactly what we envisioned when we first started talking about opening up Fulton Street to traffic. As someone who has lived and breathed this project since its inception, I’m thrilled to see that there’s proof positive that we’re bringing back businesses and people to the heart of our downtown.”

City Hall also partnered with a firm called ParkMobile to enable drivers to pay for their parking from their mobile device. The ParkMobile app is now available for over 2,000 spaces around the city.

I gather from the City Hall news release that most of those spaces are in Downtown.

New stickers will provide information to drivers on how to pay for parking using the app. ParkMobile is available for free for both iPhone and Android devices, or by registering at parkmobile.io.

According to the City Hall release, drivers set up their account. They can then immediately begin using the system with their mobile device by entering the zone number posted on the parking meter. They choose the duration of time they want to park. They hit the “Start Parking” button to begin their session. The ParkMobile app also allows users the ability view or add time to their parking session from their mobile device.

Says Jon Ziglar, ParkMobile’s chief executive: “We’re thrilled to expand our network to Fresno. We want to provide every driver throughout California with a smarter parking experience that allows them to process their transactions using the ParkMobile app.”

Says Thomas Gaffery, Fresno’s parking division manager: “This is the first of many exciting improvements for parking in Downtown Fresno. We still have many more changes in store, including the launch of credit card enabled parking meters.”