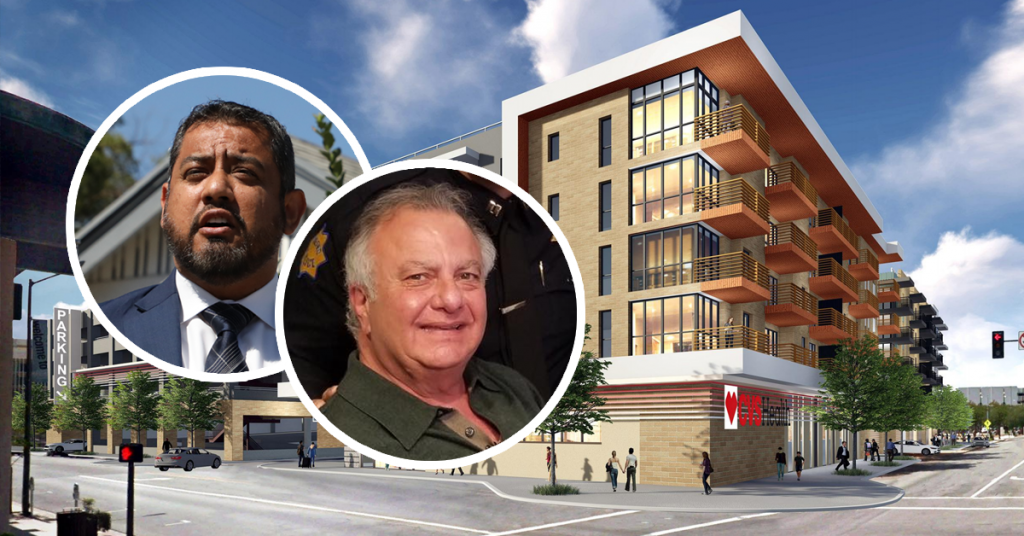 A local developer is accusing Fresno City Councilman Miguel Arias of running a “pay to play” scheme and claiming city leaders discriminated against him amid his pursuit of a project along the northern end of Fulton Street in downtown Fresno.

Tutelian filed a government claim against Arias and the city in July and is seeking $12.45 million in damages, stemming from the City Council’s February decision to not renew the Exclusive Negotiating Agreement (ENA) it had with Tutelian for the development.

Per the claim, the city “had an express obligation to negotiate in good faith, but chose instead to violate the ENA to the detriment of [Tutelian] and the entire Fresno downtown corridor, demonstrating disparate treatment of [Tutelian] versus other similarly situated projects.”

Initially, Tutelian signed the ENA with the city in 2018 to redevelop much of the block along Fulton Street between Tuolumne and Merced Streets.

That project would have moved the CVS Pharmacy on the site to the corner to go along with 160 multi-family residential units and a parking garage with over 500 spaces. The first floor of the parking garage would also have included space for retail shops.

The project drew comparisons with another still-pending mixed-use development along Fulton Street, led by developers Terance Frazier and Mehmet Noyan.

Attached to Tutelian’s claim is a draft version of a yet-to-be filed lawsuit against the City of Fresno and Arias alleging discrimination against him and disparate treatment compared to Frazier, fiancée of Councilwoman Esmeralda Soria, and Noyan.

“Plaintiff is informed and believes, and upon such information and belief herein alleges that, in as much as Defendants, for the similarly situated South Stadium Project, did consider and regularly grant at least nine extensions over five years, without the same process of changing conditions and creating delays experienced by Plaintiff herein, Defendants disparate treatment of Plaintiff violates and deprives Plaintiff of his civil right to due process and equal protection…” under state and Federal law, the draft suit reads.

Last November, the council agreed to extend the ENA by 60 days after Tutelian’s negotiations with CVS took a hit during the pandemic, leading to a February decision by the council that ultimately axed the project.

The council had been set to approve another extension in February, but Arias removed it from the agenda with the support of Council members Nelson Esparza, Tyler Maxwell and Soria.

Shortly after agreeing to the ENA, Tutelian filed a claim against the city in regards to a lease agreement he had with the city since 2013 over a parking lot.

With the ENA originally set to expire in 2019, Tutelian agreed to drop the first claim with the city council extending the ENA to March 2020, which was then extended to the end of the year.

In the new claim filed in July, Tutelian alleges that during a meeting between Arias and the developer’s representatives, Arias “demanded that [Tutelian] ‘contribute’ $12,000 to his campaign, expressly stating that Mr. Tutelian is ‘cheap,’ and needs to learn how to contribute like others if he expects help.”

Tutelian also alleged that the city did not meet the terms of the ENA by failing to negotiate in good faith through the actions and at the direction of Arias.

In response to the allegations, Arias provided the following statement to GV Wire, which first reported the complaint:

“The previous Mayor and his administration gave Mr. Tutelian an exclusive negotiating agreement (ENA) that allowed him to unilaterally negotiate the development of the north end of Fulton Street in Downtown Fresno, including both public and private properties. Neither of the other private and public owners were consulted prior to the agreement nor were they parties to the agreement.

“The ENA granted to Mr. Tutelian required that he meet certain provisions by a certain date, which he did not meet, before the time limit expired. Mr. Tutelian promised to obtain the necessary parcels of land and arrange financing for the development. After numerous extensions were given to Mr. Tutelian, he remained unable to meet these conditions, and the agreement expired. He now wants another extension over someone else’s property without their consent.

“Mr. Tutelian is now resorting to baseless allegations to try and get his way. The simple fact is that he promised to obtain the necessary land and financing and he failed to do so. His time ran out, even after the City gave him additional extensions. I am confident our legal system will uphold the City’s position.

“I will continue to support development projects that benefit my constituents and the residents of Fresno. What I will not do is give in to special interests and their personal threats and their frivolous, retaliatory litigation.”

“I have stated for over 2 years there is a ‘stench’ at City Hall and I believe Miguel Arias and others are at the core of that stench,” Bredefeld said in a statement published to Facebook. “This ‘pay to play’ extortion scheme reflects that corruption and disgraceful conduct.”