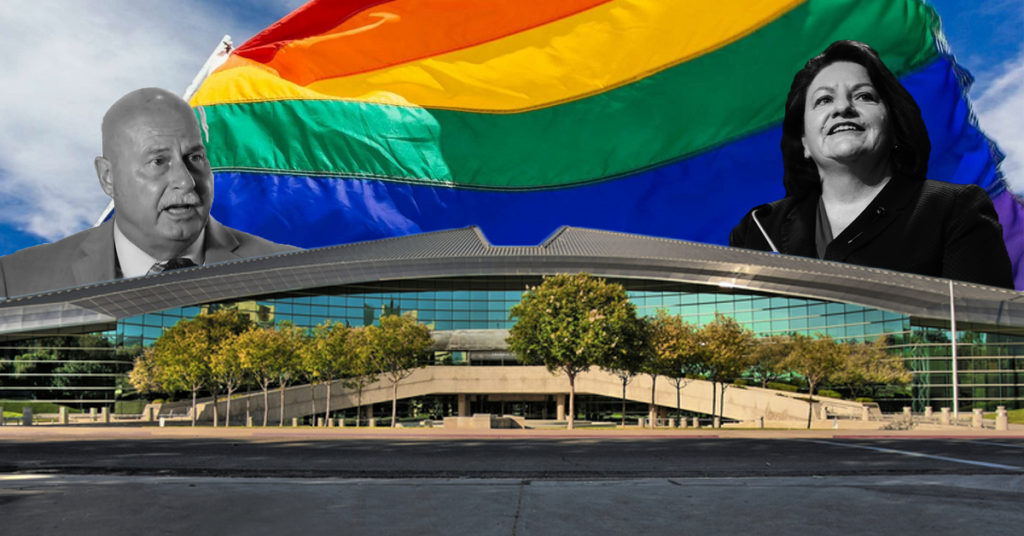 The man Fresnans tasked with staring down Bulldog gang members for two decades finally blinked – over the LGBT Pride flag.

Fresno Mayor Jerry Dyer’s stunning, single-day reversal on flying the rainbow flag at Fresno City Hall was as jarring to members of the LGBT community as it was to local conservatives and Christians.

For the latter, they saw his Thursday proposal to open up a freshly dubbed “Unity Park” at Eaton Plaza – a free speech zone with seven flagpoles for any organization to hold flag-raising ceremonies – as a solid compromise yet holding on his “country over cause” stand.

For Fresno’s LGBT residents and likely a supermajority on the Fresno City Council, the park proposal amounted to a separate-but-unequal proposition that only further expanded the divide.

The next day, Dyer folded on the hot-button cultural issue, announcing in a tearful press conference that Fresno would fly the rainbow flag and that he would attend a Pride Month celebration at City Hall later this week.

Dyer, in his press conference on Friday, said a series of phone calls from Fresno-based LGBT leaders and his attendance at Fresno City College’s own flag-raising ceremony – filled with impassioned speeches – opened his eyes to making a change.

“This is really not a political issue. Not a Republican or a Democratic issue. It’s a people issue,” he said.

It may not have entirely served as a political issue, but another intervening force made its presence known amid the fracas, too.

In the immediate wake of Dyer’s Thursday press conference announcing the Unity Park compromise, inquiry from Atkins’ office about the flag skirmish prompted a review of a highly sought-after budget request, multiple Democratic and Republican Capitol sources told The Sun.

Fresno’s highly-publicized battle over the pride flag caught the attention of multiple members of California’s LGBT Caucus, serving as a week’s worth of fodder in the state’s Capitol about the city’s claims of inclusivity.

But the soundings from Atkins’ corners of the $25 million ask for the firefighting training center – described by Sacramento sources as anywhere from mild curiosity to a possible threat on the request – served as a ringing of alarm bells that the decisions being made in Fresno’s City Hall were affecting issues far beyond the city limits.

City of Fresno officials strongly pushed back on claims related to the firefighter training center, saying the request was “never, ever threatened” by the Senate President Pro Tem.

By Friday, much of it would appear to be moot, as Dyer changed his mind and agreed to let the flag fly in time for a planned Pride Month celebration this week.

The larger question posed by the flag skirmish yet-to-be resolved is how Fresno will handle flag raising ceremonies at Fresno City Hall in the future, including a resolution awaiting Dyer’s signature or veto resting the flag-raising power in the hands of the City Council.