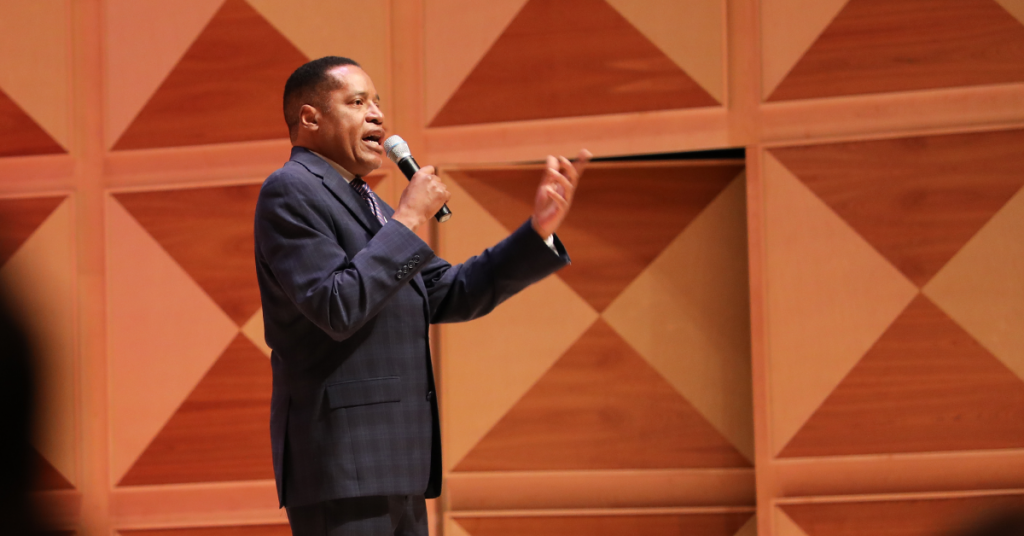 Elder, a leading contender in the election, was flanked by crime victims and Kern County District Attorney Cynthia Zimmer during a brief press conference at the Liberty Bell, located at the center of the County’s criminal justice complex.

“Why? Because Gavin Newsom does not care about crime victims. He cares more about criminals than he does about victims.”

Pearson, the mother of the late Adam Pierce and a heavily-active member of Mothers Against Drunk Driving, spoke about the June 22, 2002 car crash that killed her son.

Pierce died at the hands of Michael Maurice Ingram, a then-28 year old who had had three previous drunken driving convictions on his record.

Ingram, who was convicted by a Kern County jury of second degree murder, was issued a 15-year to life sentence.

“When the inmate went into the institution, he followed all the rules,” Pearson said. “When it was time for him to come up for parole, the Parole Board under Gov. Brown said Michael Ingram was too dangerous to be released.”

He would return to the parole body a second time during Brown’s second stint as Governor, only to be rejected.

The parole process “is rough on families,” Pearson noted.

But the expectation that Ingram would have another lengthy stint before returning before a Parole Board was abruptly shaken-up following the election of Gov. Gavin Newsom in 2018.

Not only was he rapidly returned to parole officials for consideration, the tenor was different, she noted.

“When I walked in for the third time, it was different,” she said. “It almost kinda seemed like a party in there.”

Parole Board members granted Ingram’s request for release out of prison to San Luis Obispo County.

“They had the marching orders from the Governor to release Ingram,” she added. “Gavin Newsom has failed my family. He re-victimized my family.”

Elder took to the podium declaring a simple mantra.

“The number one responsibility of government is to make sure the bad guys do the time,” he said.

Both Elder and Zimmer hammered Newsom over the release of 20,000 inmates during the pandemic and the announced, prospective release of up to 76,000 more inmates from state prison facilities.

Boxer was mugged on the street near her home in late July by an assailant who ultimately stole her cell phone.

Newsom was attacked by a “mentally ill homeless man” in the Bay Area city while touring the area in mid-June.

The gubernatorial contender was referring to progressive prosecutors Chesa Boudin of San Francisco and George Gascón of Los Angeles.

“Gavin Newsom’s fingerprints are on both of them,” he added.

The talk radio host honed in on California’s decriminalization efforts, which predate Newsom’s tenure as Governor but have accelerated under his watch, as the principal ill driving up the state’s crime rate.