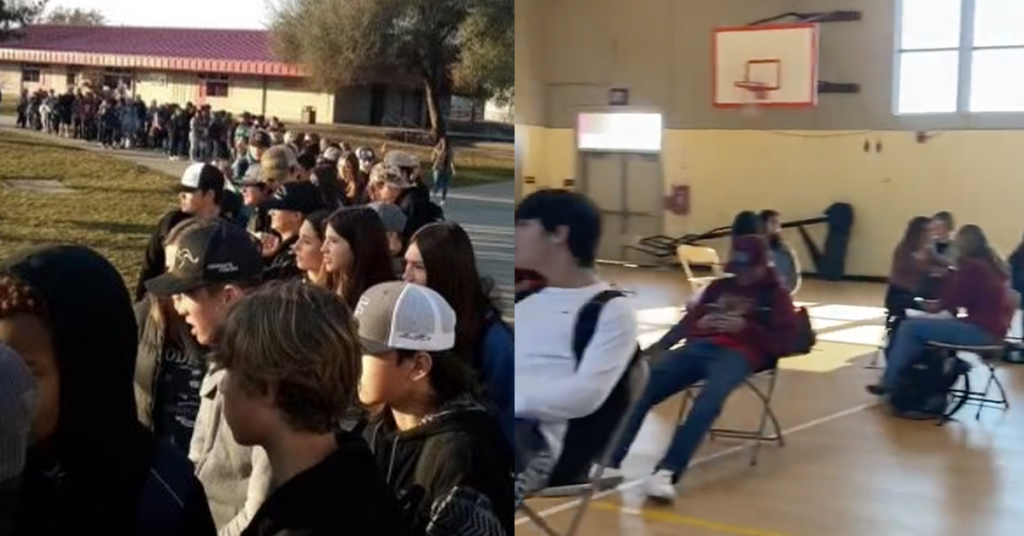 Hundreds of students across the campuses of Oakdale Unified Joint School District protested having to wear masks mere days after Gov. Gavin Newsom was seen at the NFC Championship Game in Los Angeles last weekend without a mask on.

The Twitter account “Let Them Breathe” posted a video of dozens of students sitting in the high school gym in protest of the mandate.

Let Them Breathe also started a GoFundMe drive to support “students who unmask by raising awareness with legal action.

As of Friday afternoon, the fundraiser had nearly reached its goal of collecting $15,000.

On Wednesday, Let Them Breathe said more than 500 students across the school district refused to wear masks in protest.

The situation in the community situated northeast of Modesto took a different turn on Friday as students walked from the high school to the district’s headquarters as part of the protest.

Let Them Breathe also claimed that the high school barricaded the doors to the gym where the students were being held.

School administration sent an email to the students informing them that anyone participating in the protest was required to report to the gym within the first 20 minutes of the start of the day.

The email stated that students would be excused for their lunch period and be allowed back into the gym to continue the protest. Students were not forced to stay in the gym, but if they chose to leave they would not be allowed back in.

The email said that students were expected to complete coursework online while sitting in the gym.