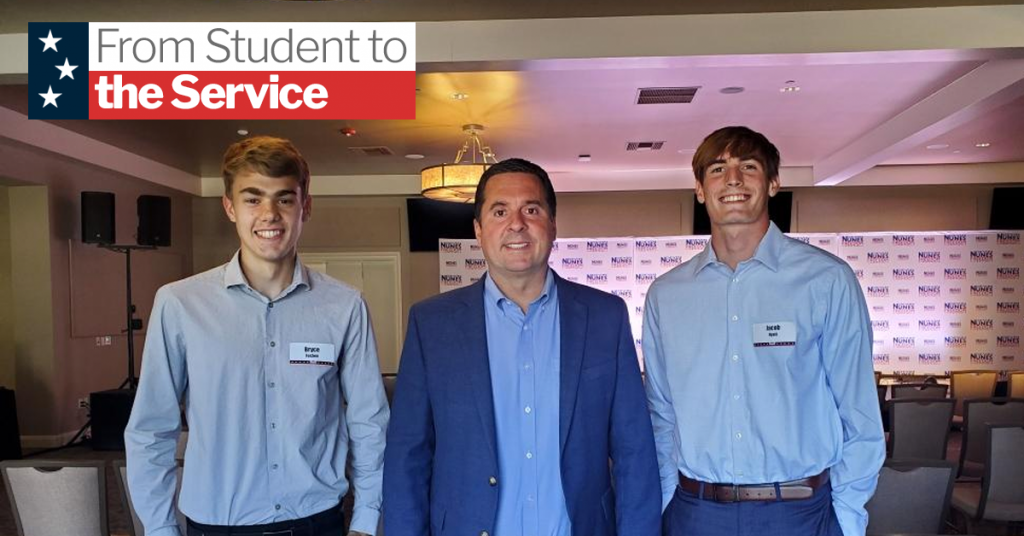 Fresno Christian High School’s top two graduates are headed off to military academies following years of a friendship in which they pushed and challenged each other to do their best.

Bryce Foshee, the Eagles’ valedictorian, is going to attend the Air Force Academy in Colorado Springs. Fresno Christian salutatorian Jacob Hyatt is moving to upstate New York to attend the U.S. Military Academy at West Point and compete on the track and field team.

The duo have been friends since kindergarten and worked side by side over their high school years – including in student government – as they raced to get accepted into the prestigious academies.

“He was the valedictorian, I was the salutatorian. I was the president, and he was the vice president. We’ve always been there to push each other along,” Hyatt said.

“I think it’s been great that someone has been there to help push me so I couldn’t get complacent with just settling for a B in a class. I had to get that A. It’s been worth it.”

The pair were both nominated by Rep. Devin Nunes (R–Tulare), and they had to go through an interview by a panel of five veterans to receive that nomination.

“My chair was in the middle of a 20-foot semicircle with these five very impressive people just staring right at my chair,” Foshee said. “I just walked in, and I was like, ‘Oh man.’ I was nervous.”

Hyatt added, “They knew I was going to do track at West Point, and they asked, ‘How do you know that you’ll make it through doing all the military stuff and track at the same time?’ It took me a second to answer that, and I basically just said, ‘I have a good work ethic, and it’s not a bad thing to ask for help when I need it. There’s a support system around me, so I just have to learn how to rely on that support system and be able to grow in both areas at the same time.’”

While that support system will be crucial at the academies, the support that Hyatt and Foshee gave each other throughout high school was crucial for their development.

Hyatt’s interest in West Point gave Foshee the jump start he needed to look at the various military academies as serious options.

“[Hyatt] was talking about West Point, and I started looking at the service academies more. And then my uncle was really excited about this,” Foshee said. “He’s been nagging me to go there since I was born. He gave me the numbers of a few cadets who’ve graduated and are still there, so I talked to them and was like, ‘Yeah, I’ve got to go here. This is awesome.’”

Initially, Foshee had looked at other schools like Stanford and USC to pursue a career in aerospace engineering. When he was a sophomore, his mother compiled a list of top schools to look into.

“She made a list of the best colleges, and she crossed out Air Force and the Naval Academy. She’s like, ‘You’re not doing that, obviously,’” Foshee said. “She didn’t want me to go to the military.”

But that all changed when Foshee and his parents had the opportunity to talk to an Academy alumni who is currently a pilot in the Air Force.

“They heard him talk, and they heard what he had to say about it,” Foshee said. “And he was very honest about it, but you could also tell how much the experience developed him. They were kind of afraid of me getting in there and becoming the stereotypical arrogant fighter pilot, and just being a jerk, but everyone they talked to was really nice and really personable. So they were like, ‘You know, it’s probably going to develop you positively.’”

With Foshee looking to serve in the Air Force as a pilot, there is one plane in particular that he would like to fly, calling it an “insane dream”: the Lockheed Martin F-22 Raptor.

“I think the F-22 is the coolest creation in the world,” Foshee said. “That would be sick. When I was a kid I had a poster of a Raptor on my wall.”

Flying an F-22 would be the culmination of a lifelong dream for Foshee, but regardless of where he ends up in the Air Force, he will be following in the footsteps of his great grandfather, who served as a medic in the 6th Armored Division during World War II and earned a Silver Star for his efforts during the Battle of the Bulge.

“I’ve read through his letters, which was really interesting to hear the first hand account, and I’ve gone with my uncle who’s done [the radio program] Hometown Heroes,” Foshee said. “I’ve gone with him when he interviews vets, and he usually brings back their memoir books – 20 or 30 World War II memoirs that I like reading through. I’ve always been around those stories.”

For Hyatt, his military connection is his uncle, who served in the Air Force. Growing up he felt that military service could be in his future.

“I always thought it was cool,” Hyatt said. “Just straight up enlisting probably wasn’t the best thing for me, but I always had the idea that I just want to help people. And that’s a good way to help people.”

Getting to this point, however, was not without its difficulties, especially getting medically approved for West Point.

When he was in seventh grade, Hyatt suffered from a condition called pectus excavatum, which required surgery and took him out of commission for an extended period.

“My chest was caved in, and it was impacting my breathing and my heart. They stuck a metal bar into my chest to push out my sternum to give my lungs and my heart room to grow. It was pretty crazy, pretty invasive. I was in the hospital for five days. I could walk, but I couldn’t really support myself for about a month. And I was out of sports for three to four months. That bar was in for two and a half years,” Hyatt said.

“It was pretty tough trying to get back into the rhythm of things, but my family was there to support me. My friends were there visiting me in the hospital, so I made it through.”

Now that Hyatt is ready to fly across the country in a few weeks, he knows he’ll be ready to face whatever challenges present themselves.

“I’m pretty excited,” Hyatt said. “I think that I’m ready. I’ve been preparing for it. Mentally I’m feeling pretty confident, I’m feeling pretty good. I understand that they’re meant to break you there, so I just have to be able to push through all that and just never give up essentially.”

Hyatt has two subjects in mind that he would like to study at West Point: international affairs or law.

Whichever route he takes, he is eyeing the Judge Advocate General’s Corps – known as JAGs – when he starts his military service after graduation. JAGs provide legal services for their assigned command.

“I think it’s a dream come true to be able to serve my country, especially in the capacity that West Point will prepare me for,” Hyatt said. “Being able to lead other soldiers and follow in the footsteps of amazing people who’ve graduated from West Point, I think it’s amazing that I’ve been given this opportunity to take full advantage of it.”

Hyatt’s desire to serve the United States resonates with Foshee, who is looking to live a life of service to help others.

“I figured that out kind of early, just looking at the example of my dad, especially the way I want to live my life serving others,” Foshee said. “That’s how I want to define success. I knew I always had this passion for aerospace and flying. As soon as I heard about the Academy, it was like, ‘Yeah, that’s how I want to use it.’ The best way I think to use my passion to serve others would be to go serve in the Air Force.”