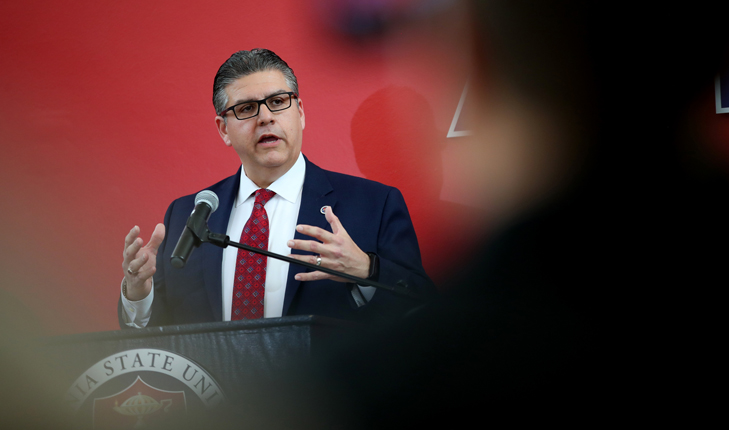 A February report from Gannett revealed that former Fresno State Vice President of Student Affairs Frank Lamas was the subject of several sexual harassment complaints, and Castro mishandled the complaints.

Castro, who had taken over the top job at the CSU system 13 months earlier, resigned a couple weeks later.

Lamas’ resignation only followed a formal Title IX complaint in 2019, the first investigation into complaints that started in 2014. That investigation found that Lamas was responsible for sexually harassing a woman.

Lamas settled with the CSU system and received $260,000, full retirement benefits and a letter of recommendation from Castro.

The CSU report, which was launched in March and released Thursday, found that Fresno State received nine reports about Lamas’ inappropriate conduct from 2014-2019.

“There were notice, recordkeeping and other deficiencies in the Campus’ responses across time,” the report reads. “Best practices were not always followed. More could have been done, such as conducting an earlier investigation in response to reports in 2014 or 2016.”

The report stated that campus administrators had good intentions in their response to the complaints but lacked experience, had heavy workloads and had poor documentation, which resulted in less aggressive and effective responses to reports.

“In particular, the President’s failure to more rigorously address reports of Lamas’ alleged misconduct as they surfaced was a notable factor that negatively impacted the effectiveness of the Campus’ responses to such reports,” the report reads.

The report stated that Castro consistently did not take any significant action and instead supported Lamas in the face of multiple allegations and confirmed findings of misconduct.

“Indeed, the President’s support continued even in the aftermath of the Settlement to the extent he provided a very positive retirement announcement and recommendation letter for Lamas that were inappropriate given the circumstances,” the report reads. “In short, the evidence reviewed reflects a blind spot the President had about Lamas that negatively influenced his response to Lamas’ behavior and execution of portions of the Settlement.”

Wegner found that Castro was aware of all reports against Lamas, except possibly one. She noted that Castro’s explanations to her – including him saying that he followed advice from other people and that no one complained about his responses to the complaints – “were not always credible.”

Castro disagreed with Wegner’s findings in an email to Gannett.

“I have learned many lessons from my handling of the Title IX matter involving Dr. Frank Lamas at Fresno State,” told Gannett. “These lessons will ensure that I am an even more effective leader in the future, including in the area of victims rights. I will share these lessons publicly to assist higher education leaders and governing board members across the nation who face similar personnel matters.”

Following the release of the report, CSU Interim Chancellor Jolene Koester thanked members of the Fresno State community for coming forward and sharing their experiences with Lamas.

“The report concluded that while the campus took action to explore and address each of the reports made, some responses substantially complied with applicable policy while others did not,” Koester said in a statement. “The report identified among several issues, the President’s failure to more rigorously address reports of Lamas’s alleged misconduct as a notable factor that negatively impacted the effectiveness of the campus’s responses.”