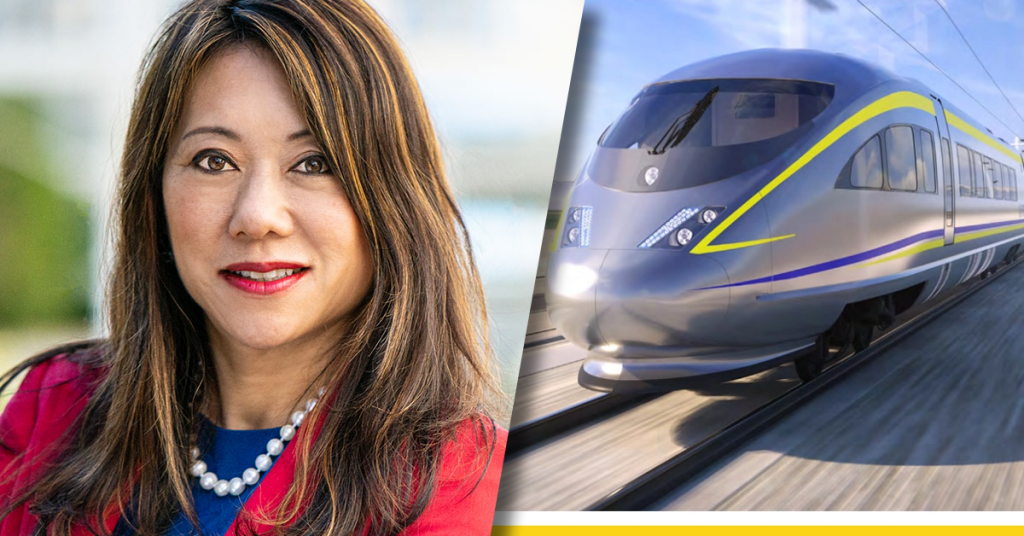 As the Biden administration and Congressional leaders attempt to wrangle votes for a massive infrastructure plan, one high-ranking California official has a word of warning when it comes to the most ambitious of proposals: high-speed rail.

California State Treasurer Fiona Ma warned leaders of the House and Senate Transportation committees to not engage in repeat efforts undertaken by the Obama administration and eschew bulky government-dominated operations such as the Golden State’s sputtering high-speed rail project.

In a letter, sent to the committees on Monday, Ma engaged in a tale of two states – Florida and California – to underscore the degrees of success and failure in tackling the bullet train.

The letter was first reported by Politico.

Brightline, which currently is working on a Victorville-to-Las Vegas route in the west, utilized pre-existing rights of way along with building along existing Florida highways to reduce costs.

“[M]eanwhile our trains in California have yet to leave the station after we have waited twice as long,” Ma said in her letter.

Ma noted that, no matter the political will to spend billions on an ambitious project such as nationwide bullet trains, the realities are far starker.

“While the sky seems to be the limit in terms of the amount Congress is willing to spend, I fear failure remains a real possibility,” Ma wrote. “Scores of billions may seem like a lot of money, but we know from our experience in California that actual construction ends up costing multitudes more than estimates anticipate.”

She pointed to the Obama administration’s issuance of $10.5 billion in funds for high-speed rail projects that netted no ridership from new rail lines a decade later.

“To be clear, a repeat effort that spends billions without getting any new lines operational after another decade will be the death of high-speed rail in America,” Ma wrote.

“There is simply no way the public will continue to support such an agenda without seeing tangible results—and after two hugely expensive bites at the apple, could you really blame them?”

In her letter she said pressed Congressional leaders to consider private-public partnerships (such as Brightline) as better paths to realizing functioning bullet trains, allow projects to use government grants to pay the credit-risk premiums for Federal railroad loans to lower the barrier to entry in obtaining financing (as billions in railroad loan funds go unused), and tripling the volume cap on private activity bonds to enable private actors to access greater capital tor realize projects.