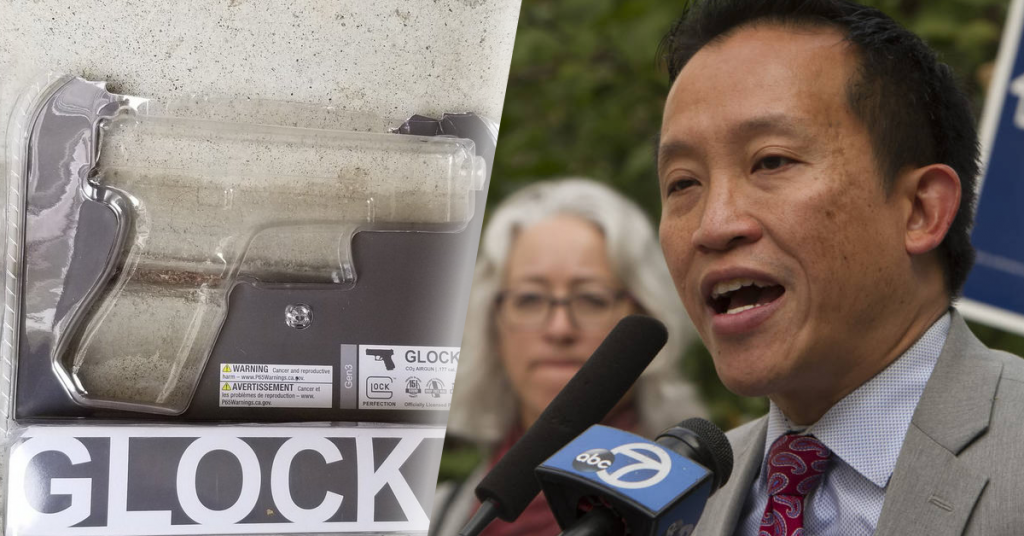 An attempt by Asm. David Chiu (D–San Francisco) to tie a piece of litter on the streets of his hometown to on-going gun violence in the city ended with a bit of egg on the legislator’s face.

Sunday, Chiu tweeted out a photo of the “discarded packaging of a semi-automatic on a leisurely weekend walk.”

Chiu included a photo of the packaging for a Glock 19 semi-automatic air-soft BB gun, which – though designed similar to the Glock 19 – is not a firearm.

The BB gun, though not pictured in Chiu’s tweet, is usually tipped with an orange muzzle to denote that it is not a firearm.

The packaging, however, does note that the gun was the airsoft version rather than the firearm.

Chiu caught considerable flak for the gaffe, as he is a leading proponent for gun control in California’s state legislature.

Beyond parody. The San Francisco Assemblyman freaking out about the discarded airsoft BB gun packaging is also the author of bullet-tracing legislation that has been criticized for not being technically feasible. pic.twitter.com/fLhPX8FLNs

It actually is a semi-automatic….air soft pistol.

This guy just doesn’t get it and keeps playing himself. He has no idea what the term “semi-automatic” even means yet wants to be one of the chief regulators of firearms. https://t.co/Eg8nbzRavR

The San Francisco lawmaker’s marquee achievement in Sacramento was authoring Assembly Bill 2847, which called on gun manufacturers to transition to a form of bullet tracing technology known as microstamping.

Despite being enacted by Gov. Gavin Newsom in 2020, the industry has repeatedly argued is technologically infeasible.

I deleted an earlier tweet that misidentified a Glock 19 air pistol. While not a semi-automatic, it's still disturbing to see remnants of a weapon that can cause injury, especially in an area where young kids play and while we are dealing with a surge of gun violence in SF.

It isn’t the first time a high-ranking Democrat in California has taken on gun issues, only to find himself the subject of jokes from the state’s gun enthusiasts.