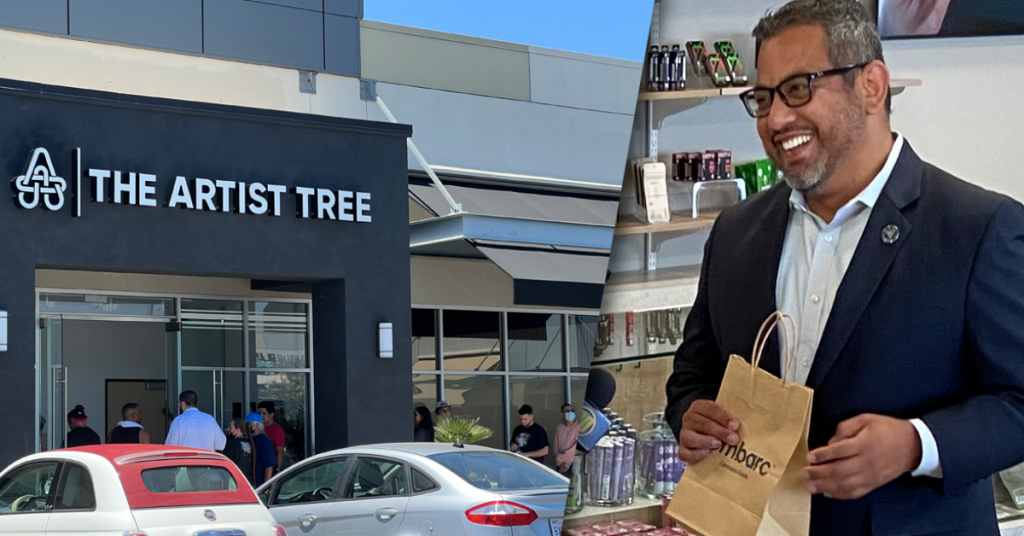 After years of planning and work to get the green light from the city, the first two retail cannabis dispensaries opened their doors in Fresno on Monday.

Embarc in central Fresno at E. Gettysburg Ave. and N. Blackstone Ave. and The Artist Tree in north Fresno at W. Nees Ave. and N. Palm Ave. both held soft openings Monday, signaling the beginning of an operation that is expected to produce millions of dollars in tax revenue for the city.

The dispensaries had a friendly race to make the first official cannabis sale in Fresno History.

Courtney Caron, legal counsel and team member of The Artist Tree, said the north Fresno dispensary made its first sale at 6:30 a.m. as the first in the city.

On the other hand, Embarc owner and CEO Lauren Carpenter contended that the central Fresno dispensary made the city’s very first sale at 6:20 a.m., which was to Fresno City Councilman Miguel Arias.

Regardless, Caron and Carpenter are friends and have traveled the path to opening day together as they both spent years moving their respective dispensaries through the city’s application process.

“We think it’s really important for cities that struggled to bring cannabis into their city to offer them a first class cannabis opportunity first. If you can show that this is what cannabis is supposed to look like in today’s market, then it brings some ease to the city’s stress about bringing cannabis to that market, and it also holds all the other operators to a slightly higher standard, which I think is wonderful,” Caron said.

Carpenter said, “I really like that both Artist Tree, in this rhetoric around this race between the two of us, I really like that it ended up being on the same day, because I think there’s something beautiful about really setting a tone in this community that cannabis can be community oriented and collaborative and positive and beneficial. And I’m excited to see what both of us can create and the goodwill we can engender as even more of the operators come online.”

Arias, as the publicized first official cannabis customer in city history, purchased edibles and balm, among other items.

Carpenter called his purchase a moment of pride and excitement for the Embarc team that has worked many hours to get to this point.

“I think it’s an important moment for this community, and what it signals is that cannabis is something that can be a benefit and that we can embrace and can be done responsibly when a city leader is comfortable coming in and being the first in the city to make a transaction,” Carpenter said. “That was a very cool moment.”

Embarc will make an impact on the local community through its community advisory committee that will have local volunteers who meet quarterly in part to allocate Embarc’s community investment fund, which totals one percent of the dispensary’s gross receipts.

“I think that’s important because it means when you’re shopping at Embarc you are directly supporting your community, not just through the funds that are going back to the city, but also because one percent of each of those purchases is going to support community causes,” Carpenter said.

Embarc currently has 25 employees, and Carpenter said that number will likely grow as the dispensary takes root in town. The Artist Tree currently employs 30 people.

Both dispensaries are part of lager chains. In addition to their Fresno shops, Embarc has locations in Alameda, Fairfield, Martinez and Tahoe while The Artist Tree has stores in West Hollywood, Beverly Hills, Los Angeles and Riverside.

One of the local connections that The Artist Tree promises to make is by promoting local artists at its dispensary, which houses an art gallery on the showroom alongside the cannabis products.

Every piece of art is for sale, Caron said, and the dispensary does not take a cut of the sale price and does not charge for gallery space.

“It’s all free of charge,” Caron said. “We have a curator that helps find the artist locally, and the Fresno Arts Council also has helped us locate artists.”

Artists interested in showcasing their art at The Artist Tree are welcome to reach out to the dispensary directly, Caron said.

In total, The Artist Tree will offer around 800 products once the dispensary is fully operational in a couple weeks.

“Anybody who is questionable about cannabis or wants to try cannabis but might be a little bit frightened, come in. Our staff is highly educated,” Caron said.

“We spend a lot of time teaching brand knowledge of each product that’s on the shelves to our staff, and I think it’s important that consumers understand that all the products here are safe and legal and tested, and that differentiates itself from the illegal market because those products have not been tested. So here you’re going to know exactly what’s in the cannabis that you’re purchasing, whereas if you buy something outside of the legal market you’re not going to have that guarantee.”