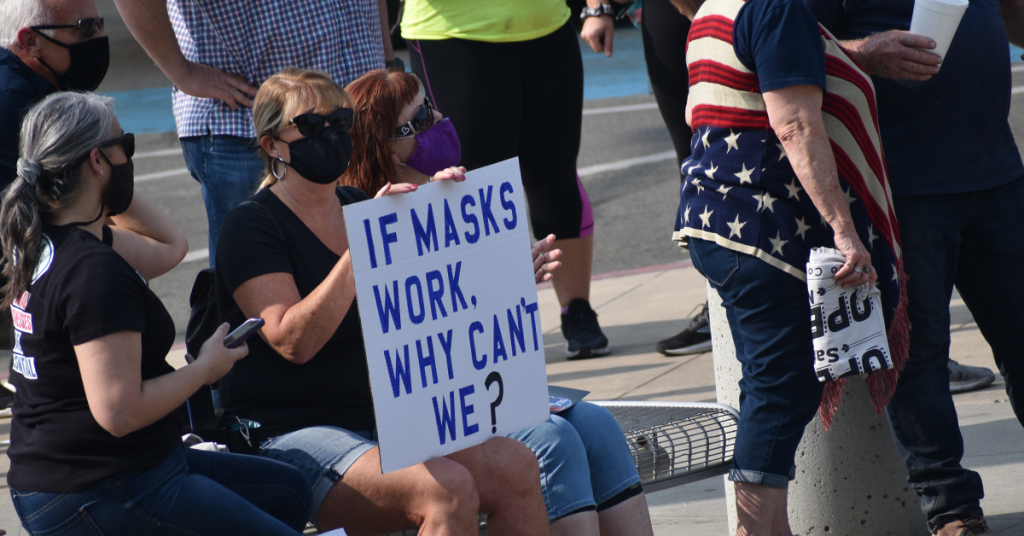 The message: Many business owners are fed up with the COVID-19 restrictions and closures, and they are going to reopen.

Lewis Everk, one of the rally’s organizers and the owner of Everk Hospitality – which runs some restaurants and nightclubs in Fresno – said he is reopening Oct. 1, along with many other restaurant and bar owners.

“We’re not here because we’re wanting to be rule-breakers and wanting to get our license taken away,” Everk said. “We’re here because there’s no other option. You’ve backed us into a corner.”

Since Fresno County is currently on the state’s purple COVID-19 tier – the most restrictive category – restaurants are not allowed to offer in-door dining, forcing them to set up seating outdoors.

If Everk and other restaurant owners who were at the event, such as Pismo’s Coastal Grill owner Dave Fansler, reopen their restaurants for indoor dining on Oct. 1, they’ll likely have the California Department of Alcoholic Beverage Control knocking on their doors threatening to take their licenses away.

Fansler was already cited by the ABC for operating indoors at Pismo’s Coastal Grill, forcing him out into the parking lot under a large tent.

The restaurateur called Fresno City Council member Garry Bredefeld a “lone soldier” in the fight to reopen businesses in the city with little to no support from the rest of the council.

“How hard is that to face those other idiot city councilmen every day with zero help,” Fansler said.

Last week, Bredefeld proposed four resolutions to the Council, which included reopening City Hall and reopening all businesses. Besides northwest Council member Mike Karbassi, the rest of the council voted to strip Bredefeld’s bills from the agenda.

“They took it off the agenda, wouldn’t discuss it, and they will tell you straight to your face they’re with you,” Bredefeld said. “They feel your pain, and they’re a bunch of liars. They support all of these authoritarian, radical and unconstitutional rules.”

Bredefeld criticized Gov. Gavin Newsom and said the policies in response to the COVID-19 pandemic have been “arbitrary.”

He specifically pointed to the zero-dollar bail policy, releasing thousands of inmates from county jails and the school closures.

“When I found out they were taking this bold move,” Brandau said sarcastically, “I thought to myself, ‘That reminds me, before long I’m going to have to write my letter to Santa Claus.’”

The two other politicians who spoke at the rally were Clovis Mayor Drew Bessinger and California Assemblyman Jim Patterson.

Erica Kious, a Fresno native and owner of eSalon in San Francisco, also spoke at the rally.

House Speaker Nancy Pelosi infamously visited Kious’ salon a few weeks ago – when local rules prohibited salons from operating – to get her hair done and was not wearing a mask in security footage that was leaked.

Pelosi called the situation a “setup.”

“I don’t consider myself a hero,” Kious said. “I’m just a mother with two children trying to support my family. Being shutdown for six months is just way too long. We were supposed to open midsummer. And a lot of us, restaurant workers, salon owners, spent almost the last of our money to reopen our businesses safely and got denied. So six months had gone by. And in San Francisco I’d heard nothing from the mayor, supervisors, not a word.

“So when I saw the footage on my security cameras, which was not a setup – that was absolutely not a setup. I’ve had those cameras for years. But when I actually saw that [Pelosi] had come in and walked through the reception area with no mask, I lost it. If she feels safe enough to be in there, then why can’t I have clients in there, right?”

Kious said she had to shut down her salon again after the incident.