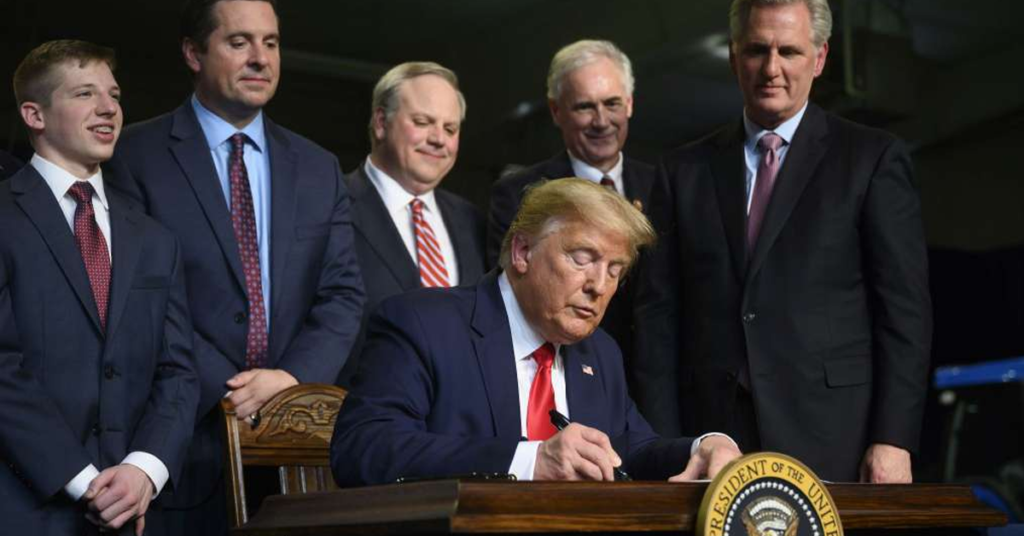 President Donald Trump’s quick visit to Bakersfield two weeks ago capped a years-long effort to send more water to the region and into Southern California from the Sacramento-San Joaquin Delta.

As written before, the Bakersfield rally and signing also served as a watershed moment in a decade-long push to restore water flow to the state’s breadbasket following legal sparring between environmentalists, major water users, and irrigated agriculture.

And, it’s important to note, that Trump’s visit itself didn’t authorize the new environmental rules governing water exports from the Delta. That was done by high-level executives with the U.S. Bureau of Reclamation one day prior.

Instead, Trump came to sign a new memo to kickoff the next phase of action by the Federal government on California water infrastructure.

So what’s happened since Trump made his visit to the Valley? More than you can imagine.

Minutes before Trump took the stage, the State of California filed a lawsuit seeking to block implementation of the biological opinions – or environmental guidelines – governing the flow of water from the Delta via the Central Valley Project.

The suit followed months of telegraphing by Gov. Gavin Newsom and his administration. Just one day before the suit was filed, Secretary of the Interior David Bernhardt was issuing prebuttals to a lawsuit from the state.

On Thursday, the U.S. Bureau of Reclamation delivered its own salvo to the Newsom administration – it was pushing forward pre-construction work on raising Shasta Dam.

The Dam, a large piece of storage infrastructure within the Central Valley Project, has been high on the target list for expansion.

A push to raise the dam was made possible by the same law that delivered new biological opinions – the Water Infrastructure Improvements for the Nation (WIIN) Act, approved in the waning days of the Obama administration.

Under the law, Congress appropriated $20 million in 2018 as seed funding to raise the dam by 18.5 feet. The total price tag of the raise project is tabbed at more than $1 billion.

In order to complete the project, the Feds would need a state or local partner to share the cost of construction.

One local agency – Westlands Water District – was willing to fund a necessary environmental study into a potential raise of the dam.

The law prohibits action that would adversely affect the free-flow of the neighboring McCloud River.

Westlands argued that Becerra had a chicken-egg dilemma brewing: the only way to know if a dam raise would affect the river would be to study its environmental impact.

Ultimately, an appeals court sided with Becerra in September and Westlands abandoned its study.

The Bureau of Reclamation subtly announced its work to move the dam raise project via a tweet:

Officials with the agency cited their renewed push for Shasta Dam was launched by the memo signed during Trump’s bakersfield visit.

“Enlarging Shasta Dam would provide crucial additional water for a state facing repeated cycles of drought. It would directly benefit California’s families, farms and communities while providing extra water for environmental needs,” he added. “As such, Reclamation is continuing to move forward with pre-construction work and will keep working with all stakeholders to find solutions to California’s water supply challenges.”

And as for local partners, Reclamation isn’t taking that effort lying down, Hunt said.

“Reclamation is engaging various stakeholders, including landowners, and non-government organizations to look at all options for cost-sharing partners to help support this project to improve California’s future,” he said.

It’s worth noting that Westlands itself is a state agency.

Looking at the cup half full

Tuesday, the Bureau of Reclamation announced that Valley farmers would see greatly reduced allocations of water in 2020.

For westside San Joaquin Valley farmers, they would see merely allocations at 15 percent of their contracted amount.

Despite major changes to the guidelines governing water pumping to the San Joaquin Valley, no policy could serve as an adequate substitute for rainfall.

And while 2019 served as a significantly wet year, 2020 has been far less forgiving for farmers and water users.

However, major water users seemed to sing the same tune: despite the lack of rainfall in 2020, wetter years within this new legal environment will translate to far greater access to water.

Meanwhile, Westlands became the first water district to convert its temporary, short-term contract for water with the U.S. Bureau of Reclamation to a permanent repayment contract.

The district signed its agreement with Reclamation on Friday.

Under temporary water service agreements, water users pay a single fee per acre-foot of water used to repay the Federal government for construction costs associated with the Central Valley Project along with its costs for maintaining and operating the project.

Westlands has negotiated for 1.15 million acre-feet of water annually from the Central Valley Project under the draft permanent contract.

Since the the conversion agreement was drafted in November, the district has paid roughly $118 million if its existing obligations to the Federal government.

Terms of the Westlands agreement, district general manager Tom Birmingham said, mirror those issued to water users within the Friant division of the Central Valley Project following the passage of the San Joaquin River Restoration Settlement Act of 2009.

As said earlier, California has seen a flurry of water activity since