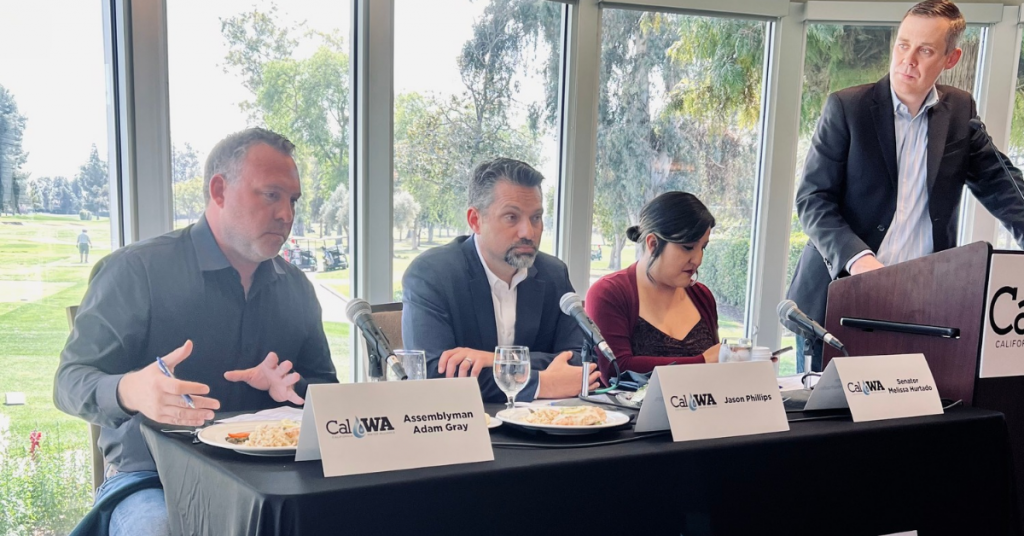 The San Joaquin Valley’s future as the agricultural heartbeat of the United States and the world faces an existential crisis, an assembled group of water policymakers and state lawmakers warned Friday.

Following a pandemic break, the Fresno-based California Water Alliance hosted its second-ever annual water forum, bringing in more than 100 attendees from the farming, water, and government sectors to dive into a wide-ranging discussion covering some of the most hotly-debated topics affecting the region’s water supply.

As California enters its second bone-dry year of drought, a growing exasperation at the lack of long-range strategic planning to avoid the boom-and-bust cycle of the state’s water woes emerged.

Before the panel spoke, attendees were treated to a sneak peek of an upcoming documentary by director and producer Jim Thebaut, following up his 2019 film California’s Watershed.

For those intimately aware of California’s political climate surrounding water, the preview of the film was certainly a palate cleanser given its subjects.

Marcus’ appearance earned more than a few grumbles from the audience.

Her tenure as the chair of the state water regulatory body was marked in controversy, particualrly over the Bay-Delta Plan, which initially called for up to 50 percent unimpaired flows of water from the San Joaquin River and its tributaries into the the Sacramento-San Joaquin Delta and out to the Pacific, angering Valley water users in the process.

The anger over the one-sided plan reached a fever-pitch and led to her ouster by Gov. Gavin Newsom in 2019.

Panelists honed in on the top target for affecting change in the condition of the state’s water battles: bureaucrats.

They warned farmers that California water wars are a 24/7 battle and much of Valley agriculture has missed out on opportunities to press state and Federal bureaucrats to develop regulations helpful for the region’s top industry.

Patterson bemoaned how California’s Department of Water Resources has handled supplies in wet years and failed to prepare for the eventual dry years.

“My concern is the manner in which these hydrological systems are operated. They’re being operated almost as if they don’t exist,” the Fresno Republican said. “We missed great opportunities in 2017 and 2019 to build up our reservoirs.”

“Our fight is with the regulators and the zealots.”

Gray, a Merced lawmaker who is deep into a run for Congress in the newly-drawn 13th Congressional district, told the assembled audience it was time to “go on offense.”

He announced his intention to file a request with California’s State Auditor to audit the Department of Water Resources’ missed forecasts for water supplies, which was off-target by an estimated 700,000 acre-feet compared to other agencies.

The decision by the Biden administration to roll back environmental rules issued by the Trump administration in 2019 governing the flow of water from the Sacramento-San Joaquin Delta to the San Joaquin Valley and Southern California was, unsurprisingly, met with heavy criticism.

Phillips, the Friant Water Authority chief, noted that the biological opinions have become a critical tool of environmental advocates to bludgeon water supplies directed to purposes other than habitat restoration or environmental use.

He noted that the 2019 biological opinions for the operation of California’s two premier water systems – the Central Valley Project and State Water Project – represented a marked improvement from the same regulations tendered a decade before.

However, wrestling with environmental lobbies left some items on farmers’ wishlist unresolved – even with the Trump administration helming the update.

“The biological opinions of 2019, I would have loved to have gotten those more in our favor, but it’s impossible with bureaucrats,” Phillips added. “But I think they did a fair job in the Trump administration to have this based on some amount of science.”

Phillips argued that the under-development Biden administration regulations are being “made up out of thin air” with respect to scientific data, as the 2019 biological opinions represented the cutting edge of scientific data for the two water projects

Hurtado echoed Phillips’ concerns, noting that the mantra of “following the science” has emerged as being selectively utilized in the Golden State.

The slow-rolling and ever-looming implementation of California’s Sustainable Groundwater Management Act, a 2014 law imposing strict requirements on groundwater pumping, was a source of considerable derision amongst the panelists.

The law requires areas of the Golden State that have critically-overdrafted the aquifer to organize into a new form of government – dubbed groundwater sustainability agency (or GSA) – who are tasked with developing plans to establish and enforce the amount of water that can be pumped from the ground.

The law is projected to force San Joaquin Valley farmers to fallow an estimated 1 million acres of productive farmland.

“SGMA was poorly constructed from the get-go,” Gray said. “When it was voted on in 2014 in the Legislature, every member of the San Joaquin Valley delegation – of either party – voted against it. And that just tells you that it didn’t have any balance at all.”

“We basically realigned all our bills and handed things over to local government and forgot to send them the money,” Gray said, explaining the concept.

“The same situation is here with SGMA. If SGMA was being complemented with those investments in water infrastructure then there’s a way to get full. The thing’s designed to just choke everybody off.”

“The [Groundwater Sustainability Agencies] are not on track to have their plans ready and I’ll tell you why. If you have 800 stranded on an island and only have enough water to keep 500 alive, how are they going to come up with a plan for 800 people? They can’t, unless they throw 300 off,” the Friant Water chief said.

“And they aren’t doing that, and I can’t blame them. So the answer is to bring in more water. We have to add more infrastructure to capture water, to store water, to get it into the ground, and we need to be able to move more water from the Delta so the GSAs even have a fighting chance.”

Circling back, Gray managed to tie-in the overarching theme of frustration with California’s water bureaucracy with its impact on SGMA implementation.

“I was working with an organization out of Stanford University that has the technology to map the Valley floor and find the optimal recharge locations. That’s an obvious no-brainer that we ought to be doing,” Gray said.

“I got the $100 million in the budget for it and it goes over to [the Department of Water Resources.] Now I can’t get DWR to move the money to the actual groups that are working with Stanford to do the work. That’s the kind of nonsense that we see on a daily basis.”