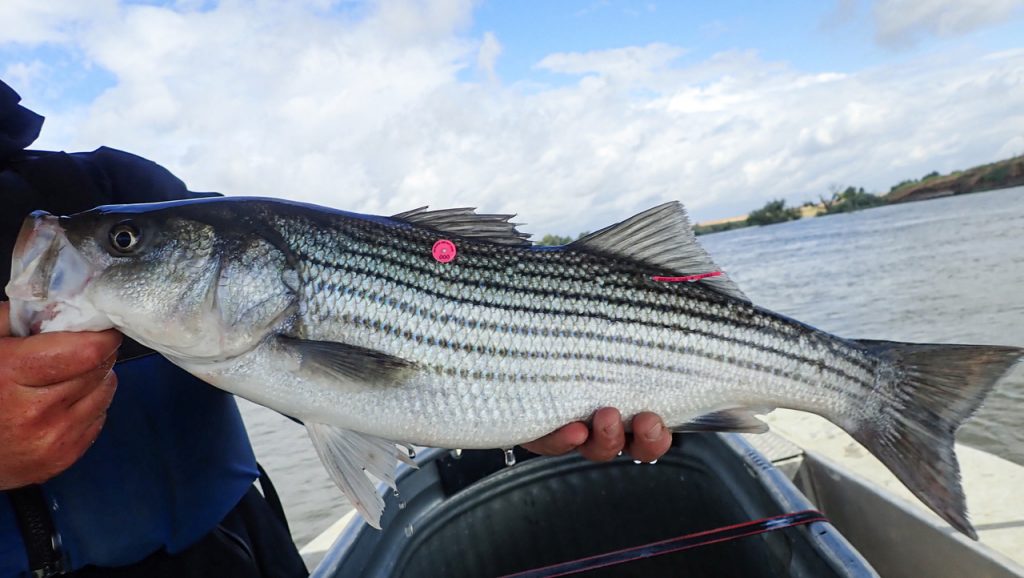 In this already long, hot summer there is yet another matter that indirectly can impact Valley agriculture. Maybe not right away but in the long march the population between predator and prey in the San Joaquin/Sacramento Delta impacts anyone from the Oregon boarder to Mexico, the Pacific Coast to Nevada who drinks water and eats food grown with water.

The rest of you need not finish this article.

This is known as a slot limit.

This proposal is brought to you by the Nor-Cal Guides & Sportsmen’s Association.

A press release from the association says, “The stated goal [of Nor-Cal] is to protect the species by increasing the minimum length to allow more fish to mature and successfully spawn prior to harvest and to protect the larger fish that tend to be the most prolific spawners and are becoming increasingly rare in the fishery.”

Is This a Good Idea?

Striped bass are not native to California but they’ve been here for some time.

They were introduced in 1879 at Martinez along the Carquinez Straight between the Delta and the San Francisco Bay.

Within a very short time they became established. They are anadromous, meaning they are born in fresh water and spend part of their life cycle in the ocean. Salmon are another anadromous fish native to California. As are steelhead and cutthroat trout and white and green sturgeon.

The striped bass or striper must be a popular game fish. More than 17,000 survey responses have been received. James Stone, President of Nor-Cal Guides believes so. Nor-Cal wants more striped bass. On a telephone interview he said in 1970 there were 20 million people in California and 2.2 million fishing licenses issued. Stone observed California’s water infrastructure isn’t keeping up with its population growth. He said in 2021with 40 million people only 1.2 million fishing licenses were issued.

The CDFW website lists annual resident sport fishing licenses cost $54.00 each. There’s a nonresident license for $145.80 and reduced fees from $8.24 to zero for disabled veterans, seniors, low income Native Americans and developmentally disabled. There are also one day, two day and 10 day licenses for nonresidents.

There are also lifetime fishing licenses ranging from $402 to $972.50 decreasing with age. Determining the state’s income from fishing licenses would be difficult to pinpoint without more specific data. And that data is not so easy to come by. While fishing data is separated by commercial and recreational the ocean and freshwater categories are lumped together. Other statistics show boating/fishing as one category.

Annual licenses at $54 times 1.2 million sold equals $64,800,000. While California’s High on Speed Rail uses an economic multiplier of 17 point something to describe itself, I choose the more conservative times three for ag output.

In an effort to err on the side of caution an economic multiplier of four for the recreational fishing industry times $64.8 million equals $259.2 million. Not an insignificant number, especially to those who sell bass boats, graphite rods, fishing trips, bait and floppy canvas hats for a living. In comparison the 2020 crop report for Fresno County alone puts the farmgate value of agriculture at $7.9 billion. Times three equals $23.7 billion.

Is There a Problem?

Farms and cities in California depend on water pumped south from the Delta. One of the problems with pumping water from the Delta is endangered species. The pumps are shut down during critical times of the year for both fish and crops. So far both the fish and the farm-based livelihoods in the San Joaquin Valley have been experiencing loss.

Salmon and smelt are species of fish imperiled by predation. The circle of life. But what if the Delta has been so altered that the predation by non-native species is high enough to cause an irreversible decline in a species? The number of non-native species in the Delta is higher than the native species. The size of the Delta has been reduced by 70 percent or more due to development. The amount of aquatic vegetation has increased and altered the remaining habitat. Rip rap, broken concrete slabs line the banks of many in Delta channels to protect against erosion creating an ideal place for predators and a very unfriendly place for out-migrating salmon.

FishBio is a fisheries and environmental consulting company headquartered in Oakdale with offices in Chico, Santa Cruz, and Laos.

The company has been looking at predation as part of the river and Delta journey for salmon. They guided me to a couple of reports. A 2010 study shows smaller striped bass are better at capturing out-migrating salmon than larger, older fish. A 2012 study indicates 96 percent of the out-migrating salmon form the Tuolumne River were lost to predation.

Another finding that needs much more follow up is the decoupling of precipitation and fish populations. The out-migrating salmon during the very dry year if 2015 were more prolific than the salmon from the much wetter 2017 year. Why this occurred has yet to be determined.

Stone from Nor-Cal says these studies were paid for by those who stand to benefit from finding stripe bass to be a major predatory problem and reducing their numbers an easy fix. That got me thinking about political campaigns. When my favored candidate receives an endorsement, that’s free speech in action. When my candidate’s opponent receives an endorsement that’s special interest on display. The studies on predation were funded by water contractors whose farms depend on Delta exports. But unlike political motivations, studies can be peer reviewed and how conclusions were arrived at evaluated. Nor-Cal asked for shot at changing the limit on stripe bass from the government and got it. The members of that organization believe they will financially benefit from tighter take limits. Water exporters had to fund the predation studies themselves.

One thing Stone and ag interests agree on is how water is treated in California. He said there is a political battle to control water.

“We’re not against sharing water,” said Stone. “Our goal is to educate the truth south of the Sacramento. There’s not enough water for 40 million people, agriculture and fish.”

Another group that stands to win or lose in how stripe bass are impacting the Delta are commercial salmon fishermen. A spokesman for the Pacific Coast Federation of Fishermen’s Association said they had no comment at this time and would have to weigh carefully if increasing the predatory stripe bass would be good for their membership before taking a position.

The Fish & Game Commission has the authority to set take limits on striped bass. After the August 24th meeting there will be a comment period before the CDFW biologists take their opinions to the Commission at an upcoming meeting.

Hunters and fishermen have real world experience. So do farmers and ranchers. If you care about Delta exports you should be paying attention to what’s happening with striped bass.