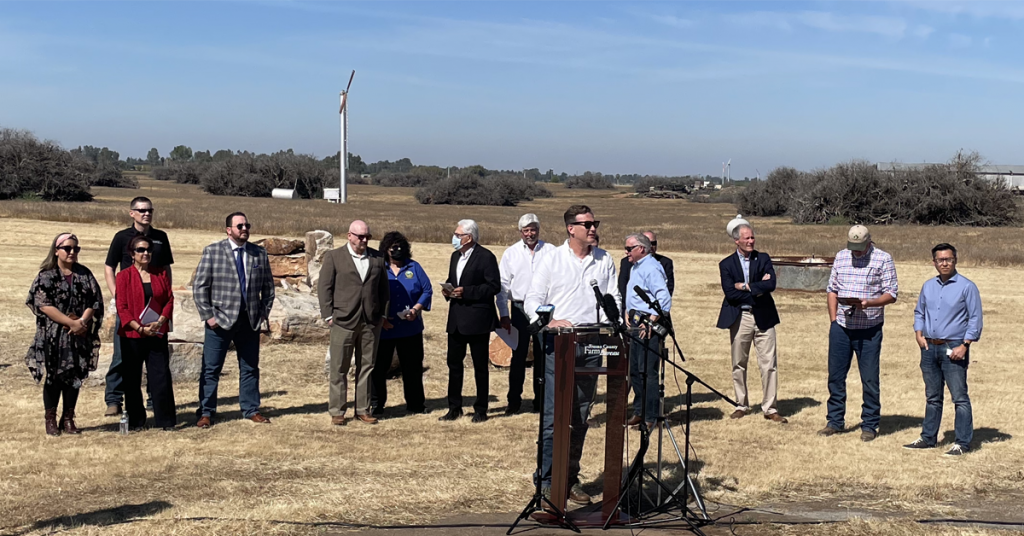 The campaign to convince Gov. Gavin Newsom to declare a statewide drought emergency gained considerable ground on Friday as county supervisors from five Valley counties joined a bipartisan cadre of state legislators to rally the cause in Clovis on Friday.

Standing in Harlan Ranch, State Sen. Andreas Borgeas (R–Fresno) led the booming, bipartisan coalition of elected officials at the state and local level hoping to capture the initiative and serve as a tipping point to convince push Newsom to change course amid the state’s ever-worsening drought.

“While the Governor stated that he is disinclined – so far – to issue a statewide emergency the prevailing science and data demonstrate the urgency of this very moment,” Borgeas said.

The chairs of five San Joaquin Valley County boards of Supervisors announced local emergency declarations that they had either already approved or were set for approval in the next week.

In appealing to Newsom, Tulare County Supervisor Amy Shuklian and Asm. Devon Mathis (R–Visalia) pointed to the environmental and economic devastation wrought on the eastern portion of Porterville, where water wells dried up amid the last drought.

Thanks to national news coverage of the town, Porterville earned the nickname “The Town with No Water.”

“We are still recovering from the last drought,” Mathis said. “We have places in the San Joaquin Valley where we have third-world conditions due to water currently.”

“We’ve seen our water deliveries curtail,” Madera County Supervisor Rob Poythress said, acknowledging a local emergency edict issued by the county’s board. “We’re not drought deniers, we can see it with our own eyes.”

Sen. Anna Caballero (D–Salinas), one of a dozen members of the Valley legislative delegation to call on Newsom to declare an emergency via a letter sent in early April.

“We persist in pushing the Governor to take this action because what we know is it gives us an opportunity to start right now – not waiting five months or six months or two months – right now to make the adjustments that we need to make in order to ensure that there is water flowing to the Valley,” Caballero said.

“The pandemic really caused devastation in our communities and we continued to provide the world with food,” she added. “When you went to the grocery stores, you didn’t see shortages of fresh fruit and vegetables because of this Valley. And if you want to provide the fresh food, you need to provide the water that is tremendously necessary.”

Sen. Melissa Hurtado (D–Fresno) also joined the cause on Friday, her first public comments on the drought subject since legislators began lobbying Newsom.

“Our actions will determine whether we actually enter a food crisis,” Hurtado said. “We’ve got to do everything we can to avoid that. We cannot repeat the mistakes we made in 1974 when we entered into a global food crisis – and unfortunately we’re making those same mistakes.”

“The Central Valley is essential and water is precious and essential as well,” Fong said. “Our water system was designed to help our state weather four-to-five year drought. But because of state regulations, the effectiveness has been curtailed. We are barely surviving one year of drought.

“A world-class water storage and conveyance system that we’ve built over the years – over the decades – in California has been brought to its knees due to overregulation and misplaced priorities.”

Patterson noted that Newsom has regularly attempted to shatter preconceived notions of his opinion of the Central Valley.

“I’ve made this point from day one: I’m not some guy from San Francisco that doesn’t give a damn about the Valley,” Newsom said during a Kern County visit in February.

“Caring about the Valley means he has to listen, he has to understand, and issue the declaration, Patterson said.