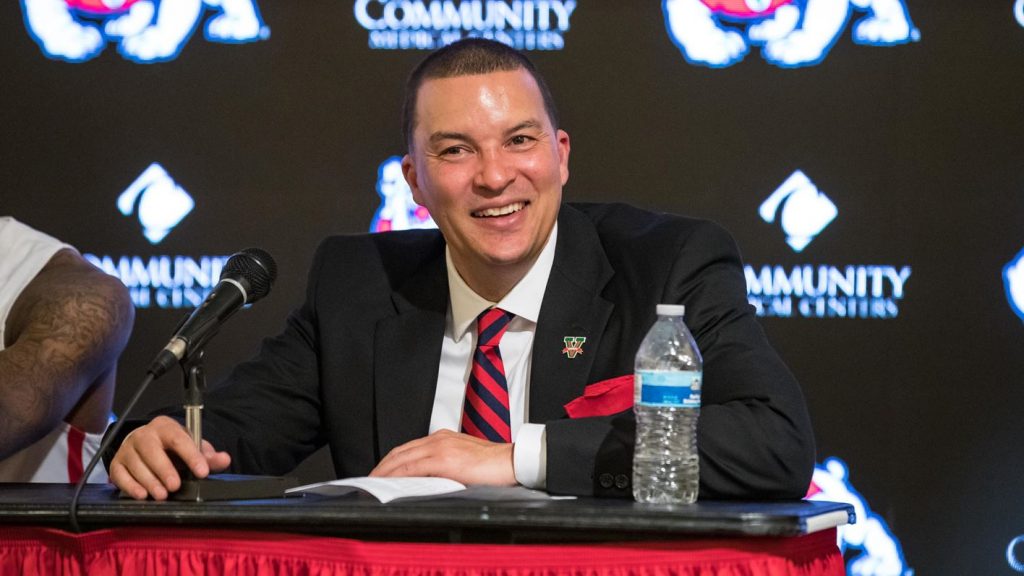 As Fresno State football is currently sitting out due to COVID-19, Bulldogs men’s basketball weathered the pandemic earlier in the fall and is healthy and ready to go for the season-opener on Wednesday.

Fresno State will not allow any fans inside the Save Mart Center to cheer on the ‘Dogs when they take on William Jessup University at 3 p.m., per state COVID-19 restrictions. But fans will be able to watch locally over the air on MyTV53 or online at the Mountain West Network.

Head coach Justin Hutson is entering his third year with very few returning players from an 11-19 team a year ago. Sophomore forward Orlando Robinson is the only returning player and is likely set to be one of the top players in the Mountain West.

Besides Robinson, the only players to receive any significant playing time last year that will suit up for the Bulldogs again are forward Anthony Holland and guard Jordan Campbell. With 10 new players entering the program, Hutson faces the challenge of coaching an inexperienced and young team.

Hutson also had to deal with a team that is behind in the practice schedule. The Bulldogs missed 28 days due to two 14-day quarantine periods after members of the team tested positive for COVID-19 in the fall.

The head coach met with local reporters over Zoom Monday to discuss the upcoming season. Here is what he had to say:

On the challenge of having 10 new players

JH: “The fortunate thing is we’ve got some hard-working guys. They want to be here. They want to work. They want to learn. The challenge is trying to keep it simple, and get you in shape while doing that. Trying to put things in and teach, but also playing and staying in rhythm. If I’m standing around teaching then we’re not playing basketball, and we’re out of rhythm. If we’re just playing basketball the whole time, then I’m not teaching anything to 10 new guys. So it’s a constant challenge. It’s much better when you have a lot of returners, because now you can pick up where you left off. But when it’s new like this, it’s been a heck of a challenge. But I am happy with the guys that we have.”

JH: “He knows what he’s doing. He’s continuing to grow. He is a young sophomore now, but experienced sophomore. He’s experienced. He played a lot of minutes, he scored points, he defended. He’s doing much better. He didn’t have a lot of workout because of COVID. He didn’t have a chance to really get into the weight room all spring all summer because of these COVID things, but he is stronger. He didn’t have a great chance to get into the gym and shoot all the time because of COVID, but he shoots it better. Orlando’s a hard worker, so I think you’re going to see big things out of this this year.”

On what he feels is certain with this team this year

JH: “Not much. I think Orlando’s going to be a pretty good certainty. I think Anthony Holland will be solid. I think we’ve got some good players. There’s no question about that. I’m really happy with the guys and how hard they’re working. Usually I would like to say we’re going to defend and we’re going to really play hard. I think that would be a question – I would say it doesn’t matter how many new guys I have. But when you’re not on the practice floor it’s hard to develop those habits. So I think eventually you’re going to see a team out there that’s really going to defend the ball. I think Orlando’s going to be really solid for us. I like our three new guards. They’re very talented. They have some shooting and some athleticism. But right now I can’t tell you for certain much that you’re going to see on Wednesday, besides if they’re not trying hard they’re going to come out of the game.”

JH: “A lot of them have, but it’s been in different days. There’s some days where Isaiah Hill is just great with the ball, making great decisions, making shots at the point, and you’re saying, ‘Wow.’ There’s some days Kyle Harding is really good getting downhill. He’s quick, he’s strong. Devin Gage has nice savviness in the backcourt, there’s some times you say, ‘Wow, I can see some of the experience that he has.’ Anthony Holland, there’s days where he doesn’t miss a shot. Braxton Meah inside is very athletic, so sometimes he dominates the practice being inside at the rim. But what you’re looking for is some consistency, and in an inconsistent world we haven’t consistently practiced. They haven’t consistently been around me. So that’s what we’re striving for. Let’s be consistent at the base things that we’re doing, and let’s continue to get better, because I like our talent.”

JH: “They don’t. I believe the first time we got here, we were supposed to start workouts on Sep. 21, but for some hangup we couldn’t start until the 29th. And when we started on the 29th we had a young man with COVID. I believe the problem was they were trying to hang out and get to know each other. So now eleven of the guys had to sit out. That part is tough, because you have all these new guys and you’re going to usually have functions at my house. And those things don’t guarantee success on the floor. I’ve had teams that have hung out all the time, and it doesn’t guarantee that they’re going to be close on the floor. Those are two separate things. But they do like to get to know each other and talk on their own terms and be able to see their own dreams and where they come from. So we’ve had to do that in our little three hour block of practice more. I talk a lot more to them in our little three hour block of practice to try to get to know each other.”

JH: “I know they’re always a well-coached team. I know that. They’re well-coached, so it’s going to be a good chance to get out and play continuous basketball. That part, I wish I would have done a little bit more. We’ve had some injuries. We’ve been in and out. So it will be a good chance for us to get up and play in five, six minute blocks.”

On playing without any fans

On what he is thankful for

JH: “Health. Health for my family, for my basketball family and all my good friends. It’s all about health right now. I just had a good colleague and friend of mine passed with a heart attack, Anthony Stewart, who was a really good friend of mine. He was the head coach at Tennessee-Martin. We actually played them my first year here at home. I believe he just died at age 50. Those things always remind you you have to be thankful for what you have.”