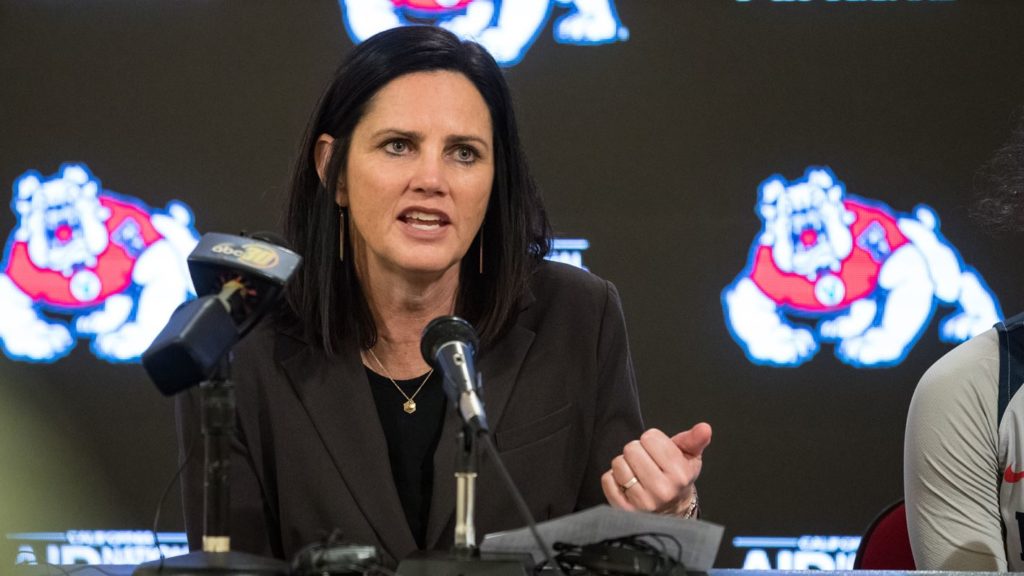 On Sunday, Fresno State women’s basketball head coach Jaime White had just come off an emotional win at Boise State the night before when she heard the tragic news about former Lakers Star Kobe Bryant.

Bryant, his 13-year old daughter Gianna and seven others died in a helicopter crash Sunday morning in Calabasas, California.

“Hard to believe it,” White said. “Like I said to my assistants, I couldn’t breathe. I can’t kind of breathe right now. But just so shocking, and such a young age and all of those things. And just really reminds you that life is fragile and to cherish every moment that you have with your friends and your family – and take care of yourself. A hard reminder, but a good reminder for everyone.”

Because Bryant was one of the most successful players in NBA history, the tragedy hit close to home and felt like a personal loss for White and the Bulldogs.

“Such a devastating, sad incident,” White said. “Kobe, because of his emphasis in the women’s game now with his daughter playing on the circuit, we’ve seen him at gyms. We’ve seen his daughter. It’s so close to home. It was a very emotional weekend. We beat Boise, and then that happened.

“And just our kids grew up with Kobe. I did too, but our kids really grew up idolizing him. You can see that he’s touched the world in more than one way and it’s just so sad. But his legend will live forever.”

Freshman guard Haley Cavinder – who led the Bulldogs in the comeback win with 25 points – was on her way to the grocery store with her twin sister Hanna and other teammates when she heard about Bryant’s passing.

“I think it’s just crazy,” Cavinder said. “I mean, you see something, and you’re like, ‘I don’t want to believe this. Can this not be real?’ Because, just as a person, I think Kobe inspired so many people, not just basketball wise. And then to hear about his daughter, it’s devastating.”

White had a chance on Monday to talk to the team about Bryant.

“You could tell it was hard on all of them and a little bit shocking. When you’re young, you think people live forever, and that’s hard. And it was hard to have it be so sudden and devastating, but I think our kids realize too you’ve got to cherish the time that you have, and we’re all human. You see them on TV, they have families – they’re normal too. Unfortunate situation, hopefully we can all take something from it and live a better life because of it.”

Amid the mourning for Bryant, the Bulldogs have to pull together and face Air Force Wednesday evening at the Save Mart Center in their effort to stay undefeated in the conference. Even though Air Force is currently sitting in 10th place in the Mountain West – out of 11 teams – the Falcons will be a challenging opponent.

“They’re tough,” White said. “They’re always tough. They’re going to defend you. They’re kind of pesky, and they’re going to be close to the ball. Our girls are going to have to take care of the ball again. I do think rebounding is important. They lead the league in offensive rebounds, so we’ve got to make sure we block out. And then offensively we’ve got to take care of the ball and make sure we get shots and not turnovers.”

The team hasn’t made any plans yet to honor Bryant at the game, White said, but she is sure that they will through different ideas.

Here is more of what White, Haley Cavinder and junior guard Aly Gamez said to the media on Tuesday:

White on the Bulldogs having multiple comeback games:

“The good news is I don’t have to be too emotional when we’re down knowing that we can come back. One thing is it takes a little bit to get used to the game and knock down some shots. When we’re on the road it’s tough. You don’t know if you’re going to be on, or if those shots are going to fall, or what kind of shots you’re going to get. So I just felt like our kids got comfortable late. They started believing like, ‘OK, here we go. We can do this.’ They realize there were openings for their shots. We’re getting some rebounds. I thought we executed really well late. I thought we turned some good rebounds – especially Haley got some good rebounds and went coast to coast, which really opened up the floor for us, and I thought the kids just denied being beat.”

White on Haley Cavinder and Gamez’s performance against Boise State:

“[Cavinder’s] performance was big time, and it wasn’t just offensive. She got those rebounds. She was able to bring the ball down. She saw the floor well, not only shooting but assisting on shots and creating plays that were there. I thought Aly had a big play down the stretch where she took the charge. She also had a steal right before halftime in the press that helped us. And so I was pleased with their mentality. I thought they were very mature in a way. They didn’t let that lead rattle them. In the past, I think against a Boise type team, we’ve let that rattle us.”

“He didn’t care if it was women’s or men’s, he was just going to support it. And then to have his daughter, she was really good at basketball and was going to be a really good basketball player someday in college.”

“I just know they play hard. Every single team, since we’re the No. 1 team, is going to come and give us their best, and we just have to treat them like they’re the No. 1 seed. So just prepare like we prepare for every other team, and I think we’ll get the job done.”

Gamez on the Boise State win:

“It was huge. Since I’ve been here as a freshman, we have yet to beat them. So our mindset going into that game, we wanted to win one. And we went in, faced a lot of adversity, but we got one. So that was a huge win for us.”

Gamez on the difference from her first to years to this season:

“I think we have more pieces. Of course we have a good core, but also people coming off the bench. We have a lot of people who can come off and produce for us – score, rebound, defend, so I think it all is put together well.”

Gamez on her leadership and helping the freshmen:

“I’ve been here three years obviously, so I don’t really get frazzled easily, and sometimes they can get a little bit emotional, I guess. So I think it’s important to me to be able to bring them together and tell them it’s OK. It’s no big deal. We have 30 minutes left in the game. That’s a lot of time left. Just those small things.”