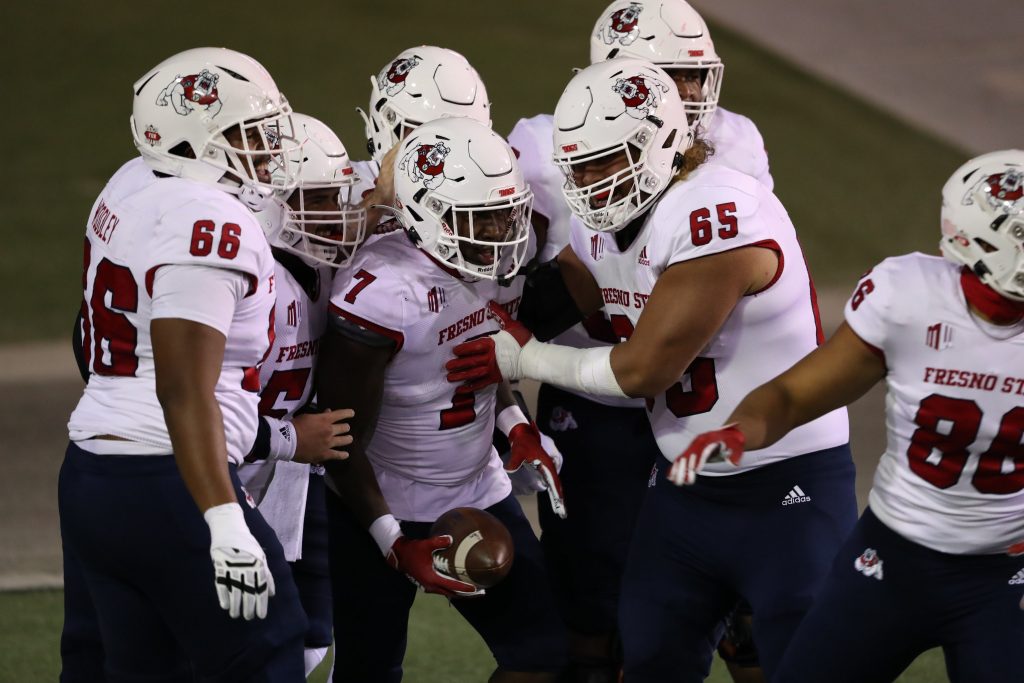 Early on it looked like Fresno State was flying high and would pull away from New Mexico to finish the season on a high note.

But the Bulldogs could not overcome middling offensive line play and a defense that looked lost for the majority of the game as they lost 49-39 to the Lobos.

Fresno State quarterback Jake Haener was on the run all night, rarely finding himself with a clean pocket to work out of as he was sacked 8 times. New Mexico had 6 total sacks all season.

After the game, Fresno State head coach Kalen DeBoer chalked up the offensive line struggles to a simple lack up execution and some communication errors.

“You see some things where we just wore down up front a little bit,” DeBoer said. “I think that happened last week, and I think it happened again tonight. I thought most of the time Jake really had to scramble, there were a couple communication errors where he communicated and made a check of protection, and we did not execute it completely the way it needed to –  a couple new guys in new places.

“The execution piece was also part of that. Just we’ll watch the film, and there might have been a time or two where – just make sure you don’t run yourself out of the pocket when you don’t have to. But really that’s not really what it was all about. They did a nice job. They brought it (pressure) almost every play, and when you throw it as much as we did again tonight, they’re going to cause some problems for you.”

While the offensive line struggled to offer up some pass protection for Haener, the unit rarely performed in the run game either.

Star running back Ronnie Rivers was out for most of the game still suffering from an injury sustained last week. He did appear for a few plays in the 3rd quarter near the goal line in an attempt to break the program’s all-time career touchdown record, but he only touched the ball once and was stuffed for a loss.

Unfortunately for Rivers, the loss likely represents the last opportunity he had to break the record, assuming he makes the jump to the NFL and does not return next season.

Running back Jordan Mims got the start in place of Rivers and broke off an 84-yard touchdown run in the 2nd quarter. Outside of that run, however, Bulldogs running backs only managed a combined 38 yards on 11 total carries.

As bad as the offensive line played, the defense didn’t do the ‘Dogs any favors, even though the Lobos were using their fourth-string quarterback – Isaiah Chavez – a walk-on true freshman who had 10 pass attempts all season coming into this game.

Chavez finished 14-18 for 196 yards and 1 touchdown, and he added 95 rushing yards and another touchdown on the ground.

Fresno State also had no answer for Lobos running back Bobby Cole, who gashed the ‘Dogs 138 rushing yards and 3 touchdowns.

“Once they got their run game going, the play-action starts hitting you, and you start getting eyes in the wrong places,” DeBoer said. “There’s just got to be that deep belief and trust in each other, and we’re still trying to find that. Their offense does some good things schematically, and they took advantage of some eyes in the wrong spots at times. A lot to learn from, a lot to build on.”

Although the Lobos struggled to put points on the board all season, they ran big-play after big-play Saturday night. New Mexico had two passes of over 40 yards and seven runs that went for 10 yards or more, including a 54-yard run by Chavez.

Had Fresno State’s defense put together some timely stops in the first half, the Bulldogs could have easily pulled away and never looked back. But every time the ‘Dogs scored, the Lobos were right there to answer back.

Given the defensive deficiencies, Fresno State’s offense would have had to play a near-perfect game and score on practically every drive. That was an unreasonable expectation to meet, and when Haener and the ‘Dogs slowed down in the 4th quarter, the Lobos pounced and never looked back.

DeBoer pointed to several key injuries sustained throughout the game, which forced players to step onto the field in roles that they had not been in all season.

The loss marks the end of a tumultuous 2020 for the Bulldogs. DeBoer said that there has been no communication with him regarding any attempts to find another team to play against next weekend in an effort to make up for previously cancelled games. If the Bulldogs were even able to put something together, DeBoer cast doubt on Fresno State’s ability to play any more given the number of injuries plaguing the team.

“Right now we’re so thin with where we’re at,” DeBoer said. “We aren’t even travelling close to the full amount of guys on the roster that you can travel for a conference game. I know we got a few more guys dinged even tonight, so a lot of that is just the thinner we become on our roster, the more reps guys are having to play, and the more they’re becoming fatigued. That’s kind of where we’re at right now.”

And at 3-3 the Bulldogs could conceivably receive an invitation for a bowl game, but with the pandemic as an ever present issue and many bowl games having already been cancelled, this – in all likelihood – is it.